Naghsh -e Jahan Square (Naghsh stands for Image and Jahan for the World), is situated at the of Isfahan city.

The Square with a Bazaar, a Palace and two Mosques listed as UNESCO's World Heritage Sites in 1979. It is impossible to find a cultural tour to Iran without visiting this magnificent square.

In 1598, Shah Abbas decided to move the capital city from Qazvin to Isfahan. Therefore, he ordered to build the square in the of the city with all needed for living, so it would be displayed to everyone from all over the town.

The square is surrounded by two floors Bazaar, Shah Mosque on the south side of the square, Ali Qapu Palace on the west side and Sheikh Lotf Allah Mosque on the east. There are several gates around the square, however, the main entrance is the Keisaria gate on the northern side.

The reason to choose this gate as the main one is the great view you will have when entering the Naghsh -e Jahan square.

The square used to be a place of meeting people with the King. It was also used for royal ceremonies and official meetings of the King with representatives of other countries. As well as this application, since Isfahan was a vital point in the Silk Road, the Bazaar was the main place for doing business for people from all over the world.

Masjed-e Shah (Shah Mosque) or as it called today Imam mosque is an excellent example of Islamic Architecture in Iran. The Mosque is surrounded four Ivans and arcades. The walls are all decorated with mosaic tile. Nowadays, the mosque only used on Fridays for Friday Prayer.

The Sheikh Lotf Allah Mosque is named after Sheikh Lotfallah, a religious leader from Lebanon. He was invited to Isfahan by Shah Abbas who paid special attention to him. The mosque doesn’t have a minaret or a courtyard because it was not open to the public and only King’s family had the authority to use it.

Ali Qapu Palace (Ali is an Arabic word stand for Great and Qapu a Turkish word for a portal or royal) was the pavilion for king and his family residence. The Ali Qapu palace has 48 meters’ height and six floors with a wide terrace. The rich wall painting with the design of flowers, animals, and birds was done by Reza Abbasi. 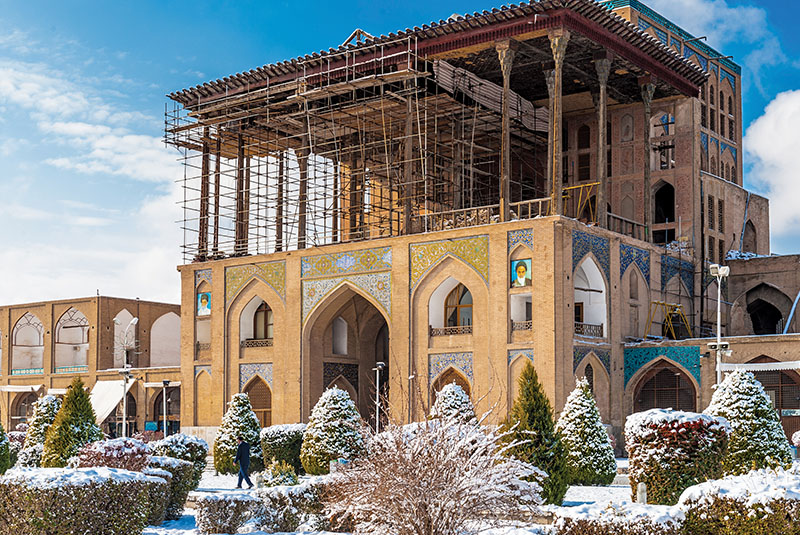 The sixth floor is not visible from the outside since it was the place for holding royal reception and banquets. The largest rooms are found on this floor. This floor is also called the music room because various ensembles performed music and sang songs in this room.

The Bazaar which was built on two floors all around the square gave the square great protection. The second floor never had a practical use and it seems to be constructed only to stop viewing the outside of the square when you are in.

When to Isfahan, consider at least half a day to explore the great place of Naghsh-e Jahan Square and all around it.