Abgoosht & Dizi, The Most Traditional Persian Foods in Iran

Abgoosht (Ab stands for water and for meat) is one of the most traditional stew in Iran.

When Abgoosht cooked and served in stone crock pots it’s called Dizi. Whether the name is Abgoosht or Dizi, you should absolutely try this traditional cuisine when you travel to Iran.

The food has been cooked for so many years and therefore ingredients and recipe of it has been changed in different part of Iran. It used to be cooked by lamb, onion and chickpeas only, but nowadays tomatoes and potatoes also added to the stew. However, the way it’s served is still remained the same in all over the country. 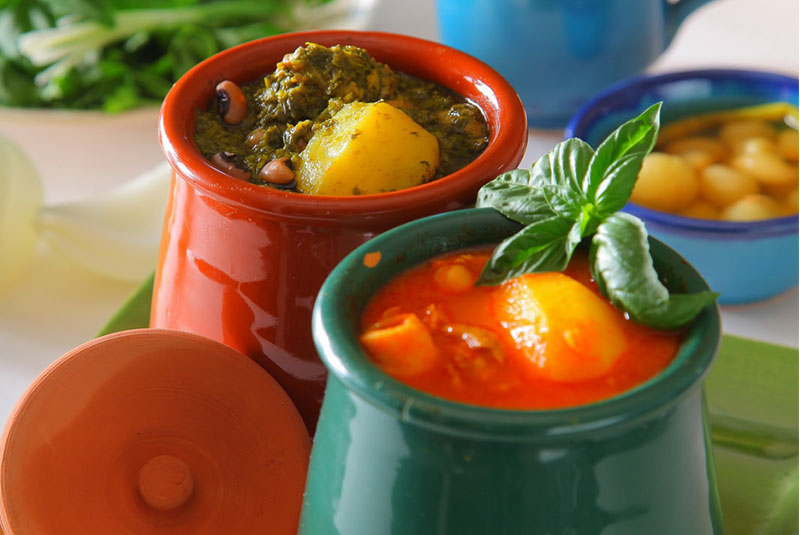 When cooked, serving a special custom, people eat both Abgoosht and Dizi in two part. First, they split the soup or broth from the remaining ingredients and poured it into a bowl, then put small pieces of bread (usually Sangak) into the soup and eat the mixture with a spoon. The process of adding bread to the soup is called “”. Then they mash the rest of and eat it with onion, pickles, basil, and radish.

As mentioned, in different cities of Iran, they have their own ingredients and recipe to cook Abgoosht & Dizi, let’s check some of those:

In Kerman, they cook Abgoosht with meat, lots of and some garlic, there don’t add any potato or beans in the stew.

Abgoosht Bozbash is another type of Abgoosht which is mostly cooked in Tabriz. Instead of chickpeas, they use cowpea and also add chives, parsley and fenugreek. This Abgoosht is mostly green rather than red the of one.

Another type of Abgoosht is called Abgoosht Baghi (Bagh means garden). In addition to all traditional ingredients, different types of fruits such as peach, apple, cherry and apricot added to the ingredient.

You may find some other type of Abgoosht & Dizi while in Iran, here we mentioned the most popular ones in the country. All we can suggest is try the traditional cuisine!