Traditional and Folklore Music of Iran

Iran has different styles of traditional and folk music. In every city and village from north to south, and west to east, there is no single place without its own traditional music.

In addition, with rich poetry in Iran, folk music has a great connection with Persian poetry too. Generally speaking, Iranian music is divided into two groups, traditional music and folklore music. Here we are going to write about these two types of music in Iran, the history of music in Iran, and Iranian instruments. 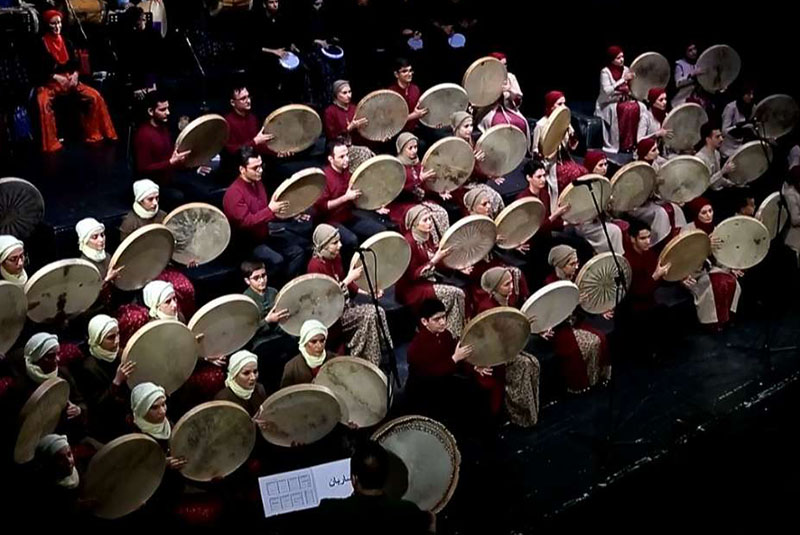 Different Types of Music in Iran

In Iranian traditional music, the singer uses a lot of vocals, which means the vocalists play a major role in expressing the relevant mood. This type of music in Iran has a history of approximately a thousand years. However, the traditional music of Iran which we know today is from the Qajar Dynasty. Up to that period, the existence of traditional music was mostly in the royal court. The first known recording of traditional music of Iran happens at the end of their ruling in Iran at the beginning of the 20th century in Tehran. Iran's traditional music continues to function as a spiritual tool, as it has throughout history, and much less of recreational activity. It belongs for the most part to the social elite, as opposed to the folkloric and popular music, in which the society as a whole participates.

Persian traditional songs are normally performed while the musicians are seated on rugs and cushions with fine decorations. In some cases, candles are lit.

This music is categorized into seven major moods (which is called Dastgah) with many sub-moods. The name of these seven Dastgahs is Segah, Chahargah, Rast-Panjgah, Sur, Mahur, Homayun, and Nava.

Folklore music in Iran refers to the music that transmitted through generations among the citizens of the country. This type of music consists of tunes that exist in numerous variants which are in accordance with the cultural diversity of the country's ethnic and regional groups.

Folklore music in Iran is categorized in various themes and includes historical, social, religious, and nostalgic contexts. There are folk songs that apply to particular occasions, such as weddings and harvests, as well as lullabies, children's songs, and riddles. The poetic meter of do-beyti ("two-couplet"), often sung in the Iranian vocal mode of avaz-e dashti, is closely associated with Iranian folk tunes.

Persian folk music mostly is not written down and people go to their families, especially the elderlies to learn the songs from them. 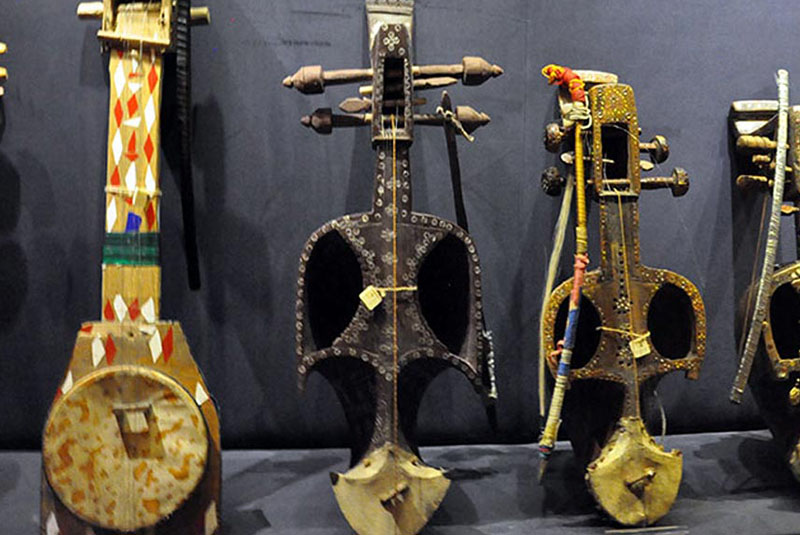 In every part of the country, folklore music is different from the other regions. For instance, in the west of Iran, you can find Tanbur in the Kurdish area. In the east south of the country, Baluch folk music (tanburak, rabab, and gheichak as the main instruments) is very popular.

In the coastal part in the south of Iran, the most interesting one is Zar. It is ritual music which is believed to cure some diseases.

The History of Music in Iran

According to the historical evidence, musical instruments were used in Iran since the Elamite Era around 800BCE. Alexander the Great mentioned that he witnessed many melodies and instruments upon his invasion, and playing music had an important role in religious affairs.

During the Achaemenids (550-320 BCE), music served an important function in worship. Since the Sassanid Empire, different types of instruments were used in the regions, like harps, lutes, flutes, bagpipes, and others. Under Sassanid rule, modal music was developed by a highly significant court musician, Barbad, called the Khosravani. The first written evidence of Persian music is from the Sassanid Period.

The Arrival of Islam

With the advent of Islam in the 7th century A.D., Persian music became a formative element in what has since become "Islamic civilization". Persian musicians and musicologists overwhelmingly dominated the musical life of the Eastern Islamic Empire. At the same time, Baghdad became the center of Persian music.

In the 13th century, Arab-Persian music theory became largely standardized into what became as the Systematics or Iraqi school (since it developed in the court of Baghdad. The pioneer of this school was Safi Al Din Ormavi (from northwestern Iran).

The Mongol invasion of Persia (in 1220), dramatically changed the socio-political environment of the region. During this period, the musical style of Iraq gradually adopted the structure and emotional language of ghazal (a form of Persian poetry) and poetry became the main source of avaz (vocal section).

At the end of the fifteen century, with the rise of the Safavid dynasty, and by the increasing influence of Shiism, music in Persia declined. The court still patronized musicians, but their art became subject to the authority of Shiite clerics, who viewed it with suspicion. The musical traditions were kept alive by Sufis and performers of taziye (Shiite passion plays). 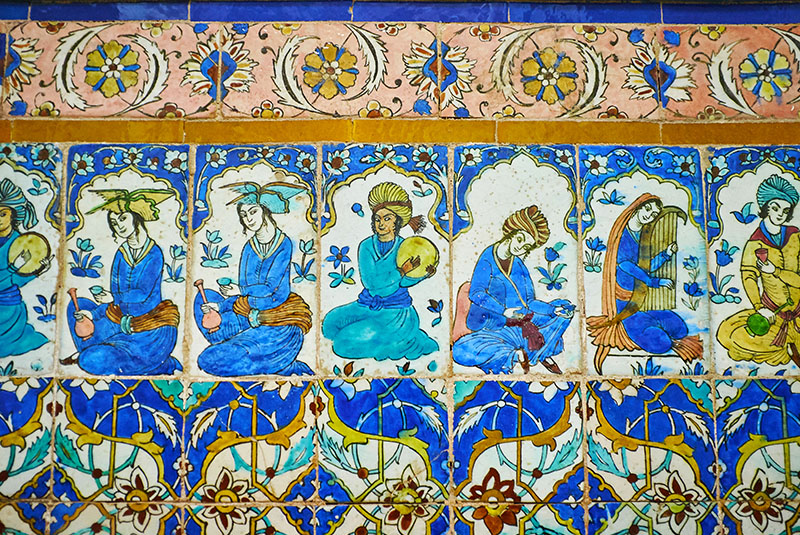 In the 19th century, Qajar King Nasser al-Din Shah was a great patron of music. In 1862, a process of Westernization began when, Nasser al-Din Shah ordered the establishment of a military band, such as he had seen in Europe playing overtures, marches, polka, and waltzes. A French musician, Alfred Lemair, was hired to run a traditional ensemble of indigenous shawms, horns, trumpets, and percussion into a Western concert band. He was so successful that by the end of the 19th century, the music school in Tehran taught Western instruments and music theory.

The Islamic Revolution to the Present

After the Islamic revolution, institutions teaching Western music were closed, the Tehran Symphony Orchestra was disbanded and, in an attempt to eliminate pop and hybrid love songs, no music at all was permitted on the radio.

Many young Iranians have again become interested in traditional music and the ban on Western music and even pop music has now been lifted. Today, music is taught in state-funded universities and many private institutions and classes throughout the country. Many Iranians play musical instruments, and the social standing of musicians is now much higher than in the past.

Daf is one of the most ancient frame drums in Asia and North Africa. As a Persian instrument, in the 20th century, it is considered as a Sufi instrument to be played in Khanghah-s for Zikr music but now this percussion instrument has recently become very popular and it has been integrated into Persian art music successfully.

Dotar (literally means "two strings") is played mainly in the north and the east of Khorasan, as well as by the Turkmen of Gorgan and Gonbad. The instrument remains the same but its dimensions and the number of its ligatures vary slightly from region to region. Two types of wood are used in the fabrication of the dotar. The pear-shaped body is carved out of a single block of mulberry wood. Its neck is made of either the wood of the apricot or the walnut tree. It has two steel strings, which in the past were made of silk or animal entrails.

Kamancheh is a bowed spike fiddle with four metal strings. The body consists of a wooden hemisphere covered with thin sheepskin membrane. The instrument is highly ornate and is about the size of a viola. Kayhan Kalhor is an Iranian Kamancheh player, composer, and master of classical Kurdish and Persian traditional music. 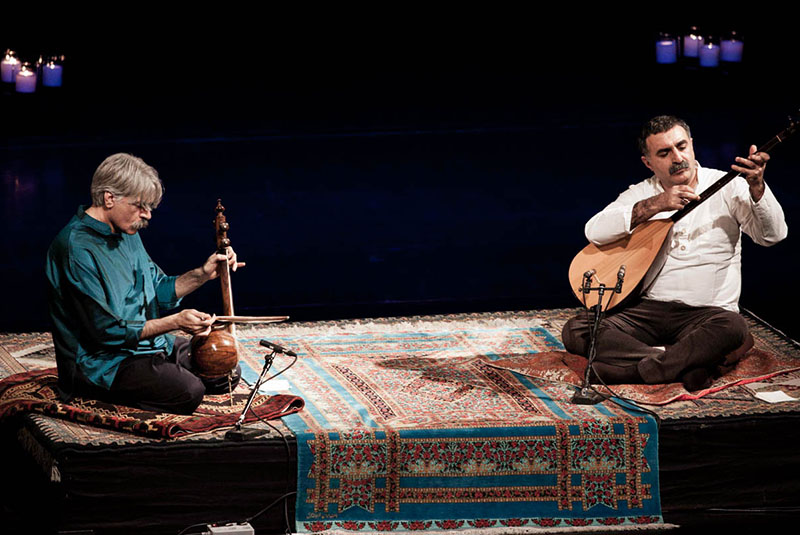 Nay is the Persian knotgrass reed with five finger holes in front and one thumb hole in the back. It has a range of two and a half octaves. The upper end is covered by a short brass cylinder, which is anchored in the tiny space between the upper incisive of the player. Sound is produced when a stream of air is directed by the tongue toward the opening of the instrument.

Santur is a struck zither in the form of a shallow, regular trapezoidal box. There are several sound posts inside the box and two small rosettes on the top panel which help to amplify the sound. The santur has 72 strings, arranged in groups of four, i.e. each of four closely spaced strings are tuned to the same pitch. Each group of four strings is supported by a small, movable, wooden bridge; the bridges are positioned to give the instrument a range of three octaves.

The ancestry of the Setar can be traced to the ancient tanbur of pre-Islamic Persia. It is made from thin mulberry wood and its fingerboard has twenty-five or twenty-six adjustable gut frets. Setar is literally translated as ``three strings''; however, in its present form, it has four strings and it is suspected that setar initially had only three strings. Because of its delicacy and intimate sonority. Setar is the preferred instrument of Sufi mystics.

Tar is a plucked stringed instrument (a long-necked lute) that is played in Iran (Persia), Caucasian countries (like Azerbaijan, Armenia and so on) and central Asia (like Tajikistan). It exists in two forms now, the Persian (that is named Tar-e-Shiraz or Irani) and Caucasian (that is named Tar-e-Ghafghaaz). The Persian tar is carved from a block of mulberry wood and has a deep, curved body with two bulges shaped. 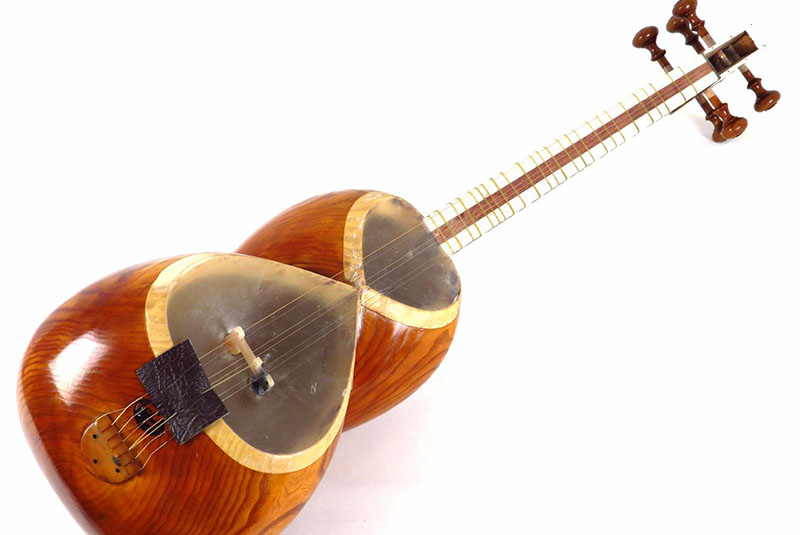 The most popular percussion instrument in Persian music today is a goblet drum known as the Tonbak. It is a large wooden instrument with a goatskin head. It has a squared-off shape and produces lower-pitched and softer tones due to its size and skin being put on with less tension.

Ghanoon is the Persian zither. It is a flat trapezoidal wooden box, with twenty-four strings in triple fastened at its rectangular side on one end and to pegs on the oblique side on the other. The player to make slight changes in pitch manipulates small levels lying below each course of strings. The strings are plucked with two horn plectra, one on each index finger.