Top 10 Museums to Visit in Tehran

In every city, there are numerous places to visit. However, considering the time limit of every travel, it would not be possible to visit all the places and every passenger should plan to visit the best and must-see places

this article, we are going to introduce top 10 museums to visit in Tehran.

The "Treasury of the National Jewels" is an invaluable collection of the most expensive jewels in the World which is owned and governed by the Central Bank of Iran.

It is highly recommended to visit the Golestan Palace first, and then visit the National Jewelry Treasury. At the Golestan Palace, you will see paintings and photos in which Safavid and Qajar monarchs adorned themselves with magnificent . This way, you better understand the history behind each item and recalls memories of bitter-sweet victories and defeats. 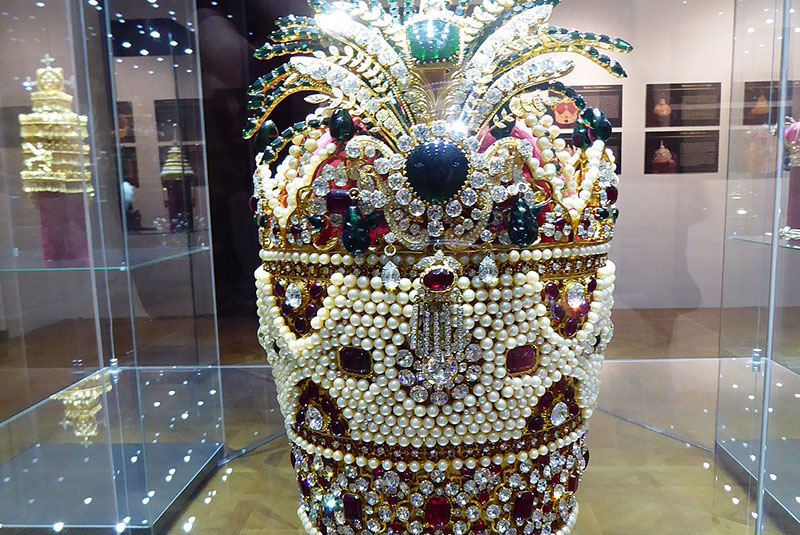 Most of the items in the collection date back to the Safavid dynasty. Later, the Qajar and Pahlavi rulers enthusiastically added to the jewels collection, which grew to be so valuable that in the 1930s it was transferred to the National Bank of Iran (now the Central Bank of Iran) as a reserve for the national currency. One of the most valuable diamonds at the museum is the Darya-ye Nur (Sea of Light), which is a pink diamond weighing 182 carats and said to be the largest uncut diamond in the world.

Guidebook of the museum is available at the entrance bookshop in English, French, German, and Arabic.

One of the most beautiful sites in Tehran is The Golestan Palace. The Palace is a masterpiece from the Qajar dynasty which successfully represents the integration of earlier Persian crafts and architecture with Western influences. It is one of the oldest complexes in Teheran, to home the family of Qajar which came into power in 1779 and named Teheran as their capital city. The walled palace inscribed as a UNESCO World Heritage Site in 2013.

In the middle of the garden, there are featuring pools as well as planted areas. The Palace’s most characteristic features dated back to the 19th century and represent a combination art and architecture style of Qajar era and elements of the 18th century, which is still a major source of inspiration for Iranian artists. and architects to this day.

The complex of Golestan Palace included seventeen sites, as for palaces, museums, and halls. Almost all of these sites were constructed during the governor of Qajar dynasty in Iran, with different usage. In the following article, we are going to introduce these sites.

The historical and cultural complex of Sa’dabad is a collection of mansions and palaces which is located in refreshing and good weather foothills of Mount Tochal and the lush and green valley of Darband in Tajrish district, North of Tehran. The complex has about 180 hectares of natural forest, springs, aqueducts (Persian Qanat), gardens, greenhouses, and streets. Sa'ad Abad was built during the Qajar period and the Qajar kings used this fresh garden and beautiful palaces as their country house in the summertime. During the Pahlavi dynasty, there were some other constructions and each of all those 18 palaces were the residence of Pahlavi’s family members. The newest palace in this complex is Leila Pahlavi Palace, owned by the youngest daughter of Mohammad Reza Pahlavi.

4: Glassware and Ceramic Museum of Iran

The main establishment of the museum is a two-story octagonal building with a combination of Iranian style and European architecture of the 19th century.

The glass and clay works which exhibited at the museum is among the rare collections in Iran. It comprises clay pots dating back to the 4th millennium BCE. European glassworks, belonging to the 18th and 19th centuries, are also parts of this collection which is on display in six halls and two entrance halls in separate sections depicting different historical eras and subjects.

Tehran Museum of Contemporary Art (known as TMoCA), is one of the largest art museums in Iran. More than 3,000 valuable items including European and American paintings, drawings, and sculptures from the 19th and 20th century are kept at this museum. There is also a wonderful collection of Iranian modern and contemporary art.

In 1977, the museum was opened by Empress Farah Pahlavi. According to her, the idea for opening such museum first came to her mind when she was in conversation with an artist; Iran Darroudi at the beginning of the 1970s. She personally met numerous Iranian and international artist to select and collect the items with a budget from the National Iranian Oil Company. Currently, it is believed that the museum has the most valuable collection of Western modern art outside Europe and the United States with a value of approximately £2.5 billion.

Initially, in 1977, the Reza Abbasi Museum was opened, but due to the changes in its internal decorations and further expansion of its exhibition space it was closed and open many times during the next 8 years. Finally, in the year of 2000, it was opened with the current situation under administrated of Iranian Cultural Heritage Organization. 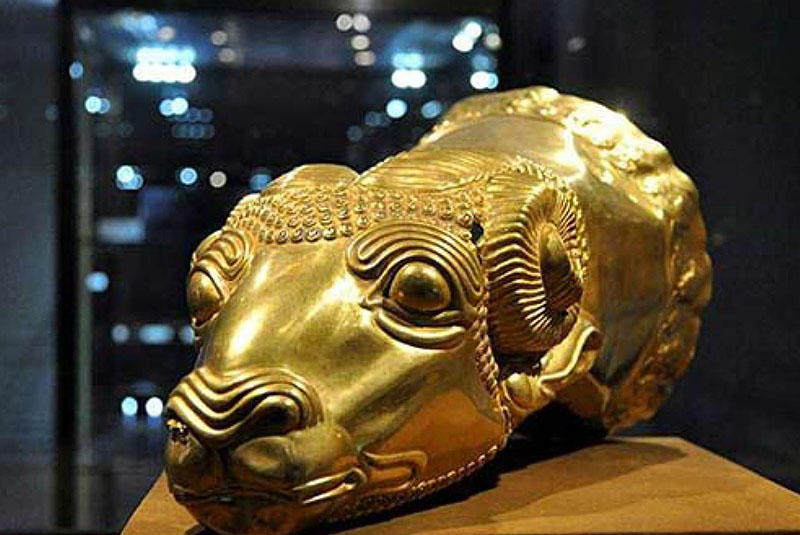 The items that are collected in this museum belong to a period from the 2nd millennium BC to the early 20th century which is the same time as the end of the Qajar period. The Reza Abbasi Museum is unique in the arrangement of its items since they are arranged chronologically, so visitors can have a chance to observe the development of art, culture, and technology during this time interval. The objects exhibited in this museum include artifacts made of baked clay, metal, and stone from the pre-historic times to pottery and metal objects, textile and lacquer painting belonging to the Islamic period. Other artworks on display in the RAM are paintings on canvas and paper, manuscripts, and jewelry from the pre-Islamic period, besides art and technology and calligraphy works of the Islamic period.

The National Museum of Iran is an institution formed of two complexes; the Museum of Ancient Iran and the Museum of the Islamic Era, which was opened in 1937 and 1972, respectively.

The institution hosts historical monuments dating back through preserved ancient and medieval Iranian antiquities, including pottery vessels, metal objects, textile remains, and some rare books and coins. It also includes a number of research departments, categorized by different historical periods and archaeological topics. The oldest artifacts kept at the museum date back to the Lower Paleolithic period. The most important Upper Paleolithic tools dating back about 30,000 to 35,000 years ago. 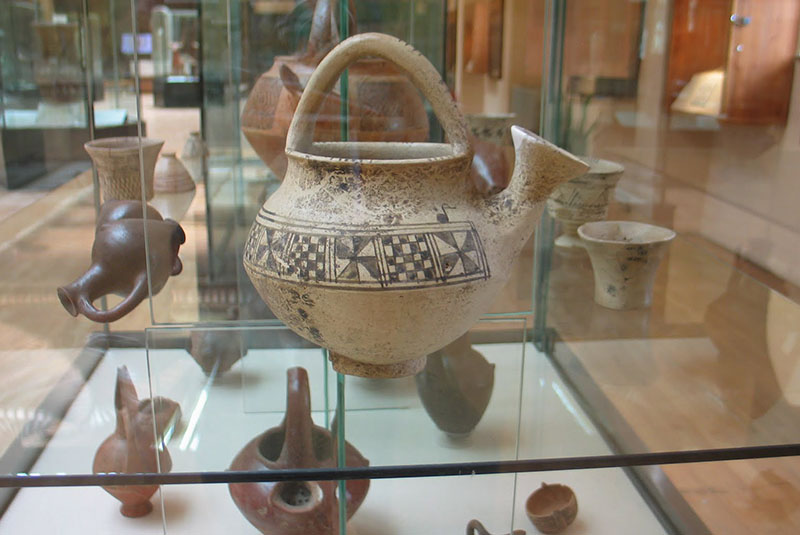 8: The Carpet Museum of Iran

In 1979, the Carpet Museum of Iran opened by Empress Farah Pahlavi. The museum building resembles the carpet-weaving loom which is constructed two floors to display different types of carpets, kilims, and handmade rugs.

The first-floor hall is a permanent exhibition and the second one belongs to temporary exhibitions of carpets or carpet-related subjects. There are more than 100 pieces dating from the 17th century to the present day which makes it the largest place to see a full range of regional patterns and styles founded in Iran. Some of the patterns are very unique, such as the Tree of Life with Kings and Notables.

There is also an invaluable library with more than 7000 books to help researchers and enthusiast. At the movie-house, directories in the field of knotting carpet and designing kilim motifs can be watched. To preserve the carpet-related arts and techniques, the museum offers different courses for teaching carpet making, designing, repairing and darning.

In the northern part of Tehran, there is the Museum of Music which is surrounded by a beautiful garden. The museum was opened in 2008, in a three-floor building. At the place, you can see and hear all sorts of Iranian instruments from centuries ago till the current time, even the instruments that are invented recently. With the audio guide at the museum, you can listen to each of the items you like. The place is great to know the history of Persian music.

The Moghadam Museum is located at the heart of Tehran which exhibits numbers of splendid items such as gems, textiles, paintings, and prehistoric objects. With the traditional Iranian architecture, there is a small garden, several turquoise ponds, and lots of trees the yard.

The house was originally built during Qajar dynasty, around 200 years ago. The owner was Ehtesab--Molk, one of the authorities of Nasseredin Shah.