Tehran has been the capital city of Iran for more than two centuries, and as a result, there are a number of palaces which were used by kings and princes of both Qajar and Pahlavi Dynasty.

Niavaran Palace Complex is one those, which is situated at the northern part of the city at a convenient area and magnificent garden. There are many palaces, buildings, and monuments in the area of this complex. Here we are going to briefly introduce this complex. 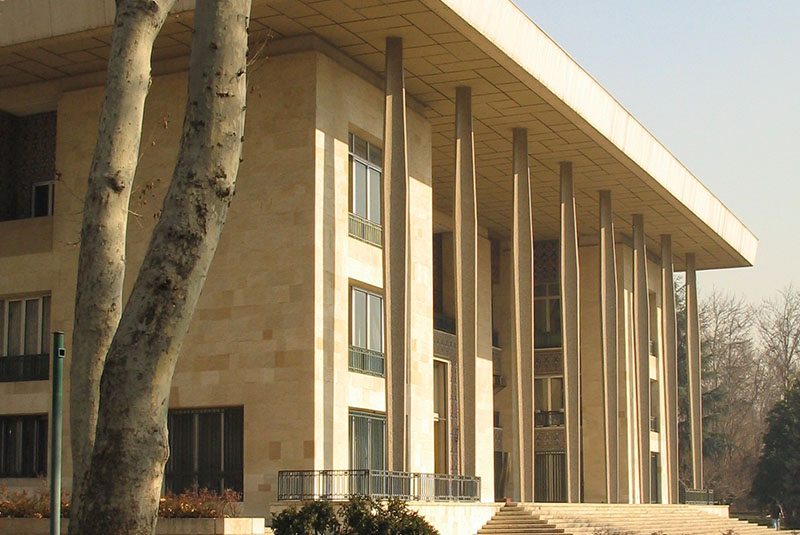 The history of Niavaran Palace Complex

Fathali Shah Qajar was the first person who ordered to build a garden at the same place as it is now to be used by him and his family during summer. At the time of construction, the garden was outside the city of Tehran with pleasant weather and a great view all around the place.

Mohammad Shah Qajar also built a small and simple building in the same garden. Later, in 1850, Nasser-al-Din Shah Qajar ordered to build a two-story building at the garden. He named himself the landlords, “Saheb Qaran” and as a result, he named the palace "Saheb-Qaraniyeh Palace". The last building which was built at the Niavaran Palace Complex was Ahmad Shahi Palace.

During the governor of Pahlavi II, all buildings except for the Ahmad Shahi Palace were destroyed and the current Niavaran Palace was built at the northern part of the garden with a modern style to be used as the residence of the royal family of Mohammad Reza Shah. The construction of this palace was finished in 1968. The Ahmad Shahi Pavilion (or Kushk-e Ahmad-Shahi) was then used as an exhibition center.

The complex is located in a very large garden with an area of about 11 Hectares in the northern part of the city. It has a lot of historic charm and natural beauty.

The main palace was designed in 1958 by an Iranian architect named Mohsen Foroughi. While the design of the palace and its interior design is inspired by Iranian art, modern style and design also used at the palace. Its decorations have also been inspired by pre and post-Islamic art. The internal decoration and furniture of the palace have been designed and implemented by a French group. 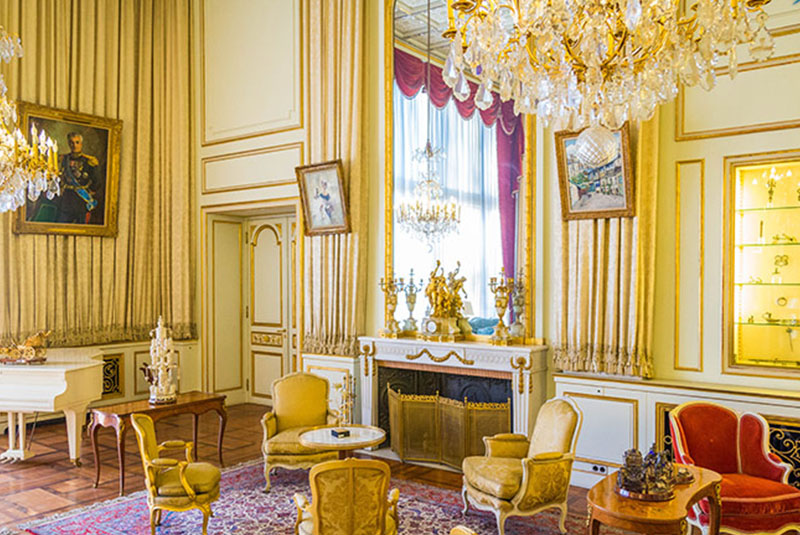 At the moment there are some museums at Niavaran Palace Complex. These museums are Niavaran Palace Museum, Ahmad Shahi Pavilion, Saheb Qaraniyeh Palace, Jahan Nama Museum, a private library, Museum of Royal Clothes and Fabrics and Museum of Royal Family’s Automobile. There are also other cultural, historical and natural attractions including the Blue Hall, Private Cinema, Jahan Nama Gallery, and Niavaran Inscription Garden at the complex.

The construction of the Niavaran Palace Museum started with an Iranian plan as it meant to be a reception hall for the royal family’s guests and VIPs. However, while the palace was under construction it becomes the personal residence of Mohammad Reza Shah and his family. They were all stayed at the building until the last days of their living in Iran.

There are three floors at the main palace, including ground floor (a private cinema, dining room, guest room, waiting room and Blue Hall), first floor (an office, a conference room, Farah Diba’s secretary’s room, Leila’s bedroom and her retainer’s room) and second floor (the royal family resting rooms). All of the rooms and areas at this palace are decorated with precious paintings, carpets, and gifts received from different countries. In the stairways to the second floor, there is a room where Mohammad-Reza’s military uniforms and official suits and his medals are kept.

Ahmad Shahi Pavilion covers an area of 800 square meters. The two-story pavilion was built in the last days of the Qajar Dynasty to be used as a private resting retreat for Ahmad Shah. The entrance of the pavilion is situated in the southern side of the building, which is joined to the pavilion by various stairs. During the Pahlavi II, the pavilion was completely redesigned and all the furniture was replaced by a modern one. 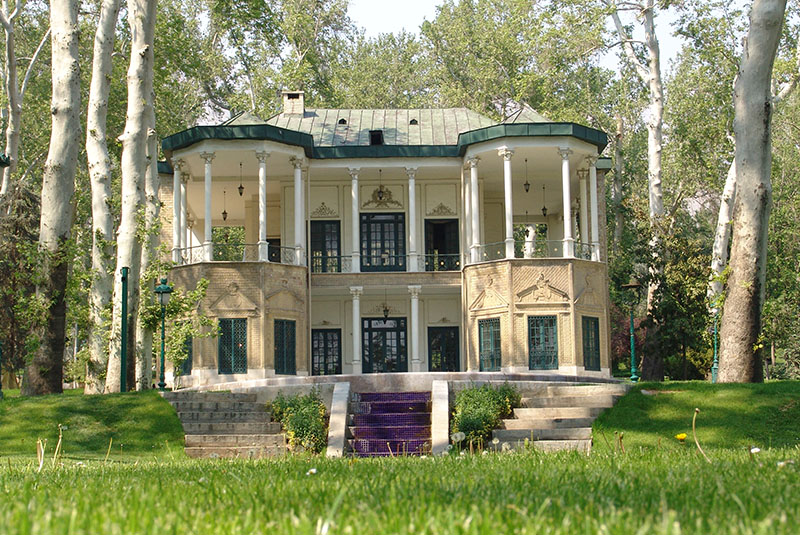 There is a hall, a marble pond, six rooms and two corridors on the ground floor. There are also some decorative items made of silver, bronze, ivory, and wooden that have been exhibited in this place. At the second floor, there is also a central hall and a four-sided veranda.

In 1850, Nasser-ed-Din-Shah ordered build the Niavaran Palace. At the 31st year of his governor, he called himself Saheb Qaran and therefore, named this palace as Saheb-Qaraniyeh. Later, Mozaffar-ed-din Shah redesigns the building and destroyed some part of it. 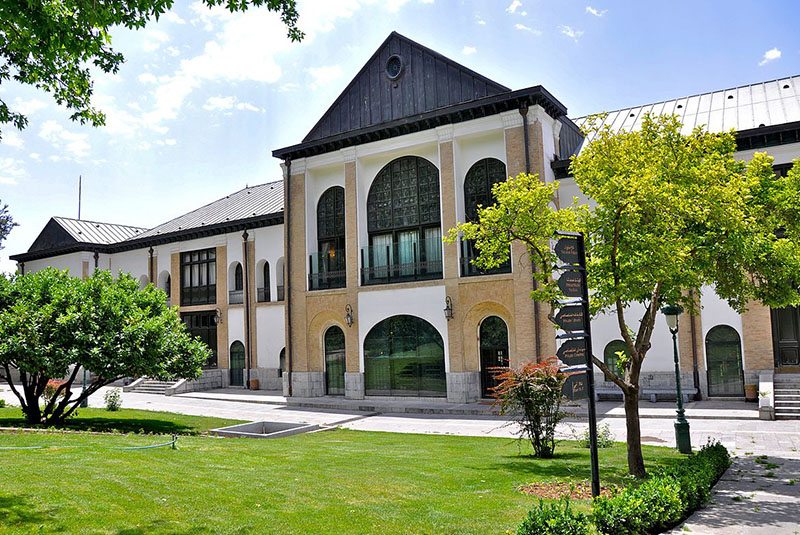 Under Pahlavi I, this palace was renovated for the marriage ceremony of Mohammad-Reza Pahlavi with Princess Fawziah. Under Pahlavi II, Farah Diba made some minor changes to the internal decorations. All the doors and windows of this building are decorated with colorful glasses. The palace was repaired in 1995 and opened to the public as a museum in 1998.

In 1976, a section in the western part of the Saheb Qaraniyeh Palace was allocated to the received souvenirs and items from the governments of different countries, and all the artwork that Farah Diba purchased. There are four halls on the ground floor and another one on the underground floor. There are exquisite paintings on wood featuring flower and bird pattern of Shiraz on the ceiling of the main hall.

All the items that are exhibited at the museum are in two sections including pre-historic and contemporary local and international artworks. 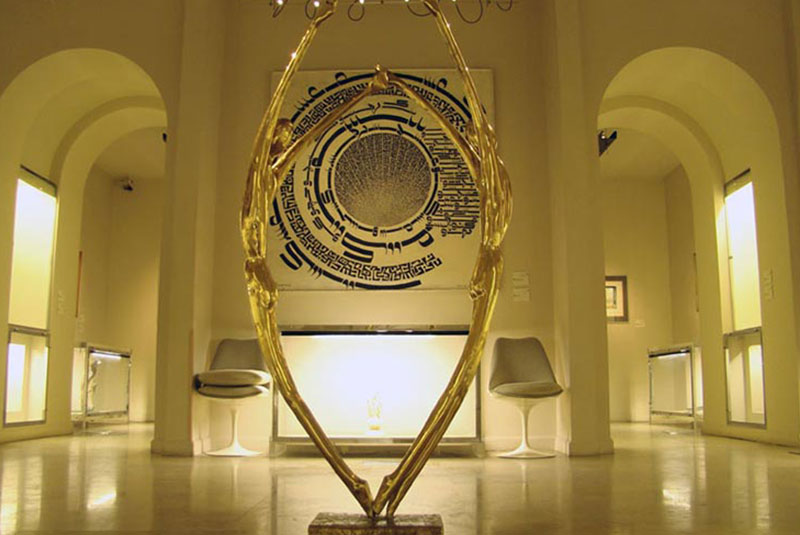 The private library consists of about 23,000 books, mostly in Persian and French languages, and specializes in books related to philosophy. The library was publicly inaugurated in 1994, on the occasion of International Museum Day. The building's design was materialized with a combination of bronze and special glass, based on the contemporary architecture prevailing in the 1970s. There are a reading room, the main library, and the audio-visual room at the building. In addition, the library includes an underground basement for storing paintings and other artifacts.

There is also a selection of more than 350 artwork at the library that represents the modern tendencies of Iranian art in the 1950s and 1960s.

Museum of Royal Clothes and Fabrics

The building of this museum was built at the northern part of the complex to be used as the guest house. However, after the Islamic Revolution, it becomes the museum of Royal Cloths and Fabrics of Royal Family to exhibit the artistic values of all these beautiful pieces.

At the Royal Family’s Automobile Museum all the Pahlavi's automobiles and their children motorcycles are exhibited.

The epigraphy section in the gardens of displays inscriptions from the pre-Islamic era, which has a history of more than 2,000 years. Like any other epigraph from the ancient world, these pieces are dated documents that have splendid artistic and cultural value for the country’s civilization. The replicas here show epigraphs dating back to prehistoric cavemen and how they have evolved via different time periods. The oldest epigraphs found in Iran date back to the Elamite and the Assyrian eras. The Code of Hammurabi was found in Khuzestan in Iran and the Darius scripture, the world’s largest ancient scripture (an epigraph in three languages) was also found in Bistoun in Iran.

Where to Eat Near Niavaran Palace Complex?

There are a number of restaurants and cafes near to the Niavaran Palace Complex. For example, Mestooran, Chaman Pizza and Nik Adnan Sandwich are just close to the place. If you are not that much hungry, you can also go to Tajrish Square where you can find Shemroon Kabab, Amoo Hooshang Cafe Restaurant, and Roohi Café and Restaurant.

Where to Stay Near Niavaran Palace Complex

As the Niavaran Palace Complex is in the northern part of Tehran, there are not too many hotels to choose from. The closest one is a 3-star Silk Road Apartment Hotel. Media Hotel, Borj Sefid Hotel, Diamond Hotel, and Baloot Hotel are also the ones that are not much far from the complex.

How to get to the Niavaran Palace Complex?