Golestan Palace; the Combination of Qajar and 18th Century

Most of the capital cities around the Globe are known as a megacity with lots of traffic, however, if you dig in there is always something to see and enjoy.

The same is true for the capital city of Iran; Tehran. If you are planning to visit Iran, we highly recommend staying in Tehran for at least two days. There are so many palaces, traditional bazaars, and National Museums in the city, for sure you enjoy. One of the most beautiful sites in Tehran is The Golestan Palace which is an outstanding example of Persian Architecture. Here, we are going to briefly introduce this amazing monument and talk about its history, architecture, and different sections of the complex.

The history of Golestan Palace

The Palace is all that remains of Tehran's Historical Citadel (Arg) which once glittered like a jewel. This historical Arg was built at the time of Shah Tahmasb I during the Safavid period, about 500 years ago. It was reconstructed at the time of Karim Khan Zand and later was chosen as the venue of the royal court and residence at the time of Qajar Kings.

In 1779, when Agha Mohammad Khan came into power as the first king of the Qajar Dynasty, he selected the Golestan complex as his palace and administrative center.

In 1797, Fath Ali Shah and became the first king to implement many major developments in Tehran. At the Golestan Palace, he initiated new building projects in addition to completing some of Agha Mohammad Khan's projects. 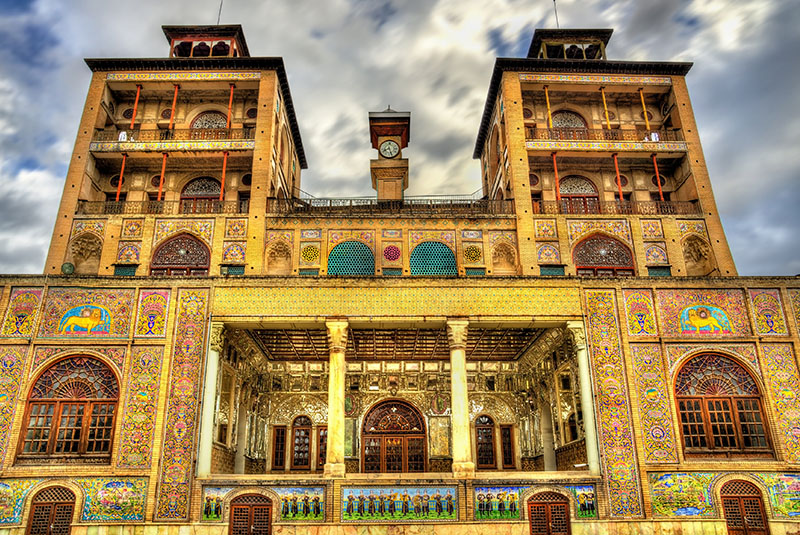 In 1848 Naser al-Din Shah was crowned in the Imarat-i Takht-i Marmar. During the fifty years of his reign, the Golestan Palace used to be his winter residence and center of government, underwent major changes. He made many modifications in the palace during his reign.

During the Pahlavi era (1925-1979), Niavaran Palace was built to house the royal family, and therefore the Golestan Palace was used for formal royal receptions. The most important ceremonies held in the Palace during that time were the coronation of Reza Khan in 1925 in Takht-i Marmar Hall and the coronation of Mohammad Reza Pahlavi and Farah Diba in 1941 in the Museum Hall.

From 1925 until 1945 a large portion of the buildings of the palace was destroyed on the orders of Reza Shah who believed that the centuries-old Qajar palace should not hinder the growth of a modern city. In the place of the old buildings modern 1950s and 1960s style, commercial buildings were erected.

The walled palace inscribed as a UNESCO World Heritage Site in 2013. Today, the palace is operated by the Cultural Heritage Organization of Iran.

The architecture of Golestan Palace

The complex, in its current condition, consists of two connected gardens, a smaller one on the west and a larger one on the east, and the buildings that surround them. The smaller garden on the west referred to here as the Takht e Marmar garden is oriented along a north-south axis, with a small degree of rotation along the northeast-southwest axis. A water channel runs down the garden's central axis. The larger garden here called the Golestan garden, is roughly square in plan (it is slightly longer along its east-west axis) and with a small degree of rotation to northwest-southeast. It features a water channel that runs north-south along its western side, near its border with the Takht e Marmar garden. 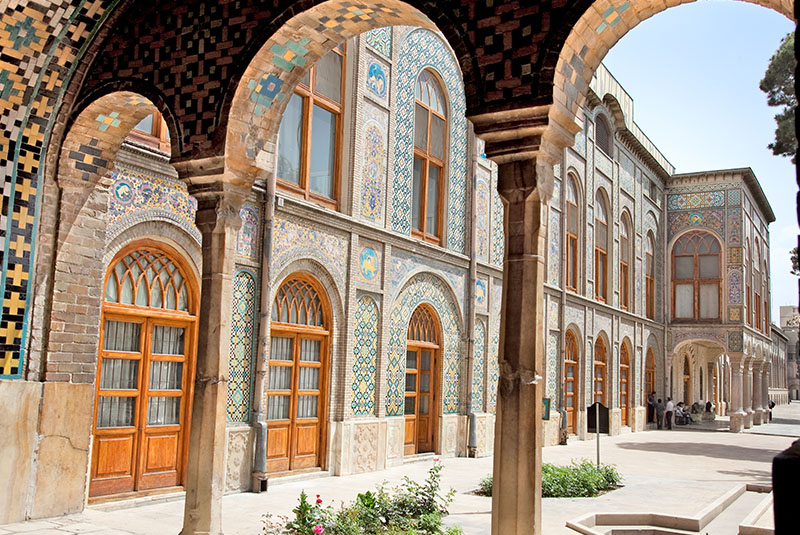 The complex of Golestan Palace includes seventeen sites, as for palaces, museums, and halls. Almost all of these sites were constructed during the governor of Qajar dynasty in Iran, with different usage. Here is the list and a brief introduction of each one.

This spectacular terrace was built in 1806 by the order of Fath Ali Shah Qajar. Wall decoration of terrace consists of paintings, marble-carvings, tile-work, stucco, mirrors, enamel, woodcarvings, and lattice windows. The Marble Throne in the middle of the terrace (iwan), is made of the famous yellow marble from the city of Yazd. It is made of sixty-five pieces of marble and was designed by Mirza Baba Naqash Bashi.

This site was part of the interior residence of Karim Khan Zand in Shiraz. It is a terrace with a small marble throne inside it. There used to be a small pond with a fountain in the middle of this terrace. Nasser ed-Din ShahQajar was the founder of this corner of the Palace. It is said that he spent much time here to rest.

There are so many items of European painters exhibited in this place. The Pond House used to be the summer chamber as it was a cool place due to the pumped water from the subterranean system of streams into small ponds inside the chambers.

The Hall name comes from the extraordinary mirror work of Iranian artisans and the chandeliers. It was built by the order of Nasser-ed Din Shah to replace another hall called Talar e Bolour ("the Crystal Hall").

This hall exhibits all the chinaware that were dedicated to Qajar kings by the European kings. Some of those are the most exceptional:

The chinaware that shows the Napoleonic Wars, dedicated by Napoleon Bonaparte.

The chinaware dedicated by Nicholas I of Russia.

The chinaware studded with gems and jewels, dedicated by Queen Victoria.

The chinaware dedicated by Wilhelm II to the Iranian crown prince.

A set made by malachite stone, dedicated by Alexander III of Russia.

This hall is one of the largest rooms in the complex which used to be the dining room. It is decorated with gifts from European monarchs. There is a beautiful watercolor piece by Mahmoud Khan Saba (Malek-o Shoara) which shows the exterior view of this hall during the Qajar period.

The most famous hall in the complex is the Mirror Hall due to its extraordinary mirror work. The decoration was designed by Haj Abd ol Hossein Memar Bashi (Sanie ol Molk). 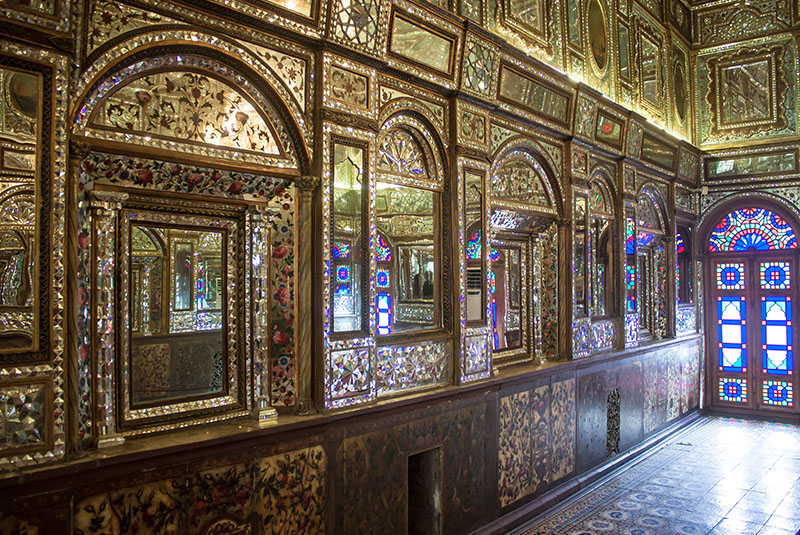 This is the only hall that originally designed to be a museum. However, its usage changed to a reception hall in the presence of the king. Ceiling and walls of the hall are decorated with plaster molding, and the floors are covered with mosaic.

The Diamond Hall is situated in the southern wing of the complex, next to the building of Windcatchers. There is exceptional mirror work inside the building which shines like a diamond, which is why it is called Diamond Hall. The construction of the hall dates back to Fath Ali Shah, however it was renovated by Nasser ed-Din Shah and some walls were covered by wallpaper imported from Europe.

The Building of Windcatchers was constructed during the governor of Fath Ali Shah. Since then major renovations and structural changes was done to the building. The Windcatchers were built to allow the cooling wind to move through the structure.

The edifice of the Sun (Shams ol Emareh)

The most stunning structure of the Golestan Palace is the Edifice of the Sun. It was built since Nasser ed-Din Shah wanted a structure from which he could have a panoramic view of the city. Therefore, the construction started in 1865 and the last two years later. The architect of the building was Ali Mohammad Kashi.

The building is situated under the Salam Hall, which was used as a warehouse for the chinaware and silverware which was dedicated to Qajar kings. Currently, in addition to the gifts, some rare objects are kept at this museum, including:

The helmet of king Ismail I, bow and arrows of King Nader, an armband of Fath Ali Shah, the collection of Qajar Seals, Agha Mohammad Khan's crown, and a decorated ostrich egg.

The Abyaz Palace (The White Palace)

Some precious gifts were sent to Nasser ed-Din Shah by the Ottoman Sultan Abdul Hamid, therefore the Qajar King decided to build a hall to exhibit these gifts, and so the Abyaz Palace was constructed.

It is said that Nasser ed-Din Shah, himself, was the designer of the structure.

During his trip to Europe, Nasser ed-Din Shah was very impressed by the exhibition of artifacts and valuable objects at European museums. When he came back to Tehran, he decided to build a museum hall to exhibit paintings, royal jewels, and other royal artifacts.

There is a collection of photos which mostly related to the time of the 19th-century. The photos were collected by the order of Naser ed-Din Shah.

At the second floor, you will find women wearing rural clothing from different areas in Iran. There are also paintings showing life situations, horse riding stuff, weaponry, and footwear on display.

The main access to the complex is from Panzdah Khordad Square on the southwest corner. If you prefer to go to the palace by public transportation, you can use metro line 1, and go to Panzdah Khordad Station.