The name "the Silk Road" takes the mind back to the past and evokes memories of a voyage where horse and camel caravans carry valuable commodities, including silk, and spices, across exotic and dangerous lands, desert oases, and wealthy cities.

The Silk Road has left legacies behind in many countries, including Iran. It still attracts many tourists and adventurers from different parts of the world who are interested in history and wish to travel along this route. If you are also interested in knowing more about this historic passage for dialects, cultures, and traditions or exploring the Silk Road and its heritages left in Iran, stay with us to learn more about this historic path.

What is Silk Road? 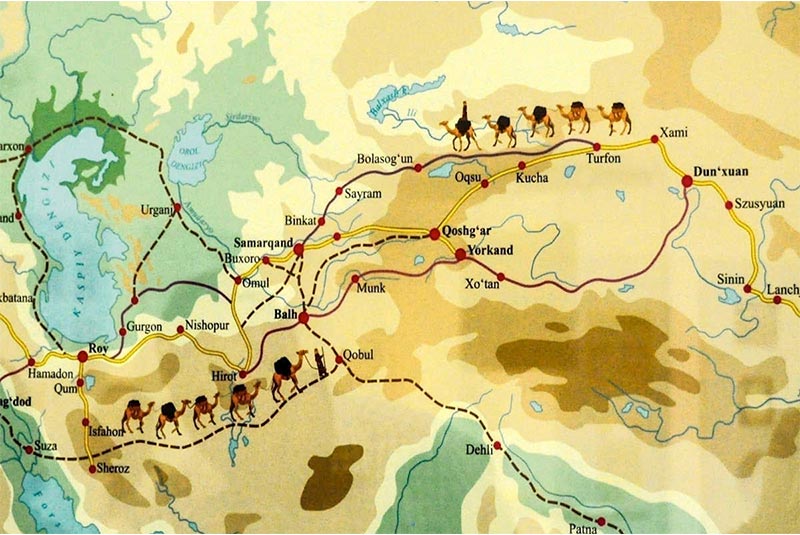 The Silk Road isn't an actual road or a single route. It was more like a combination of ancient routes connecting the East with the West. The silk road was a network of sea and land routes that facilitated the exchange of cultures, goods, and ideas. Thus, it was a vehicle of globalization. It played a crucial role in reshaping the ancient world and has left an indelible mark on the societies it linked, from Persia and India to China and Rome. The ancient silk road was one of history's most important trade routes. It was pivotal in the cultural interaction between Europe and East Asia regions for centuries.

It was used by many merchants for more than 1500 years, from 130 B.C.E., when the Han dynasty of China opened to trade, until the Ottoman Empire closed off dealing with the West in 1453 C.E. The Silk Road extended approximately 4,000 miles across some of the world's most formidable landscapes. Some parts of the Silk Road are registered on UNESCO's World Heritage List. 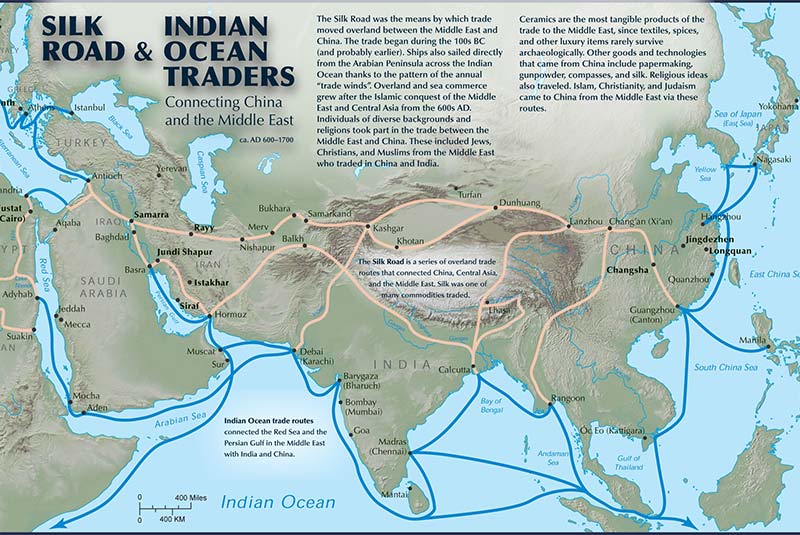 The Silk Road, also known as the Silk Route, was an ancient trade route connecting China and the West, transporting goods and ideas between the two great civilizations of Rome and China. Silk went west, wool, gold and silver went east. China also received Nestorian Christianity and Buddhism (from India) via the Silk Road.

Origin of the Term "Silk Road" 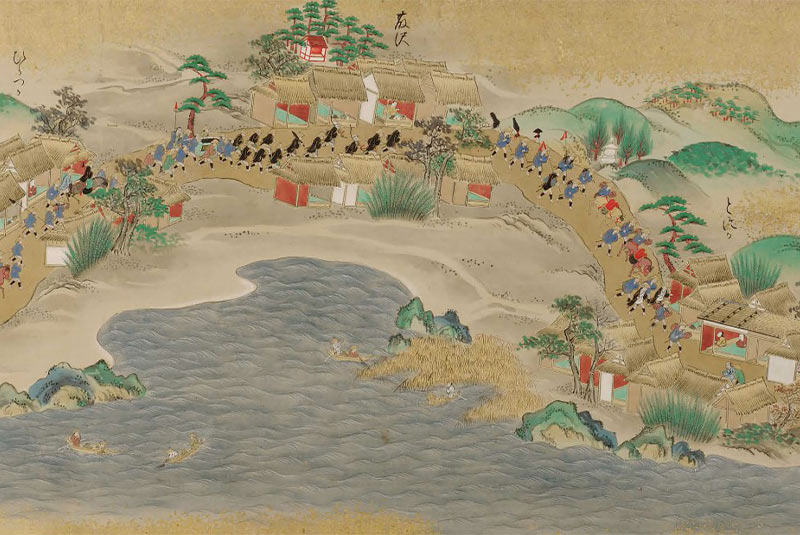 The mystical term "the Silk Road" is a modern invention. It is a 19th-century term coined by the German geographer and historian Ferdinand von Richthofen in 1877 C.E. when Europe was captivated by the exotic orientation of these ancient routes. The word also serves as a metaphor for exchanging goods and ideas between diverse cultures. The sole reason for this name was only for the silk trade through the route from China to the Mediterranean countries. These ancient routes were formerly known as the "Royal Road" and at some period were called the roads "East to West", and now the "Silk Road". Although the trade route is commonly known as the Silk Road, some historians favour the term Silk Routes because it reflects the many paths taken by traders better.

A Brief History of the Silk Road 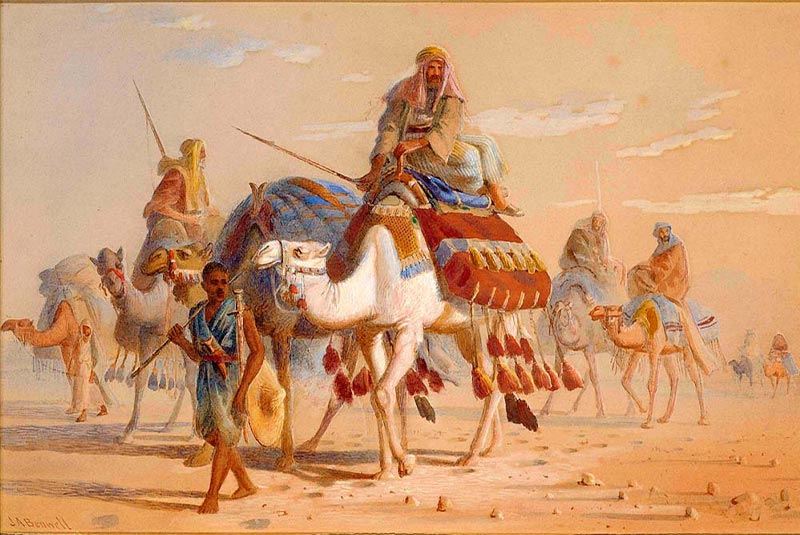 The road was built by Zhang Qian, a Chinese diplomat who served as an imperial ambassador to the world outside China in the late 2nd century B.C. during the Han dynasty. The Silk road was completed and expanded during the Han Dynasty. China experienced significant economic growth and development after the collapse of the Han kingdom and the taking over of power by the Tang Dynasty. As a result, the silk trade increased.

Iran, or Great Persia at the time, was a significant factor in the trading route. It was located between the West and the East of the world, and some historians believe that some parts of the silk road were based on the Royal Road, which was constructed in the 4th century during the Achaemenid Era. In addition, Silk fabrics were also made in Iran, so Iranians would get the raw material from the East and sell the final product to merchants from the West.

The Silk Road also passed through some prehistoric Persian sites such as Tepe-Hesar of Damghan, Shahrood Chakmak Hill, the Tepe- Sarab of Kermanshah or Ali Spring (Cheshmeh Ali). The Sassanid Era was the thriving time of the silk road in Iran when this empire gained its main wealth by exchanging and trading on the Silk routes and receiving custom charges and taxes from traders. In addition, Persian traders of herbs, honey, carpets, textiles, and precious stones performed most of their trade through the silk road.

In fact, only quite a few traders voyage from the Mediterranean to China and return. Due to the length of the journey and the many hazards and dangers on the way. Many merchants would travel short distances to the next market in Iran, exchange goods, and return. That is why Iran's location was influential on the trade routes.

The End of Trade On The Silk Road 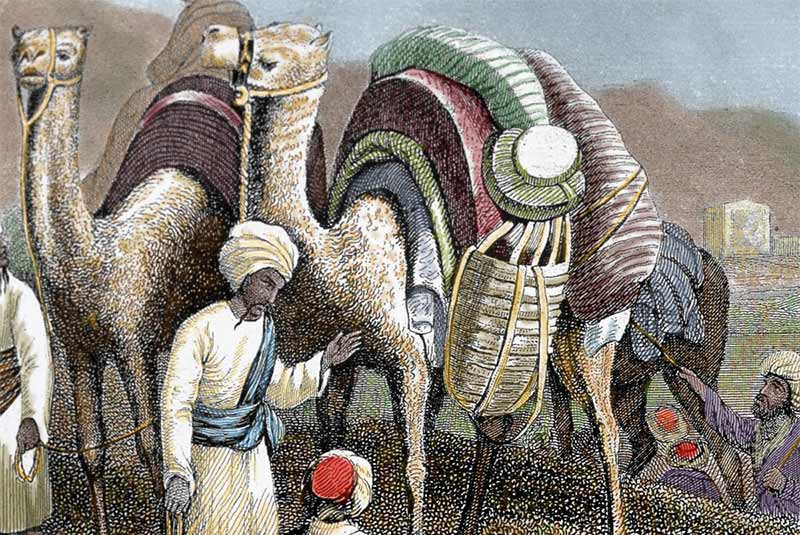 From 130 BC to 1453 AD, trade on the Silk Road was widespread and considered the world's most essential and main trade route. However, business on the Silk Road gradually faded with the advancement of western countries in production, technology, industry, and significant transformations such as political developments in different countries. Finally, the Silk Road trade ended due to the Ming Dynasty's order to stop dealing on the Silk Road and reduce the demand for silk in Europe at the end of the 14th century A.D.

What Was Traded On The Silk Road?

The silk road traders are not only trading silk. They also trade a wide range of goods. Merchants from China exported goods such as tea, silk, precious stones, gold, bronze, gems, paper, porcelain vessels, medicine, spices, perfumes, ivory, rice, and gunpowder. On the other hand, goods from the West such as grapes, gold and silver, domesticated and exotic animals, weapons and armour, glassware, fur, carpets, blankets, horse saddle, curtains, and animals such as dogs and horses were entering the country as exchange.

How Were The Merchants Travelling? 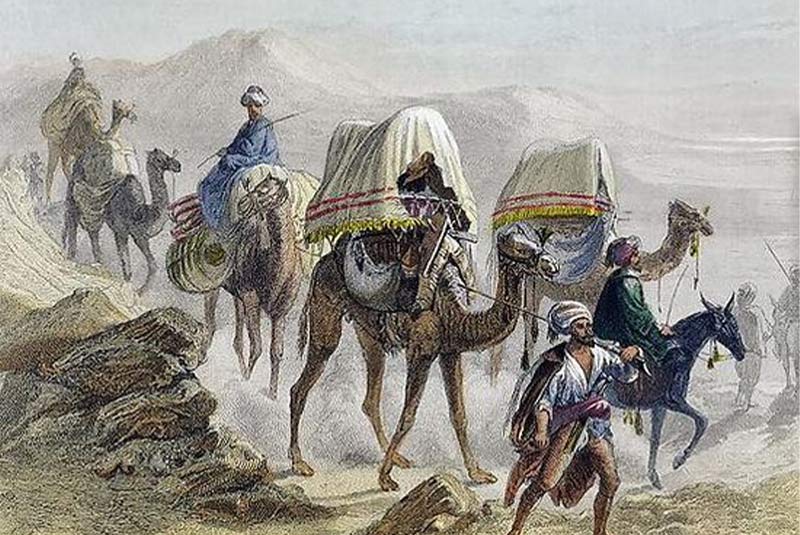 Most people think the Silk Road was only through the land and would imagine camel and horse in the endless day and night rides. While major routes were inland, there were also essential sea lanes. Great Persia was still playing a significant role. Skilful sailors were travelling between India, China and the Persian Gulf, so they offloaded some goods at the ancient port of Siraf. From Siraf, the goods were distributed to different destinations, towards important capitals and trading cities such as Babylon, Persepolis, Susa, Bukhara and Merv. 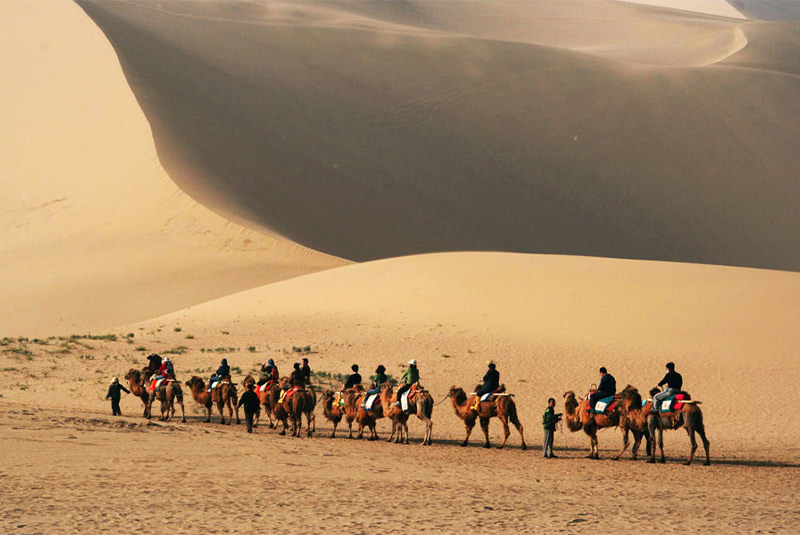 The Royal Road was essential in making the Persian Empire a beacon of peace, stability and multiculturalism in the ancient world. The Royal Road connected Susa (in present-day Iran) to Sardis (now in modern Turkey). It was established during the Achaemenid empire by the Persian ruler Darius I —some 300 years before the opening of the Silk Road. He was the fourth king of the Achaemenid dynasty and held many important construction projects during his time.

One noteworthy thing about the Royal Road is its importance in ancient Persia. Historians believe that the royal road was the basis of the silk road. The Royal Road was built from the west side of Turkey to the southwest of Iran to have rapid access to the most distant end of the empire. The Persians also expanded the route to include more minor routes that connected Mesopotamia to the Indian subcontinent and northern Africa via Egypt.

Tokens of The Silk Road in Iran 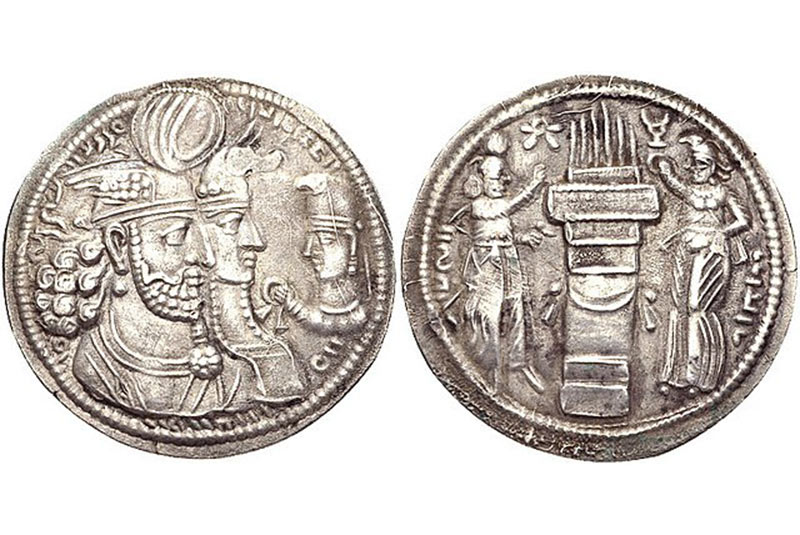 The merchants, voyagers, and caravans travelling on the Silk Road needed places to rest and recover during the nights. The Persian kings, especially Shah Abbas I, built caravanserais along the Silk routes to accommodate the merchants passing through Iran. A caravanserai is a roadside inn and is one of the main elements of Iranian architecture. Many of the caravanserais constructed on the Silk Road route are still available, and some are still in use! Bazaars are other significant mementoes of the Silk Road in Iran and the caravanserais. Bazaars were historical markets that were hubs for merchants to trade merchandise and exchange goods. The historic bazaars of Iran are located in the cities through which the main roads used to pass, like Kerman, Tabriz, Yazd, and Isfahan.

The Silk Road As a Vehicle of Globalization 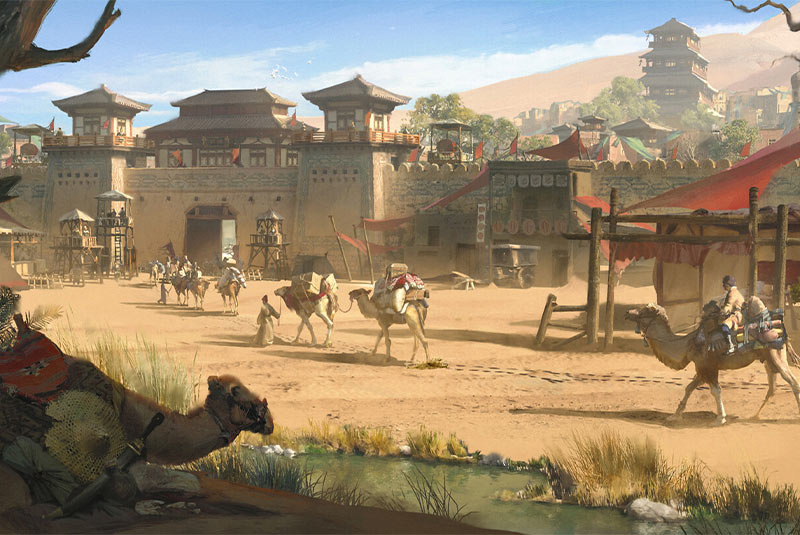 It is hard to overstate the significance of the Silk Road in history. The Silk Road was a very effective conduit for transferring ideas, goods, knowledge and culture across the vast expanses of Eurasia. Ideas spread through the Silk routes just as fluidly as goods. Religions such as Buddhism, Zoroastrianism, Christianity and Islam used the silk trading routes to spread the word. Villages along the silk route grew into multicultural cities. The exchange of information became easy and quickly gave rise to innovations and technologies that would transform the world.

The silk road also served as a cultural exchange; for example, traditional dances, dresses and food were exchanged between regions. Conversely, the silk road also offered access to more dangerous "travellers". The ancient pandemics that ravaged the old generations, including the Plague of Justinian, spread through the Silk Road network. Also, some research suggests that the Black Death in the late 1340s C.E. also likely spread from Asia along the Silk Road. The Silk Road also acted as a conduit to move large armies and weapons quickly, and the gunpowder from China transformed the nature of war in Europe and beyond.