All Caravanserais on the Silk Road, the first Tourist Inns in the World

The term “caravanserai” refers to the tourist inns on the Silk Road which shelter men, goods, and animals. The word is a combination of the caravan (means a group of travelers) with sara (means home or place to stay).

The term “caravanserai” refers to the tourist inns on the Silk Road which shelter men, goods, and animals. The word is a combination of the caravan (means a group of travelers) with sara (means home or place to stay). There used to be an extensive network of caravanserais on the whole network of trade routes in the Middle East and Central Asia. The aim of constructing these inns was to support the flow of commerce, information, pilgrimage and people across the Silk Road. Caravanserais on the Silk Road were ideally positioned within a day’s journey from each other to prevent merchants from spending nights exposed to the dangers of the road. Usually, there was a caravanserai every 30 to 40 kilometers in well-maintained areas. According to the historical evidence, the first caravanserais in Iran were constructed when the Achaemenid Empire (circa 550-330 BC) ruled Persia. At the same time with the development of the road systems and the increase in the number of travelers and merchants during this time, these old roadside inns increased and flourished along the trade routes of the old Silk Road. Later in the 16th and 17th centuries, Shah Abbas I ordered to build a series of caravanserais across Persia during the much later Safavid Dynasty.

The Architecture of Caravanserais on the Silk Road

Most of the Caravanserais had a square or rectangular plan with a large wide portal and high walls. The only exception of this plan is the Zein-o-din Caravanserai in Mehriz which has a circular plan. The Caravanserai opens to a courtyard which opens to the sky with an architectural style that reflects the local method and the construction materials available in each geographical locality. Some of the commercial caravanserais within the cities were built as two-story buildings often located right next to the bazaars to facilitate the transfer of goods. Almost all the caravansaries, have an abanbar (water reservoir) in the middle of the courtyard or outside the building to provide water to the travelers. Moreover, there are usually baths, a mill, shops, a bakery, a butchery and a prayer room inside the caravanserais. Two examples of this type of caravanserai are Dayr-e Gachin Caravanserai in the south of Tehran and Mahyar Caravanserai on the Isfahan-Shiraz road. 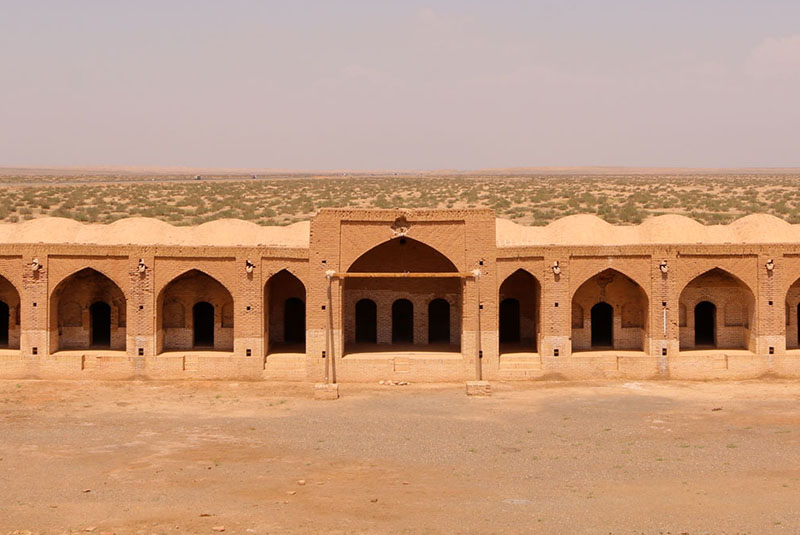 In many of the caravanserais built in the post-Safavid era, there was a fire-place where the travelers could light a fire. However, in the Safavid dynasty, caravanserais, like their contemporary religious structures, had architectural decorations such as brickwork, tile work, molding, and masonry. In the hot, desert regions, badgirs (wind-catchers) were built to cool and refresh the rooms. Badgirs were often built on the iwans, opposite the main portal, as at Zin-o din in Yazd and Jokar in the vicinity of Tabas. The remains of old caravanserais show that there would have been rooms for guards and officers to protect the travelers within. Guest rooms were built around the courtyard and the stables were located behind them with their doors in the corners of the yard. In the Safavid dynasty, the designs of caravanserais diversified and in addition to four-iwan (vaulted hall) caravanserais, other forms such as circular, octagonal and desert caravanserais were introduced.The main construction materials of caravanserais in Iran were brick, stone and sometimes adobe.

The most preserved Caravanserais in Iran

If you are planning to travel to Iran and have the interest to visit or even stay at one of the most historical tourist inns in the world, here is the list of the most preserved Caravanserais in Iran.

The best preserved urban caravanserais in Iran is Saad-al Saltaneh Caravanserai which is located at the heart of Qazvin City. The caravanserai was built during the Qajar era which is used as a local market with some of the most magnificent handicrafts shops. If you are planning to travel to Qazvin make sure to visit this magnificent place.

If you want to experience a stay like an old traveler in the heart of the desert, Zein-o-din Caravanserai is the place for you. This two-story caravanserai with 33 rooms is situated in the 60th kilometer of Yazd, near Mehriz Town. Zein-o-Din Caravanserai is the only circled caravansary in Iran. The renovation of this amazing place took about 3 years and only natural materials from the surrounding area were used to preserve its authenticity. 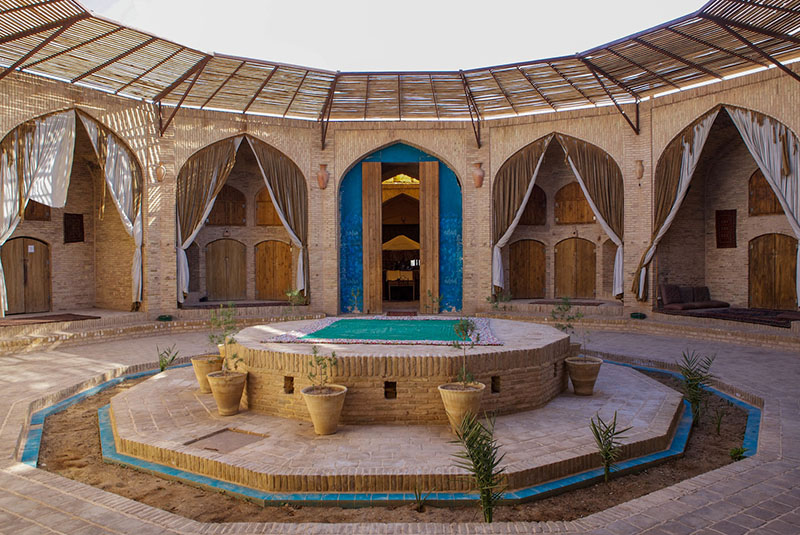 Mahyar Caravanserai is located in Mahyar village, 52 kilometers from the south of Isfahan on the Isfahan – Shiraz Road. It was built in the Safavid era but was destroyed by natural disasters. Later, it was rebuilt in the reign of Shah Soleiman Safavi and some parts was added to it. There are thirty rooms at Mahyar Caravanserai with the same size of 5*4 meters all around the courtyard. Each room has a separate porch. There are also four stables across the four corners of the caravanserai.• Abbas Abad Caravanserai (Shahrood)The Abbas Abad Caravanserai is situated in the village of Abbas Abad, Shahrood. There are four porches (iwans), 32 chambers or rooms overlooking the courtyard and two large halting areas. There is also a dock in the middle of the yard for buying, selling, and loading of goods.

Qasr-e Bahram Caravanserai is in the Kavir National Park, on the slopes of Siah Kouh Mount, in 154 kilometers south of Tehran. It was built during the Safavid Dynasty, and it is believed that the caravanserai was used by Safavid kings during the hunting season. The eye-catching exterior of the caravanserai is covered with light cream stones. Qasr-e Bahram Caravanserai has a unique water supply network that operates with the help of two canals, one built above the other. The lower canal is made of clay and the upper one carved out of white stone. They carried water from a spring 7 kilometers away to the pool in the middle of the main courtyard. 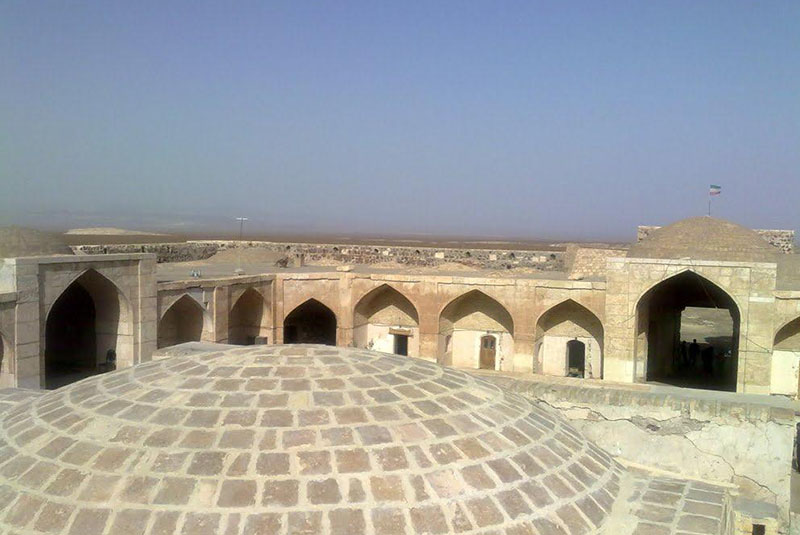 Deir-e Gachin Caravanserai is located in the center of Kavir National Park, 80 kilometers north-east of Qom and 35 kilometers south-west of Varamin. The Seljuk structure of the caravanserai includes four circular towers at the corners and two half-oval towers at both sides of the main gate. There are also 44 rooms or chambers, 4 big halls (stables), mosque, private shabestan, fodder barn, gristmill, bathroom, and toilet. The word ‘deir’ in Pahlavi language means dome, and gach means plaster. The Caravanserai was called Deir-e Gachin due to the plaster dome which was used as the prayer room. Unfortunately, there is no such dome at the place.

The Dodehak Caravanserai is located on the eastern banks of the Qomrood River. It was built in the Safavid era with towers on each of its eastern, northern and western ramparts. The entrance gateway is a porch with stairs leading to the courtyard. At the right side of the porch, there are two chambers. The first one is square which was used as an area for prayers. The foundation of the caravanserai was stone, whereas the facade was of brick. Parts of the caravanserai were ruined but renovated in the last few years.• Maranjab Caravanserai (Aran o Bidgol)If you are looking for a quiet place in the middle of the desert with beautiful sandy hills, Maranjab Caravanserai is the place. It was built in 1603 AH by the order of Shah Abbas I, king of the Safavid Dynasty. The caravanserai is located in the north of Aran o Bidgol County. The monument covers an area of 3500 square meters with a square shape. It was built with stone and brick, and its fortified exterior walls have 6 watch towers. There are 29 rooms and chambers all around the central courtyard. In addition, there is a big hall behind the chambers that merchants used to keep their horses there. 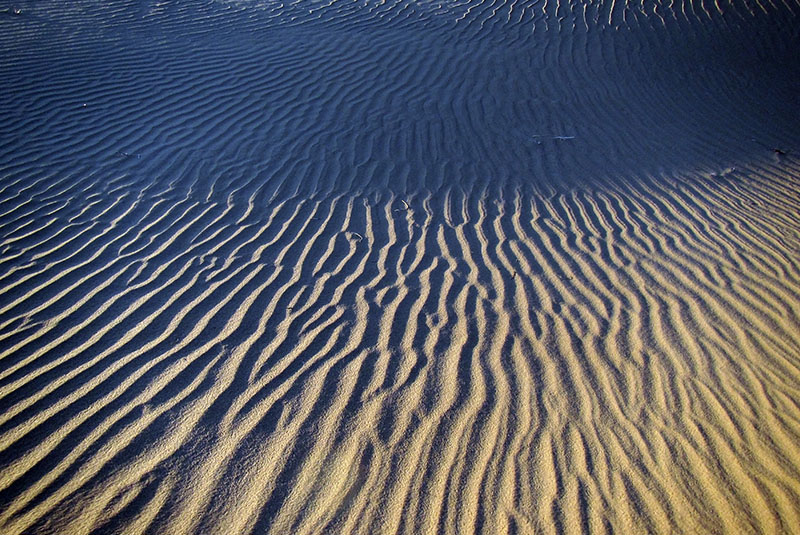 Miandasht Caravanserai complex is situated in the middle of the Dashte Kavir, in 105 kilometers east to the city of Shahrood, on the main road between Tehran and Mashhad. The caravanserai includes three traditional water stores, one place for hours hosting, and one castle, which in total covers an area of 15000 square meters. The main building of the caravanserai has been renovated to be used as a tourist complex and tourist inns with about 15 rooms.

Moshir-ol-Molk Caravanserai or the Borazjan Fortress was built in Qajar era in 1872. It was built to be used by a Qajar politician named Mirza Abolhassan Khan Moshir-ol-Molk. There is a huge wooden door in the west wing of the caravanserai which opens to its main courtyard. On the second floor of the west wing, there is a Shahneshin (spacious living room area) with a terrace facing the street. 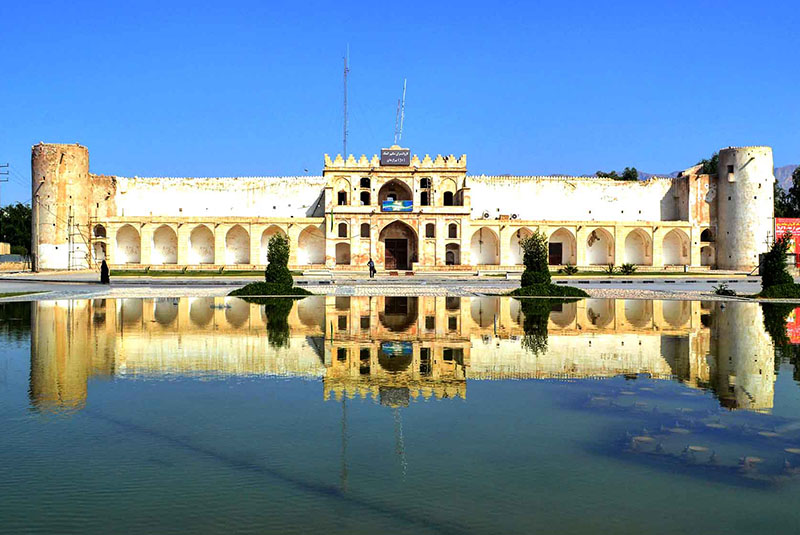 Stairways on both sides of this Shahneshin connect the roof of the structure to the Andarouni area used by women and children. The caravanserai has four towers and covers an area of 7,000 square meters. There are 68 rooms and chambers in which travelers could stop and rest until 1922 when it was still used as a caravanserai. From 1922 to 1957, the building used to house military personnel. In 1957, it turned to a prison and used for this purpose till 1999. Today, local authorities have been trying to change it to an Anthropology Museum. Moshir-ol-Molk Caravanserai was registered as a National Heritage site in 1984.

The brick building caravanserai was built during the Qajar era. This monument is located on the Tehran route to Qom. The characteristic of the caravanserai is that its interior, instead of being ahead of the surrounding walls, is retreated and decorated with log cabinets and short columns above the walls. There is also a backyard in the courtyard instead of the main porch, and behind it, the reception hall is built. The only entrance to the caravanserai is in front of the main courtyard. From there you can enter the main gate of the Caravanserai. There are arch doors all around the caravanserai to be used by horse riders. 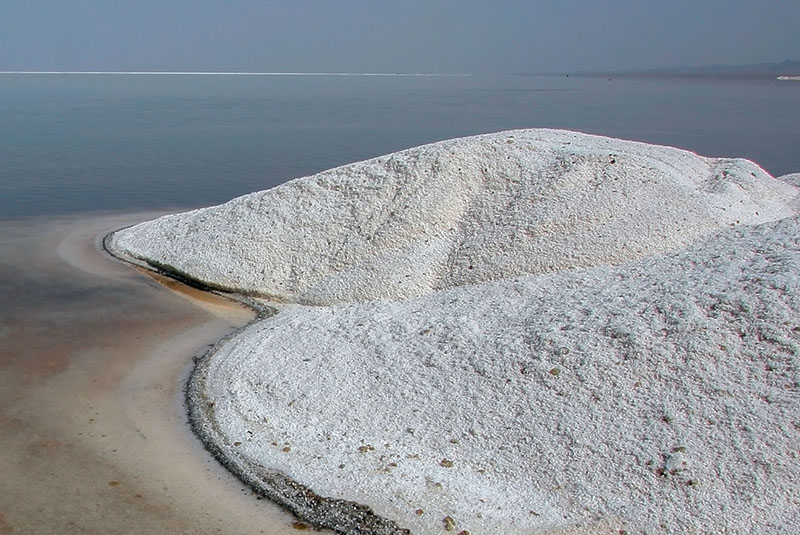 The Robat Karim Caravanserai was built during the Qajar era, in the route of Tehran-Saveh. It has a two iwans (porches) style that the entrance is from the western porch. There are two inscriptions that date of “1240 AH” with sponsor name “Agha Kamal” is carved on one of them.