Iranian are known for being great artists. When you travel to Iran, in every corner of the country you can find a unique type of handicraft and artwork. Among all of them, one which goes back to at least a thousand years ago is the Persian Miniature.

It is actually a richly detailed miniature painting which depicts religious or mythological themes. This breathtaking art flourished from the 13th through the 16th centuries in Iran. Still, several contemporary artists use this method to create notable Persian Miniatures. These delicate, lush paintings are visually stunning, with a level of detail which can only be achieved with a very fine hand and an extremely small brush. 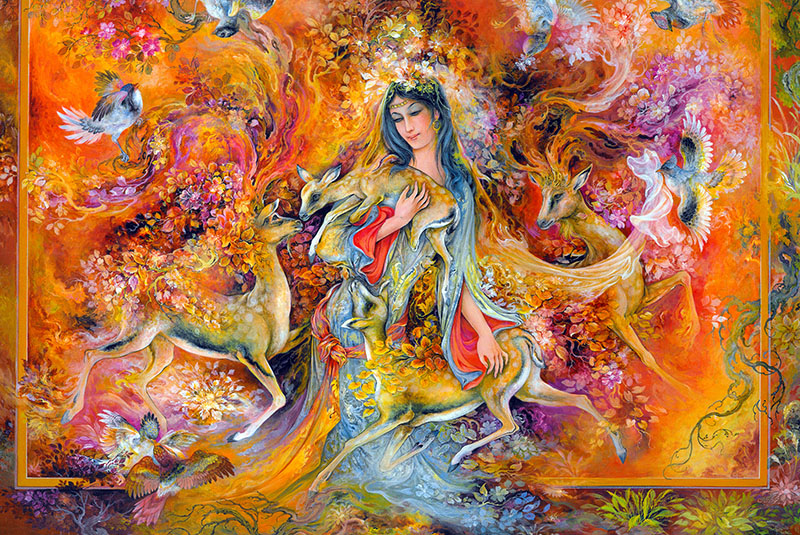 Important Features of the Persian Miniatures

Several features about Persian miniatures stand out. The first is the size and level of detail; many of these paintings are quite small, but they feature-rich, complex scenes which can occupy a viewer for hours. Classically, a Persian miniature also features accents in gold and silver leaf, along with a very vivid array of colors. The perspective in a Persian miniature also tends to be very intriguing, with elements overlaid on each other in ways which sometimes feel awkward to people who are accustomed to the look and feel of Western art.

The history of Persian Miniature

The first miniature paintings in Iran dates back to the beginning of the Islamic period; between the 7th and 10th century, influenced by the Sassanid, Manain and Byzantine art that are called the Baqdad or Abbasi school. Of course, the influences of the Middle Asian themes and meanings were observable although biased Caliphs had prohibited human figures to be painted.

Seljuk paintings are indicative of some unified style and perception. The pictorial presentation was so strong then that started to extend beyond the geographical borders to the other nations under Seljuks’ domination. This style had two major characteristics by round full faces and a completely contoured style in representing bodies, plants, animals and natural landscapes.

According to the historical evidence and paintings from that time, it is believed that Iranian start doing miniature from the Ilkhanid period and the main center of doing the art was the current city of Tabriz. At that time artists introduced new motifs, including Chinese-influenced features such as dragons, lotuses, and peonies. Among the most famous Ilkhanid artists was Ahmad Musa, described by the 16th-century painter Dust Muhammad as the man who ‘unveiled the face of painting’.

An example of the most ancient Iranian miniature is the drawings of a book called “Manafe-alHayvan” (1299 AD). This book describes the characteristics of animals. The natural history is mixed and narrated through the ancient fables in this book.

Under the governor of Jalayirid Kingdom, the dramatic Ilkhanid style of painting was replaced by a more tranquil vision. The paintings that have survived from this period tend to depict subjects popular in contemporary poetry, such as battle scenes and heroic accomplishments. One of the most celebrated Jalayirid artists was Junayd, a pupil of Shams al-Din (who had himself been a pupil of Ahmad Musa).

Timurid rulers were great supporters of all different types of art and as a result, many artists have been attracted to their region. Due to their passion for art, the eastern Islamic world became a significant cultural hub. One of the most famous Persian artists from this period was Kamal al-Din Bihzad. Bihzad transformed the more rigid, academic painting style common in the early years of the Timurid dynasty, injecting more life and individuality. His treatment of rocks, trees, and vegetation more naturally rendered than those of his predecessors. 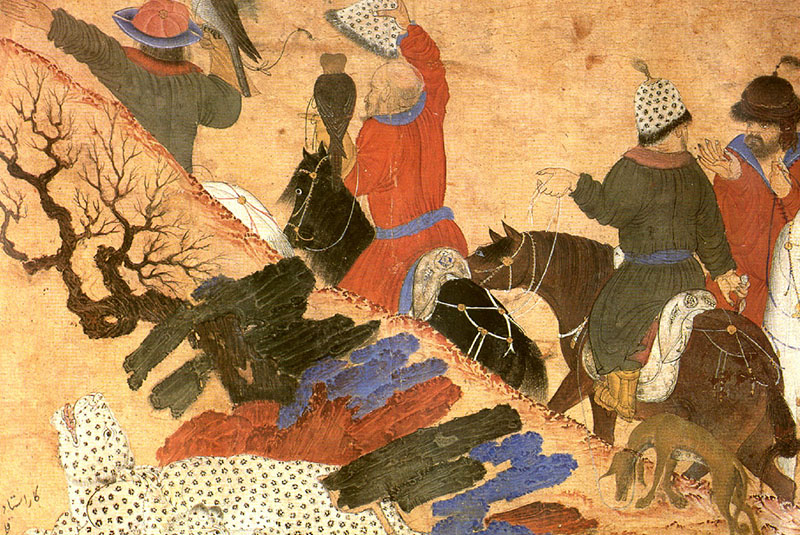 Bihzad's most famous works include "The Seduction of Yusuf" from Sa'di's Bustan of 1488, and paintings from the British Library's Nizami manuscript of 1494-95 - particularly scenes from Layla and Majnun and the Haft Paykar. The attribution of specific paintings to Bihzad himself is often problematic, but the majority of works commonly attributed to him date from 1488 to 1495.

During the Safavid Dynasty, many magnificent illustrated manuscripts continued to be produced in a unique style. This style is characterized by a tendency to divide the illumination into geometrically defined sections, with complex architectural forms painted in bright colors. During this period lines become more calligraphic, human figures fill out, and artists favor a palette of browns, purples, and yellows. 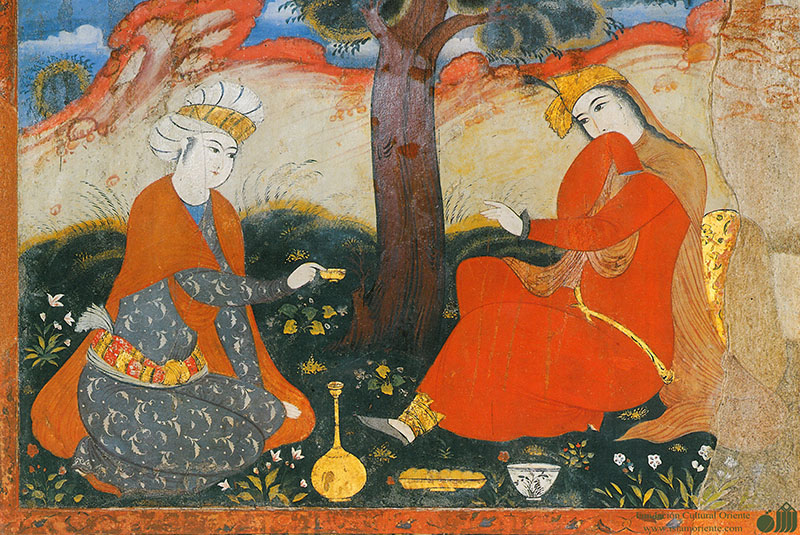 Among the most celebrated artists of this time was Reza Abbasi (c. 1565-1635). He founded the “Safavid School of painting” and he is considered to be one of the foremost Persian artists of all time. He received his training in the atelier of his father, Ali Asghar, and was received into the workshop of Shah Abbas I at a young age. Thanks to his influence, semi-nude women, relaxed youths and lovers came to replace the heroes of Persian epics in the repertoire of many artists. Today his works can be found in the museum that bears his name in Tehran, as well as in many of the major museums of the West, such as the Smithsonian, the Louvre and the Metropolitan Museum of Art.

As a result of increased communication between Iran and Europe in the mid-17th, European conventions of modeling and perspective began to appear in Persian art. Muhammad Zaman imported European styles into Persian court painting, which quickly became standard practice. Although this gave Safavid art a new look on the surface, the substance remained entirely Persian.

Persian painting from the 18th century until now

The rise of the Qajar dynasty (1779-1924) signaled a new era of peace, and Qajar shahs relied heavily on the visual arts to solidify their position and promote their reputation. Paintings of the Qajar era, are a combination of the classic European arts and Safavid miniature techniques. In this period, Mohammad Gaffari Kamal-ul-Molk pushed forward the European classical style of painting in Iran. Under the Qajar, a kind of painting known as the “Teahouse” painting found its place. This kind of painting is a new phenomenon in the history of Iranian art. 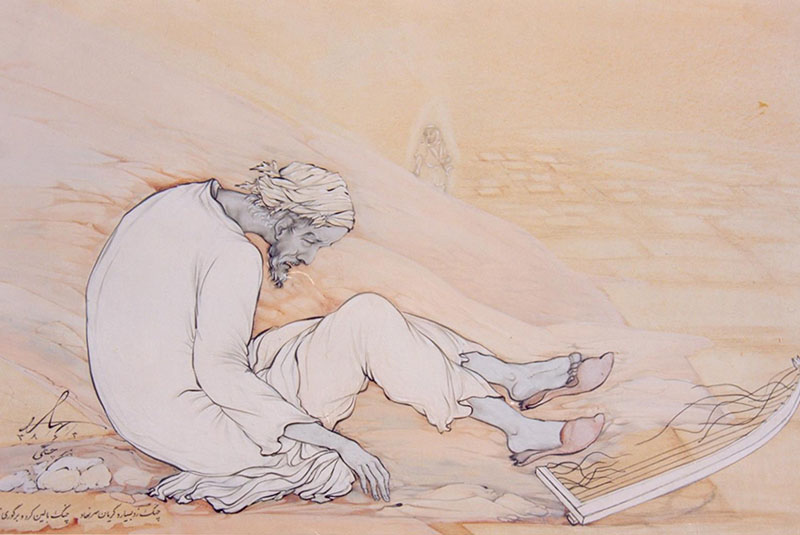 The great Iranian master miniaturist, Hossein Behzad the son of pen-holder designer, Mirza Lotfollah Esfahani was born in Tehran in 1894. At first, Behzad followed the style of old masters like Kamaleddin Behzad and Reza Abbassi. His works were so skillfully that one could not tell the difference between his works and the old masters'.

Mahmoud Farshchian (born 1930) is a world-renowned master of Persian painting and miniatures. He was born in the city of Isfahan in Iran, a place famed for its art and artists, and it was here where he started to learn art, painting, and sculpting. "The Museum of Master Mahmoud Farshchian", is a museum devoted to the works of the master, which has been set up by the Cultural Heritage Foundation in the Sa'dabad Cultural Complex in Tehran, inaugurated in 2001.

If you have a plan to travel to Tehran and have an interest in seeing a great collection by Master Farshchian, you can go to the Sa’dabad Cultural Complex in Tehran and enjoy your time.