The Silk Road was built to accelerate the connection between the East from China to the West in European countries. It was actually the most historical and biggest trade network until the 15th century AD for almost 1700 years.

The term “Silk Routes” has been used increasingly by the historians as the Silk Road was not a single road and there were a number of roads that connect to each other and form the Silk Road. It is believed that the Great Oasis cities of Central Asia played a crucial role in the effective functioning of the Silk Road trade. Here, we are going to briefly talk about the facts, history and different routes of the Silk Road.

Facts about the Silk Road

The most important item which was trade in the Silk Road was “silk” and therefore it is believed that the name of the road derives from it. However, it was in 1877 that the term “Silk Road” was used for the first time by a German geographer and historian Ferdinand von Richthofen.

The increase of trade through this road led to huge development in many countries such as Korea, Japan, China, and the Indian subcontinent, Iran/Persia, Europe, the Horn of Africa, and Saudi Arabia. In addition, the network was used to be the center of cultural interaction between all these nations. Commodities such as paper and gunpowder, both invented by the Chinese during the Han Dynasty, had obvious and lasting impacts on culture and history in the West. They were also among the most-traded items between the East and West.

The most popular trade item in the Silk Road was Chinese silk which was not the only material of trades between these networks.

From West to East traded goods included Horses, Saddles and Riding Tack, The grapevine and grapes, Dogs and other animals, Animal furs and skins, Honey, Fruits, Glassware, Woolen blankets, rugs, carpets, Textiles (such as curtains), Gold and Silver, Camels, Slaves and Weapons and armor. The origins of gunpowder are less well known, although there are references to fireworks and firearms in China as early as the 600s. Historians believe that gunpowder was indeed exported along the Silk Road routes to Europe, where it was further refined for use in cannons in England, France and elsewhere in the 1300s.

Archeological sites such as the Berel burial ground in Kazakhstan confirmed that the nomadic Arimaspians were not only breeding horses for trade but also great craftsmen able to propagate exquisite art pieces along the Silk Road.

The History of the Silk Road

The Silk Road was officially established in China during the Han Dynasty which ruled China from 206 B.C. to 220 A.D., however, transportation of goods and services along these routes dates back even further.

Persian ruler Darius I, the king of Achaemenid Empire ordered to build the Royal Road to connected Susa (in present-day Iran) to Sardis (near the Mediterranean Sea in modern Turkey) with more than 1,600 miles about 300 years before the official opening of the Silk Road. Later, the Persians also expanded the Royal Road with smaller routes to connect Mesopotamia to the Indian subcontinent and also northern Africa via Egypt. 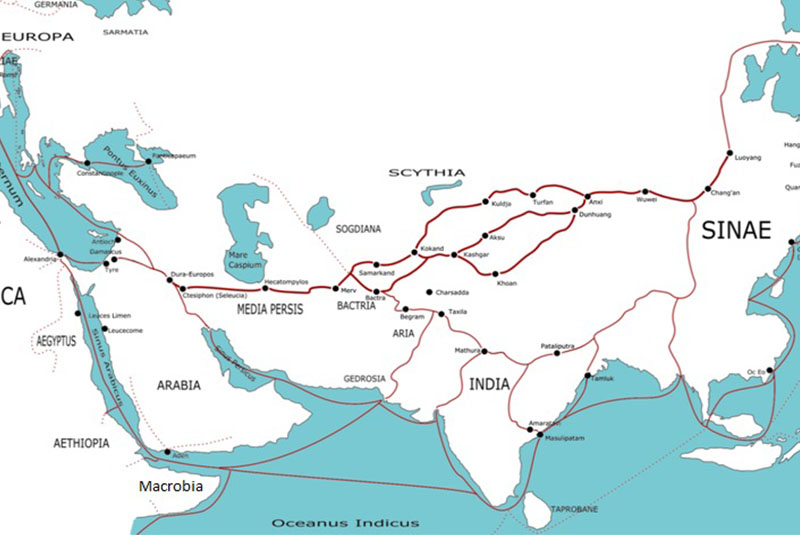 The next major step toward the development of the Silk Road was the expansion of the Greek empire of Alexander the Great into Central Asia. In 329 BCE, at the mouth of the Fergana Valley in Tajikistan, he founded the city of Alexandria Eschate or "Alexandria the Furthest". The Greeks remained in Central Asia for the next three centuries.

In 30 BCE, the Roman conquest of Egypt, regular communications and trade between China, Southeast Asia, India, the Middle East, Africa, and Europe blossomed on an unprecedented scale. The Roman Empire inherited eastern trade routes that were part of the Silk Road from the earlier Hellenistic powers and the Arabs.

Byzantine Greek historian Procopius stated that two Nestorian Christian monks eventually uncovered the way silk was made. From this revelation, monks were sent by the Byzantine Emperor Justinian (ruled 527–565) as spies on the Silk Road from Constantinople to China and back to steal the silkworm eggs, resulting in silk production in the Mediterranean, particularly in Thrace in northern Greece.

Although the Silk Road was initially formulated during the reign of Emperor Wu of Han (141–87 BCE), it was reopened by the Tang Empire in 639 when Hou Junji conquered the Western Regions and remained open for almost four decades. 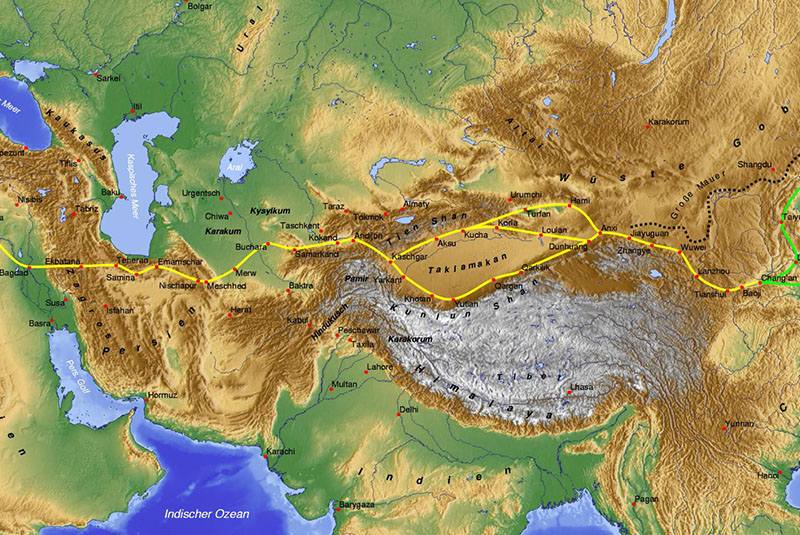 The Silk Road reached its peak in the west during the time of the Byzantine Empire; in the Nile-Oxus section, from the Sassanid Empire period to the Il-Khanate period; and in the Sinitic zone from the Three Kingdoms period to the Yuan dynasty period. Trade between East and West also developed across the Indian Ocean, between Alexandria in Egypt and Guangzhou in China. Persian Sassanid coins emerged as a means of currency, just as valuable as silk yarn and textiles.

The fragmentation of the Mongol Empire loosened the political, cultural, and economic unity of the Silk Road. In addition, with the gradual loss of Roman territory in Asia and the rise of Arabian power in the Levant, the Silk Road became increasingly unsafe and untraveled. In the 13th and 14th centuries, the route was revived under the Mongols.

In the nineteenth century, a new type of traveler ventured onto the Silk Roads: archaeologists and geographers, enthusiastic explorers looking for adventure. Coming from France, England, Germany, Russia, and Japan, these researchers tried to explore ancient sites along the Silk Road, leading to many archaeological discoveries, numerous academic studies, and most of all, a renewed interest in the history of these routes.

Today, the only part of the Silk Road still exists, is in the form of a paved highway connecting Pakistan and the Uygur Autonomous Region of Xinjiang, China.

Different Connections and Routes of the Silk Road

The Silk Road consisted of several routes. Among the overland routes, the dominating ones where the Northern route, the Southern route, and the Southwestern route.

The Northern Route starts at Chang’an, an important city in central China. This route became popular around the first century BC, when the Chinese Emperor Wu of Han, who reigned from 141 to 87 BC, used his army to keep nomadic tribes from attacking travelers within his sphere of influence. From Chang’ a northern route went northwest through the Chinese provinces Shaanxi and Gansu, before splitting into three different routes to the mountain ranges of the north of the Taklamakan Desert, to the mountain ranges south of the Taklamakan Desert, and to the Tian Shan Mountains through Turpan, Talgar, and Almaty.

One branch of the northern route turned off to the northwest instead of continuing westwards. This one passed the Aral Sea and went north of the Caspian Sea, before reaching the Black Sea.

The Southern Route went from China through the Karakoram Mountains. Because of this, it was also known as the Karakoram route. The Karakoram mountain range spans the borders of Pakistan, India, and China, and also extends into Afghanistan and Tajikistan in the northwest.

West of the Karakoram Mountains, the southern route had many spurs heading south to the sea, since many travelers wished to continue by ship instead of going overland.

From Merv, the southern route went westward in almost a straight line, through northern Iran, Mesopotamia and the northern outskirts of the Syrian Desert, to reach the Levant where ships were waiting to take the precious cargo across the Mediterranean to southern Europe. Continued travel over land was also possible from the Levant, either north through Anatolia or south to North Africa.

There was also a branch of the Silk Road that went from Herat in Afghanistan to the ancient port town of Charax Spasinu by the Persian Gulf, passing through Susa on the way. From Charax Spasinu, the journey continued by ship to various Mediterranean ports, such as Petra.

The Southwestern Route went from China to India, through the Ganges Delta. This delta region was an important trading hub, and archeological excavations have found an astonishing array of goods from various parts of the world here, such as ancient Roman beads and gemstones from Thailand and Java.

The Ledo route going from Sichuan in modern-day China through Yunnan, Burma, and Bangladesh. Even though the ancient Greco-Roman geographer Claudius Ptolemy (circa 100-170 AD) never traveled this Far East, he must have been able to obtain information about the region through other travelers, because he produced a map where the Ganges Delta is depicted with a remarkable degree of accuracy. The map shows that whoever informed Ptolemy knew about things such as the course of the Brahmaputra River.

Maritime routes involved waters routes between The Yellow Sea, The East China Sea, The South China Sea, The Strait of Malacca, The Indian Ocean, The Gulf of Bengal, The Arabian Sea, The Persian Gulf, The Red Sea, and The Mediterranean.