Iranian Caviar: All you need to know about the black pearl

There are a few popular items on the list of exports from Iran, including oil, carpets, pistachios, and caviar. Iranian caviar has a fantastic reputation all around the world, with the finest sturgeon coming from the waters of the Caspian Sea. In addition, since 2015, dozens of Iranian producers are raising sturgeon on fish farms.

Price of one-ounce caviar can vary from 70 to 150 $, depending on the quality. As a result, the high price tag on caviar makes it a luxury purchase. In fact, it’s almost never used in Persian cuisine and hard to find in restaurants.

For those who have a taste for it, it can easily be purchased as a duty-free item at Tehran’s Imam Khomeini International Airport, in five-star hotels, or in some fish markets.

Here, we are going to talk about history, factors that influence the quality, and different types of Caviar in Iran. 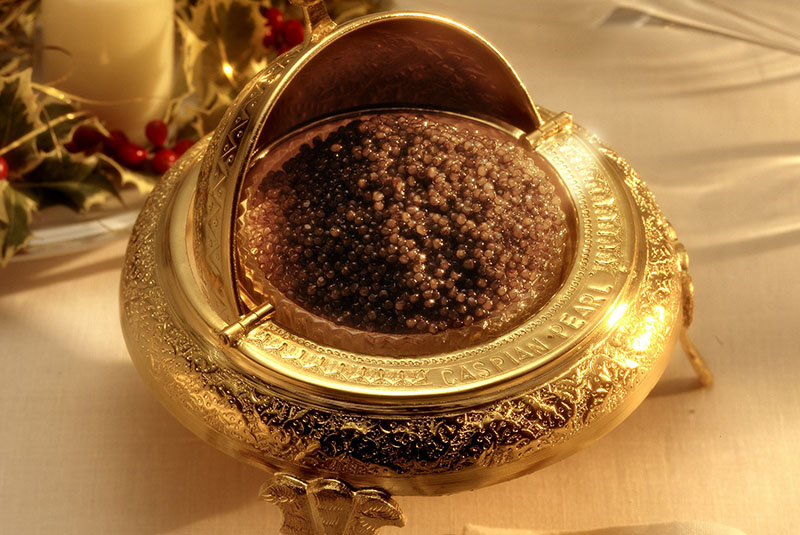 For many, Iranian caviar is associated with the era before the 1979 Islamic Revolution, when a Western-friendly monarchy ruled the country and European tastes were in vogue.

It is believed that the first people tasting roes were the Azeri and Persian who used to live at the Kura River in the area of the former Persian Empire, which is known as Azerbaijan today. They called Caviar, Chav – Jar, which literally means “cake of power”.

The Persians believed that caviar was medicine, which can cure many diseases, and also a source of energy. Aristotle, the Greek scholar in the 4th century B.C., described caviar as a delicacy made from the roe (eggs) of sturgeon fish.

During the Roman Empire, caviar was such a luxury so that it was presented among garlands of flowers, and trumpets heralded its arrival to the table. The main consumers of caviar in old Russia were the czars. Every year Czar Nicholas II received 11 tons of the best caviar as an annual tax from the fishermen of Astrakhan and Azerbaijan.

In France, laws state that only processed roe of sturgeon can be called caviar. In the US, however, various kinds of fish roe can be sold as caviar as long as the fish type must be indicated on the label.

The major sturgeon species used to produce true caviar today are Beluga, Osetra, and Sevruga. Sturgeon, which is nearly extinct, was the source of the prized "golden caviar of the Czars" which got its name from its golden color. 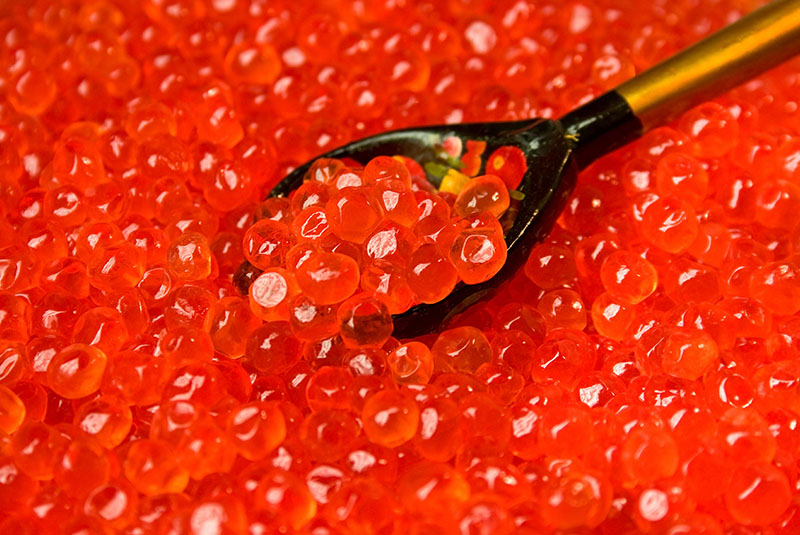 Today, Iranian caviar comes from the northern Gilan, Mazandaran, and Golestan provinces bordering the Caspian Sea. Along with other species of sturgeon, the bottom-dwelling beluga sturgeon thrive especially well in these icy brackish waters, which give the caviar a unique taste. With some amazing survival instincts, beluga has a lifespan of up to 100 years, reaching maturity at around 20 years.

There are a number of factors that influence the quality of Caviar. Caviar is graded by color and size, with the lightest and largest being the best and therefore the most expansive. The sturgeon eggs are graded for color, with 000 indicating the lightest colored and 0 the darkest.

The US and other countries also produce caviar from the roe of salmon, paddlefish, whitefish, and lumpfish. Each type has different standards and price is much lower than true caviar.

There are a number of types of Caviar in Iran, in the following we are going to introduce the most popular ones:

Iranian Beluga Caviar which is known as Almas/Black Gold Caviar is the world’s most expensive Caviar and is retrieved from the Persian Beluga. “Almas” literally means “Diamond” in Farsi. 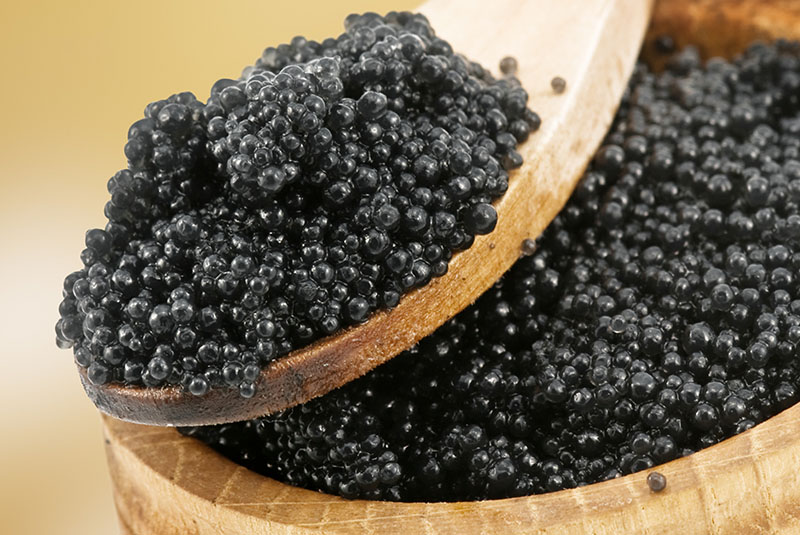 The “Almas” is procured from the eggs of a very rare albino sturgeon of very old age (possibly 70-100 years). This rare specimen has taken residence at the southern regions of the Caspian Sea, and the reason behind that is the lack of pollution in those waters.

Elephant Fish Caviar is from Belugas species which are the largest members of the sturgeon family. Due to its size, the eggs of this fish are similarly big and thus are called “Elephant-fish”.

The color of these Caviar extends from a deep color of steel to a light grey-white color. The lightest color is the most desirable one there is.

Iranian Karaburun Caviar is the name of a specific sturgeon native to the southern region of the Caspian Sea. This kind of sturgeon is one of the only wild sturgeon species left in the world that does not face the dangers of extinction.

We owe this to the Iranian Ministry of Fisheries and their tireless efforts in the process of saving this fish. This special sort of Caviar tastes like a fusion of salty and buttered flavors.

Iranian Osetra Caviar thought of as one of the world’s most tasteful and perfect Caviars, the Ossetra/Asetra is mostly collected in Iran. This Caviar is very nutty and creamy in taste, and its color has a variety ranging from black to medium and light gold. 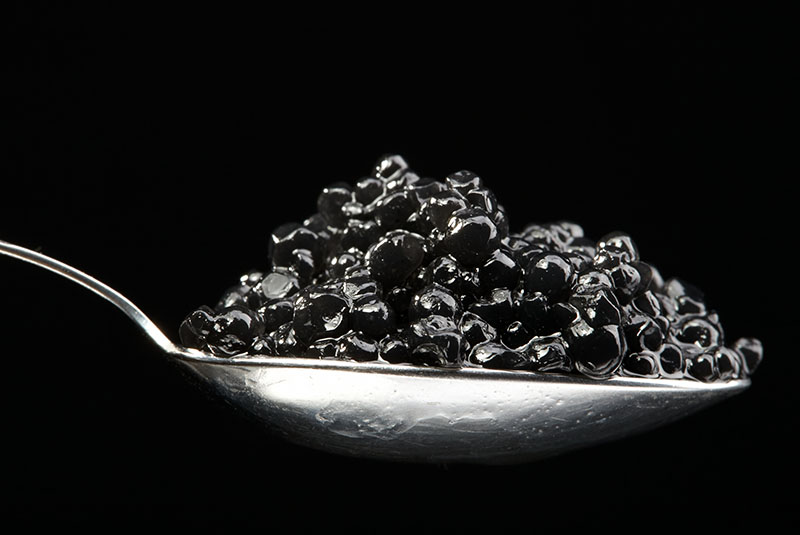 A few years after the first decade, this fish reaches full maturity and its lifespan can reach near 80 years. Professionals have stated that the taste of its eggs differ due to what the fish feeds on.

Iranian Sevruga Caviar has a very quick reproduction cycle, so it develops more eggs in comparison to the other ones. This fish matures by its 7th year and is the smallest of the sturgeon family in the Caspian Sea. The price is this Caviar is comparatively cheaper.