Vank Cathedral; one of the oldest Christian Cathedral in Iran

Being an Islamic country, there are a number of mosques and holy shrines in every corner of Iran. However, for centuries, people from other religions have been living in the country, and as a result, it is easy to find religious places of other religion.

One of the most visited attractions in Isfahan is the Vank Cathedral; one of the oldest Christian Cathedral in Iran. It is also known as the Sacred Savior Cathedral, or the Saintly Sisters Church, which is located in Jolfa District in Isfahan. In the Armenian language, it is called Vank Cathedral which literally means convent or monastery. The monument is the most important architectural and artistic treasure of the Armenian Christians in Isfahan.

Here, we are going to briefly introduce the magnificent Vank Cathedral from different aspects, such as the history, the architecture, the collection, and also the beautiful interior paintings in the cathedral.

During 1603-1605 following the Ottoman War, Armenians began to migrate to Iran to start a new life under the Safavid King, Shah Abbas the first. They were settled in the northern part of Iran, at the Aras River, in Nakhchivan district. However, in 1604, Shah Abbas decided to force all the people living in Nakhchivan to leave their homes and move to Iran, since he realized that the district might fall into Ottoman Hands. At that time, the Armenian refugees settled in southern part of Isfahan, which later named New Jolfa District, which was named after their original homeland in today’s Azerbaijan Republic. 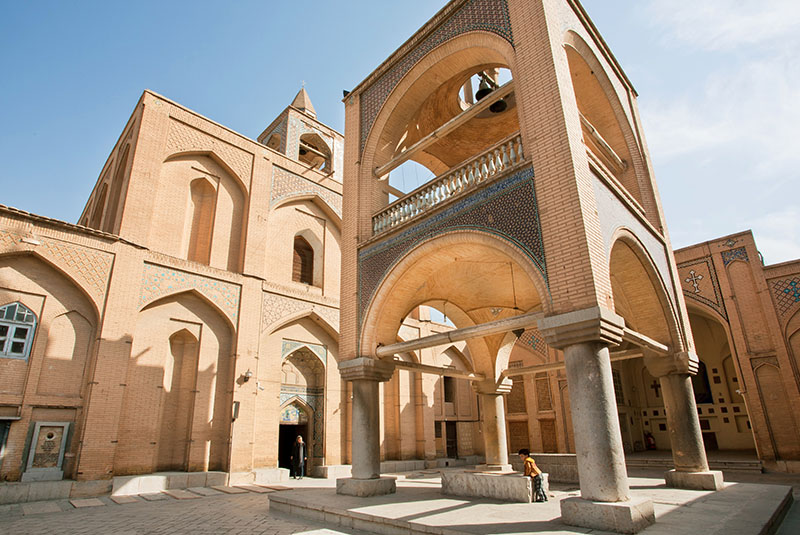 The Armenian started building a number of churches and monasteries in the district. It is said that the first monastery was constructed in 1605 including a little church called Amna Perkich which literally means “All Healing”, which was later expanded and turned into the magnificent Vank Cathedral. The construction was finished with major alterations to the design between 1655 and 1664 under the supervision of Archbishop David.

While expenses of the construction were provided by the Armenian Community, interior paintings were done with the financial assistance of Khajeh Avadich .

The architecture of Vank Cathedral

The architecture of Vank Cathedral has been influenced by churches in Iran and the Mesopotamian District. As a result, the architecture is actually a mixture of the 17th century Safavid Style, with an Islamic Style Dome. However, the dome is semi-octagonal apse to give it a western look.

The exterior of the monument represents the local style with typical pastel hues. The interior design of the monument, with flower patterns and bright colors, also has a Persian Style. The dados of the church's inner walls are covered with rich ceramics dating from 1710-1716.

Apart from the church and the graveyard, the complex includes also a memorial to remember the massacre carried out by the Ottomans and a museum displaying artwork, precious and sacred objects belonging to the Armenian tradition, tapestry, documents, books and maps most of which recalling the Armenian genocide.

The main entrance is a large beautiful wooden door. By entering the courtyard, you will face with a large freestanding belfry, and towers over the graves of Orthodox and Protestant Christians. Among the most important persons buried here are Archbishop Khachatur Gesaratsi, the founder of the first Iranian printing-house, and Archbishop David, the founder of the present structure of the Yank Church. 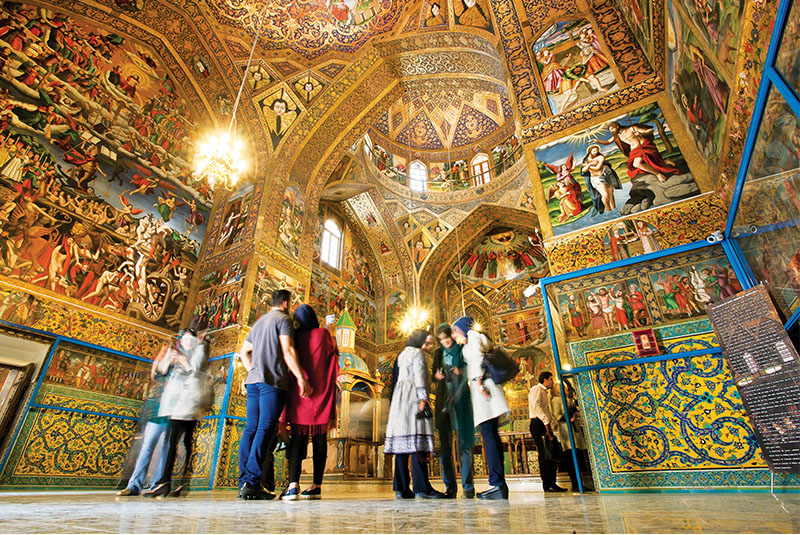 On the right side of the belfry, there a large blue inscription, and on the left side on a raised area, there is a memorial of the victims of the Ottoman Massacre. The inscriptions invite the readers to pray for the constructor of the church and his descendants. The portal inscription is in Armenian and contains the name of Shah Abbas II and the dates of 1104 and 1113 of the Armenian calendar (1692 and 1701 A.D.) as the dates of the commencement and completion of the church.

The courtyard of the complex has four sculptures. Two of them, located in front of the museum, portray Mesrop Mashtots, the inventor of the Armenian script, and Khachatur Gesaratsi. Two others, located in front of the library, depict the famous Armenian poets, Barur Sevak, and Hovannes Shiraz. In 1975, a memorial was installed in the Courtyard of the church to commemorate the 60th anniversary of the genocide of 1915.

At the corner of the courtyard there is a guesthouse, and across that, it’s the Library and Museum.

There is also a printing house at the courtyard, which is known as the first of its kind in Iran and the Middle East.

The interior design and paintings of the Vank Cathedral are amazing, and it is mostly the reason why people go and visit the cathedral. All of the paintings are the work of Armenian craftsmen, who learned their craft in Europe and were obviously influenced by Dutch and Italian masters. 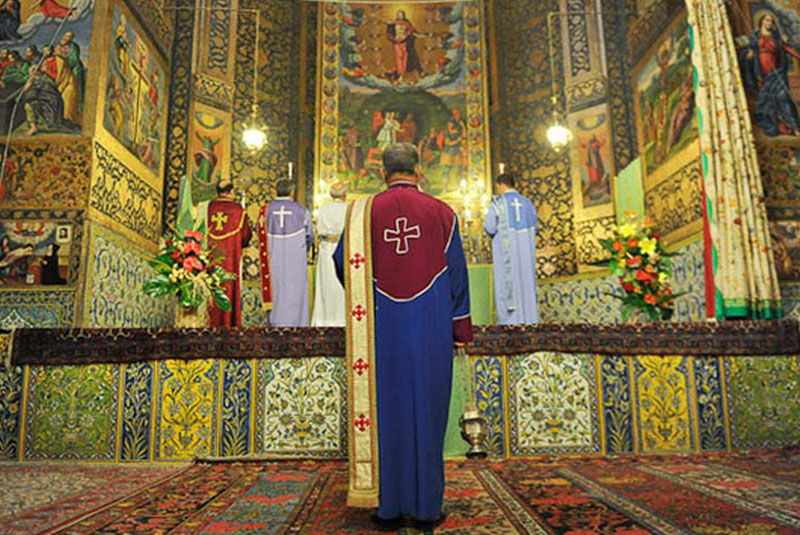 The paintings combine Bible stories on the dome, Persian floral ornaments on the ceilings and Armenian national motifs on the walls. Visitors can also see scenes of the life of Armenian martyrs being tortured by Ottomans. Frescos are framed with golden and blue tiles, creating a warm and rich atmosphere inside the church.

On the northern wall, there are resurrection images, on top, it is the painting of Paradise, the entrance of the Deliverers, and in the lower part of hell with fears of fire, a few dragons, and dams of Rome, angels who pour out sinners into the hole.

The two-story building of the museum houses antiquities, relating mainly to the history and religion of the Armenians in Jolfa At the Museum of Armenian Culture there are 700 handwritten books, the first book printed in Iran, a variety of objects related to Armenian community in Isfahan such as Safavid costumes, tapestries, European paintings brought back by Armenian merchants, embroidery, and other ethnological displays related to Armenian culture and religion. There are several carved stones showing scenes from the Bible outside the museum.

One interesting item at the museum that visitor can read under a microscope is a passage from the Proverbs that is written on a hair with a diamond pen. 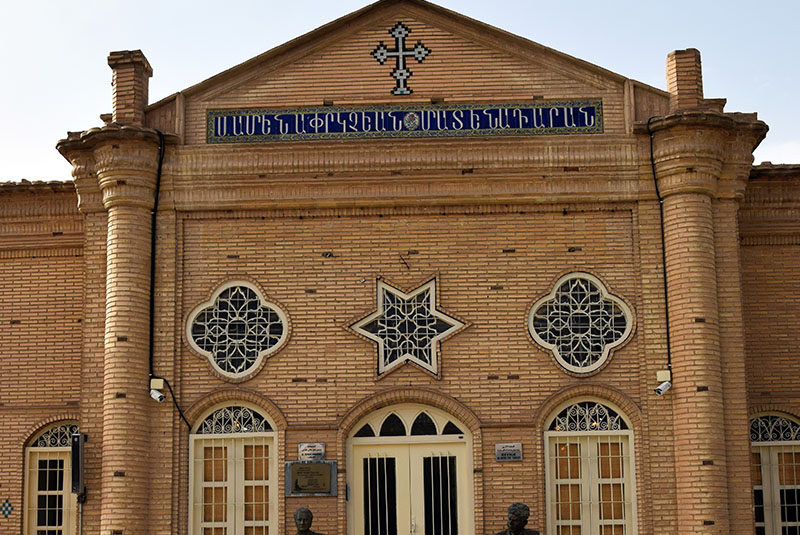 *The cathedral is closed on Christian religious celebrations.