The moment you hear the name of city Shiraz, you can definitely smell the fragrance of citrus, with unparalleled effects in front of you. You can go for hours wandering on its streets and fulfilling your moments with a magnificent flavor, or give your heart to Hafiz and Saadi, and review their poems to learn life lessons

of these together create an unforgettable experience for you and serve as a lasting memory in the corners of the mind. One of these memories is undoubtedly the sightseeing in the gardens of this beautiful city the extraordinary Eram Garden, adorned with Iranian architecture and opened up to everyone with a delightful atmosphere and an uplifting spirit like a generous host. You need to walk through history in this piece of heaven on earth when you travel to Shiraz.

Eram Garden (in Persian; Bagh-E Eram), one of the nine Persian Gardens inscribed on UNESCO‘s world heritage sites, is located in Shiraz, Iran. It is a historic and botanical garden and even though a lot of research has been done on the garden it still is not clear when it was exactly built. As the 19th century mansion, it is still used for educational purposes due to its vast diversity of plants and vegetation. Vegetation diversity in the Eram Garden is very high and there are plants from many parts of the world; which make the garden a fair of flowers and plants, with a variety of ornamental flowers and herbs. 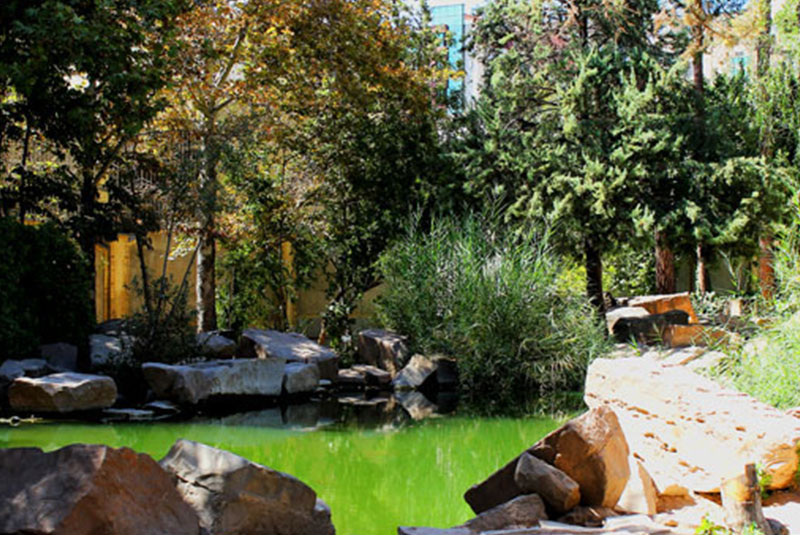 Eram Garden is a magnificent combination of history and nature, in early spring when there are thousands of blossoms on the trees, you can smell the perfect fragrance and invite your eyes to the party of colors. During May is, for sure, the best time to visit the garden and experience a walk in an earthly piece of heaven in Shiraz.

The most interesting part of the garden is a passageway built from the east to the west in the middle of the garden, and on both sides, the cedar trees have been planted. Among these trees, there is a tall, 35-meter high and thousands of years old Cypress that attracts everyone's attention. This tree is the tallest in Shiraz, which, due to its harmony with other planets around it, is called “Sarv-E Naz” with the meaning of being cute and attractive cypress. At the foot of this tree, there is a solid and ancient "vine” that embraces its branches from foot to tree, giving it a special look.

The freshwater that flows into the basin and enters the area under the iron fence of the basin, is why there is much freshness in the garden. The water continues to flow into the pools around the pool to flow through the wide passage of the main passage and other streams and plant trees and plants. The mainstream of clear water that enters the orchard building from the Indoor Garden and then pours in the pool and then around the large swimming pool and streams of the garden.

The main building of the Eram Garden can be considered as a fairly complete example of the buildings of the middle Qajar era, the features of which, like other monuments of its period, reflect the principles of architecture of Zandieh and Safavid, and even the tiles of the mansion facade are also quite The images are imitated from the ones imaged on the walls of one of the Safavid era buildings.

The other building in the western part is another interesting point of the garden, consisting of three floors with many decorations and roofing of the gable, and its constructor is Haji Mohammad Hassan Memar Shirazi. This mansion is built in the east and has architectural beauty, oil paintings, carvings of rock, and paintings stone, tiling and plastering, iron lattice windows. the forehead of the building, you can see magnificent stone pillars and exquisite wood carvings. The building could be considered as the masterpiece of art in the Qajar era.

In each period of its approximately 150 years of life, despite the changes in the garden, its area has also increased and decreased, but today its size is about 110380 square meters. The direction of the earth's gradient in the garden is from the west to the east, and the great gradient of the earth has led architects to think about ways to create steps in the parts of the main and secondary passages of the garden. These breathtaking landscapes are added to the beauty of the garden and give it a different look.

In front of the building on the east side, there is a large pond with a total area of 335 square meters, the environment of which is composed of 18 large stone blocks, and probably is being constructed in the course of Jannie Khan Ilkhani. In the past, this pool used to have a greater depth, but today its depth is about half a meter. In the four corners of this pool, there are four palms of Phoenix which are very tall and beautiful and have given the garden a superb view.

The Persian Gardens; the UNESCO World Heritage of Iran

All nine Persian gardens have the same features and elements. They were all chosen in a way that they could easily benefit the sunlight and all its effects. Textures and shapes were meticulously chosen by the architects to control and use the natural force of the sunlight in the garden.

The Persian style often attempts to join the inside of the building with the outdoors thorough and inner courtyard and with the surrounding garden. Designers most of the time use some architectural elements such as arches to divide between outdoor and interior areas.

Iran’s weather and geographical condition had made shade and water very important features and without them, the garden would have been unusable. Trees and trellises largely feature as biotic shades and pavilions and walls are also are structurally prominent in blocking the sun. in order to defeat the heat and use water properly in dry areas irrigation may be required. It was provided via a form of the underground tunnel called “qanat” that transports water from a local aquifer. Qanats are considered as cultural properties of Persia.

The presence of the name of one of the Iranian gardens in the UNESCO World List is an indication of the high value of these gardens to the world. Visiting it will give you a different experience so be sure to include them in travel plans in Shiraz.