Qazvin is one of the most beautiful and historic cities in Iran. The city used to be the ancient capital in the Persian Empire. Therefore, there are a number of magnificent sites and incredible landscapes in the city.

Among all the places to visit in Qazvin, Caravanserai of Sa’d al-Saltaneh which is currently the biggest urban caravanserai complex in Iran is a must-see. Recently, the caravanserai has been renovated, and some parts of it have a modern feeling. Currently, it is the center of art and design in the city, and independent artists showcasing exquisitely handmade crafted wares like jewelry, handicrafts, carpets, paintings, and ceramics. There are also some restaurants, sharbat khaneh, and café at the place. Here, we are going to briefly introduce this magnificent place and talk about its history and architecture. 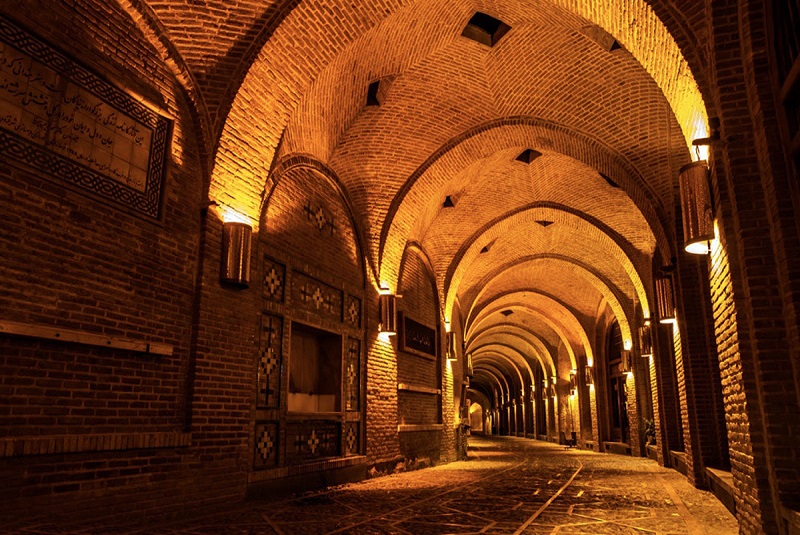 About Caravanserai of Sa'd al-Saltaneh

This 135-year-old caravanserai is the world’s biggest urban caravanserai complex and it is one of Iran’s best-preserved urban caravanserais. The caravanserai is located right next to the bazaar of Qazvin and it covers an area of 6,000 meters square. The complex consists of 7 yards, a bazaar, and a dedicated bathhouse. The same as other caravanserais in Iran, the Sa’d al-Saltaneh Caravanserai lost its original function and is now mostly an authentic historic landmark of the city.

According to Tehran Times, on June 2019, the director of the World Crafts Council - Asia Pacific Region (WCC-APR), Ghada Hijavi, paid a visit to the marketplace to assess the possibility of registration of the 19th-century Sa’d al-Saltaneh marketplace.

Hijavi proposed establishing of a museum dedicated to handicrafts from all over the globe in or next to the marketplace, adding such a museum along with offering handicrafts inappropriate packages is among necessities for the global registration of this place, as the first-ever Iranian handicrafts market.

The History of Caravanserai of Sa'd al-Saltaneh

Before the First World War, the Caravanserai was the center of trade and business in the city. However, after the political changes in the Russian government, it lost its connection bridge to European and East Asian countries.

This historical landmark was initially registered in the subset of Qazvin bazaar on December 8, 1937. Later, it was separately registered under the name the Caravanserai of Sa’d al-Saltaneh.

Finally, in 2005, Sa’dieh Bathroom was separated from the caravanserai under the registration number of 12598.

The Architecture of Caravanserai of Sa'd al-Saltaneh

The complex has three architectural typologies including passages with small rooms to accommodate caravans, spaces for the entrance of livestock as well as water reservoirs and baths for guests.

The caravanserai’s main entrance opens to the Imam Street in Qazvin. A beautiful vestibule connects the entrance to the main yard of the structure that is surrounded with chambers decorated with little verandas. Behind the eastern chambers, there lies the large warehouse as well as the Sadieh Bathhouse.

Moreover, some hujrehs or the residing rooms for the travelers are situated one meter above the courtyard ground level. The hallway behind the southern balcony has the largest dome as well as four semi-domes adjacent to it.

The historical structure lost its brisk market due to several political and economic changes over time with businessmen gradually abandoning their stores.