Kalpourgan Village, the first handicraft village in the world by WCC

Iran is the land of wonders and when you travel to Iran, you will be definitely amazed by the number of World Heritage Sites in Iran. Currently, in 2019, Iran has 22 cultural and 2 natural properties inscribed on the World Heritage List. 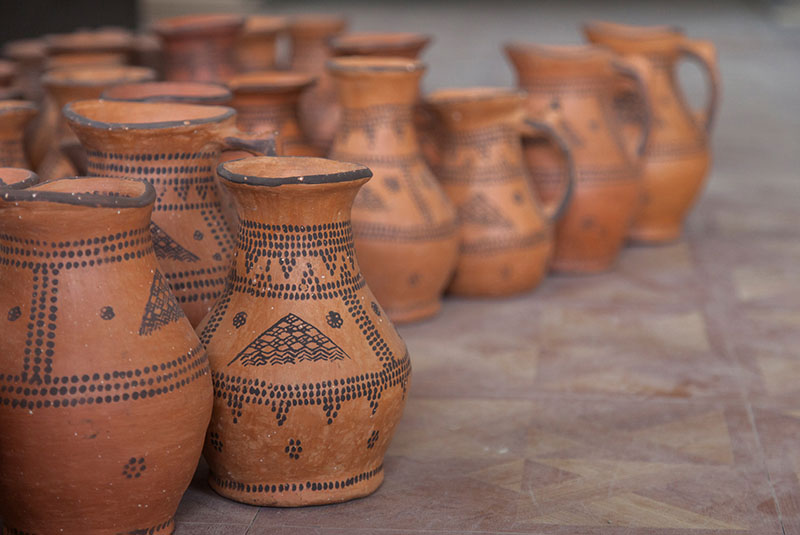 Kalpourgan is a village which is located 25 kilometers east of Saravan City, in Sistan and Baluchistan Province, in the southeast of Iran. All inhabitants of this village are from Baluch ethnic group. The village language is Baluchi and Makuran Dialect. Despite the passing of several centuries, the people of this Village still keep the customs and traditions of their ancestors, especially religious rites. The same as other parts of the province, the village has a hot and humid climate most of the year.

The pottery in Kalpourgan Village

The main and common Handicrafts of the Village are mostly mat-weaving, needlework, and pottery. The potteries produced in the village have their roots in the history, bearing finger swipe marks of the Baluch women in the predominantly tribal village for the past 7,000 years. Throughout history, pottery art belonged to women because men were hunting or farming and, according to historical evidence, women were the creators of pottery art. What distinguishes Kalpoorgan’s pottery from other places is its unique features. The interesting feature of the pottery of Kalpourgan is their handles. Unlike present-day pottery, these handles are even more resistant than the vessels themselves. Each handle is formed out of a thick coil of mud, which the artisan pastes to the moist body of the vessel and gives it the desired shape by means of different tools. Kalpourgan pottery is also known for its diversity, which manifests itself in the form of vessels shaped like animal heads, pomegranate-shaped incense burners (used to burn wild rue seeds and locally known as sokaky), vessels shaped as camels, etc. The techniques of making pottery in this area are the same as several hundred years ago, and this is a primitive and very simple method that makes the potter’s art unique. 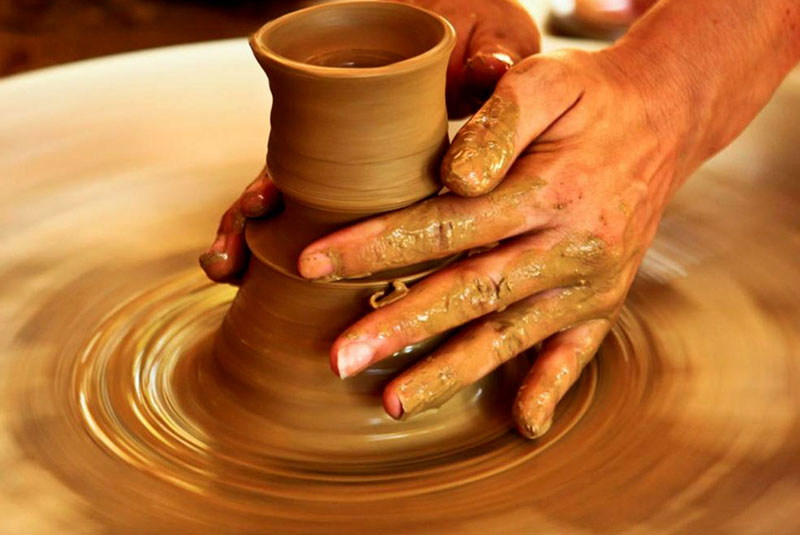 For decoration and painting, they use Titok stone. This stone is found in the hilltop area in Zaboli’s section, and its color is usually brown or black. This rock is a manganese rock and the color obtained from this stone is brown. First, a small piece of Titok stone is placed on a large amount of water that is poured on some water and, by the action of the particles, the particles are dissolved well in water, then by a small piece of wood of the size of the stick, usually of the genus The wood of the palm tree is painted on the pottery. Pottery is completely geometrical and reminding us of ancient earthenware designs. The decorations on the potteries are abstract symbols, handed down from one generation to other, and narrate secret and mystery of spiritual and inmost desires of artist based on their environment, as well as showing off her/his beliefs and values, these patterns and designs are very similar to designs on potteries of prehistoric and early centuries of historical eras. Titok Stone has been used to decorate and paint. This stone can be found in Achaar Hill area in Kahouran, Mehrestan. Its color is usually brown or black. This stone is some kind of manganese stone and produces a brown color. Currently, 50 women in the village do this work. Almost all of them involved in the process of making pottery, while other stages like sailing, providing clay and maintenance are done by some of the village’s men. The raw material used in the manufacture of Kalpourgan pottery consists of a particular type of clay. Villagers bring it in from a region known as Mashkotak, two kilometers northeast of Kalpourgan, and blend it with a slip-like mixture to prepare the clay, which they hand over to nimble-fingered women. The only active workshop of the village is Kalpouregan old museum, it is almost 44 years old. Not only pottery is made in this workshop, but also training courses is held up and a part of its space is considered for pottery museum. Kalpourgan village’s women are breaking cultural boundaries through the art and expressing and empowering themselves inside their traditional community.