The Best places for Muharram observances in Iran? (Travel to Iran during Muharram and Ashura)

When is Muharam? What is the custom?

The celebration of Muharram in Iran is actually one of the biggest and significant events of Shia Muslims in the world. Therefore, travel to Iran during Ashura can be a fascinating experience, which you should not miss.

Here is all you need to know about Muharram, Ashura, the ritual, and the best places for Muharram observances.

Why is Muharram celebrated? 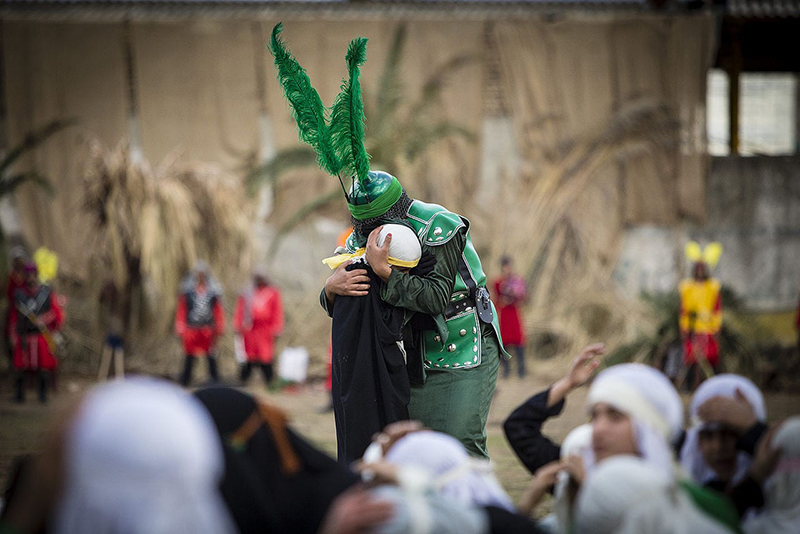 Most of the foreigners think that Muharram is celebrated but it’s actually a ritual.

Muharram is known as one of the holiest month in the Islamic calendar. From the first of Muharram to twentieth of Safar, Shia and Sunni Muslims commemorate the death of Imam Hussein ibn Ali, the grandson of Muhammad.

Imam Hussain is highly regarded for his stand against Yazid, the caliph who ruled Muslim lands. Hussain, his family, and followers were deprived of water for more than three days and were eventually killed or taken captive by the army of Yazid I at the Battle of Karbala.

Every year a large number of Shia make a pilgrimage to the mausoleum of Imam al-Hussein and his 72 companions in Karbala (Iraq) and take part in rituals.

The Battle of Karbala lasted from morning to sunset on October 10, 680 (Muharram 10, 61 AH). (1tto) Hussein’s small group of companions and family members (in total around 72 men and women and children) fought against a large army under the command of Umar ibn Sa'ad and were killed near the river (Euphrates), from which they were not allowed to get water.

Once the Umayyad troops had murdered Hussein and his male followers, they looted the tents, stripped women of their jewelry, and took the skin upon which Zain al-Abidin was prostrate.

Hussein’s sister Zaynab was taken along with the enslaved women to the caliph in Damascus when she was imprisoned and after a year eventually was allowed to return to Medina.

The mourning of Muharram takes place in mosques, holy places and streets of Tehran and hundreds of other cities of Iran.

The Customs of Muharram and Ashura

The same as every celebration and event in the world, Muharram and Ashura Procession include a number of customs. To name some, there are Ta’ziye, Sine Zani, Gel Mali, Nakhl Gardani, and Mash’al Gardani. 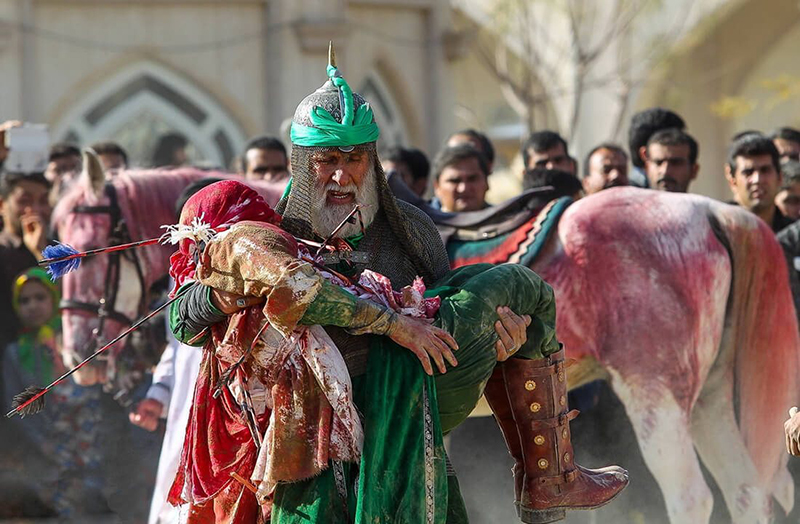 Ta'ziyeh events usually take place during the first ten days of Muharram in different cities of Iran, though cities like Isfahan, Arak, and Yazd are famous for their strong Ta'ziyeh culture. 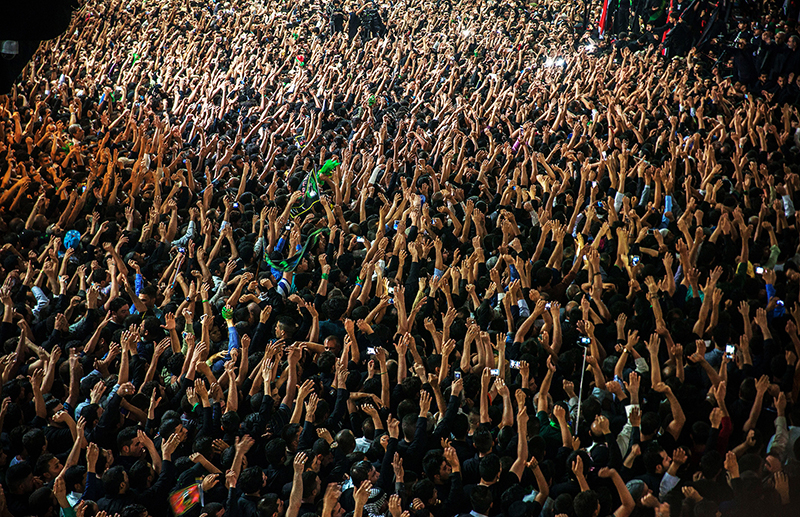 One of the most common forms of public mourning involves a tradition known as Sine-Zani (Chest beating).

This action involves a rhythmic and unified beating of the chest with the palm of the hand, in tune with percussion drums and vocal music, very similar to the Christian Gospel.

Some people do the action using a lashing tool with short metallic chains attached to a wooden handle. 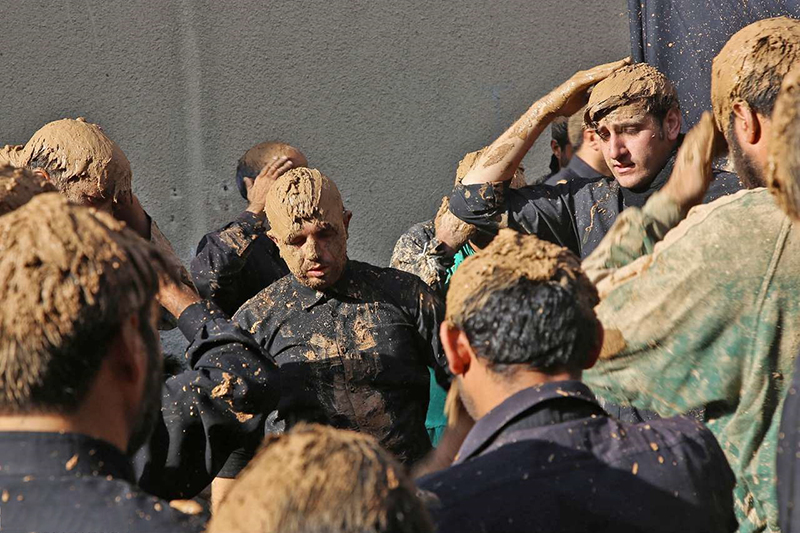 Gel Mali, literally means covering in mud. It is another Muharram tradition which is mostly seen in Lurestan Province.

Pools of mud are prepared three days before Ashura, and on the day of Ashura, men spread the mud on their heads and shoulders. Covering their bodies by mud is a sign of great disaster and can also be observed when loved ones have passed away. 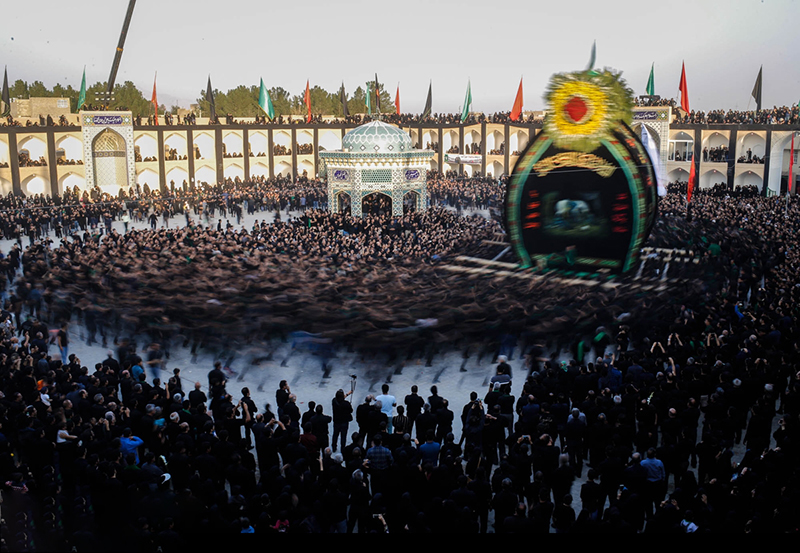 While most of the ceremonies of Muharram can be seen in all cities, Nakhl Gardani only takes place in some cities such as Yazd.

During the ceremony, people (sometimes hundreds of men) carry around a Nakhl (Plum Tree) on Ashura Day.

The Nakhl is decorated with fabrics, mirrors, swords, flags, and other religious symbols. It is the symbol of carrying Imam Hussain’s coffin.

Thousands of people gather o Ashura Noon to watch the ritual at the Amir Chakhmagh Square in Yazd.

The decorations surrounding each Nakhl is taken off after the ceremony and the wooden base can be found in its dedicated spot throughout the year until it gets used again the following year. 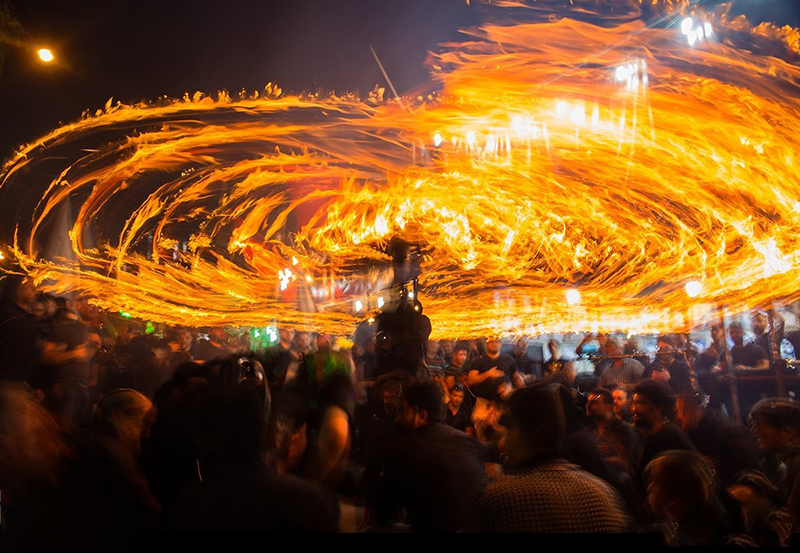 The act of turning around a torch in a circular pattern is known as “Mash’al Gardani”. This ritual can be usually observed among Arab ethnic groups, as well as cities like Qom, Shahr-e Rey, and Ardakan.

In the first day of Muharram, torches are set on fire and carried around by groups of mourners to announce the beginning of Muharram.

The same ritual takes place on the 8th night of Muharram to show that the day of Ashura, the date Imam Hussain was martyred by his enemies, is close.

In this ritual, groups of people holding and rotating the torches move around neighborhoods while religious music is being played.

The Best places for Muharram observances in Iran?

Are you planning to visit Iran during Muharram? Do you have any idea of where to go and see the event?

According to the Tehran Times, a total of 1,235 tourists from 22 countries attended this religious services in Yazd during Ashura in 2018.

A majority of the visitors were from Italy, Germany, France, China, and Spain, the official added. Since the celebration of Muharram in Iran is a breathtaking experience, you should choose the best place from all the possible places to visit and enjoy the event.

People from all over the world are welcome to participate in this amazing event. Here is the list of best places to watch the Ashura Procession:

When is Muharram in Iran?

The official Iranian calendar is a solar one, however, when working with Iran, it is important to recognize that the country has two different sets of calendar events.

Now, the significance of these two different sets of events lies in the fact that the Islamic calendar is a lunar one. A lunar year is ten days shorter than a solar one. Thus, when operating in Iran, you see that Islamic events occur ten days before the previous year – a phenomenon that affects your annual planning.

The Muharram starts on the 1st of September 2019, and therefore the Ashura will be on the 10th. Don’t forget that the Ashura is a national holiday and all the public and private sectors are closed on that special day.