Saadi Shirazi, the Major Persian Poet of All Time

One of the best places to visit in Shiraz is the Tomb of Saadi, known as Sa'diyeh. Saadi Shirazi is the major Persian poet of all time, who was born and buried in Shiraz. It is said that he is one of the most influential poets of Persian literature in the medieval period.

He is admired for his artistry poems, the quality of his writing, the depth of his social and moral thoughts, as a result, he is known as “Master of Speech”. He has also been titled as “Sheikh” because of his great knowledge.

21st of April coincides with the birth anniversary of Saadi Shirazi, and it is celebrated in different cities all over Iran, especially in Shiraz. So, if you are planning to travel to Shiraz at this time, don’t miss your chance of participating in this amazing celebration. Here, we are going to briefly introduce Saadi and write about his most popular works.

Saadi Shirazi was born in Shiraz in the 13th century. He took his name from the name of a local atabeg (prince), Saʿd ibn Zangī. According to some evidence, he was born in 1200, while in some others, it is said that he was born sometime between 1213 and 1219. In Golestan, composed in 1258, he addresses himself as a person who is 50 years old but is still naïve and does not know much about life. 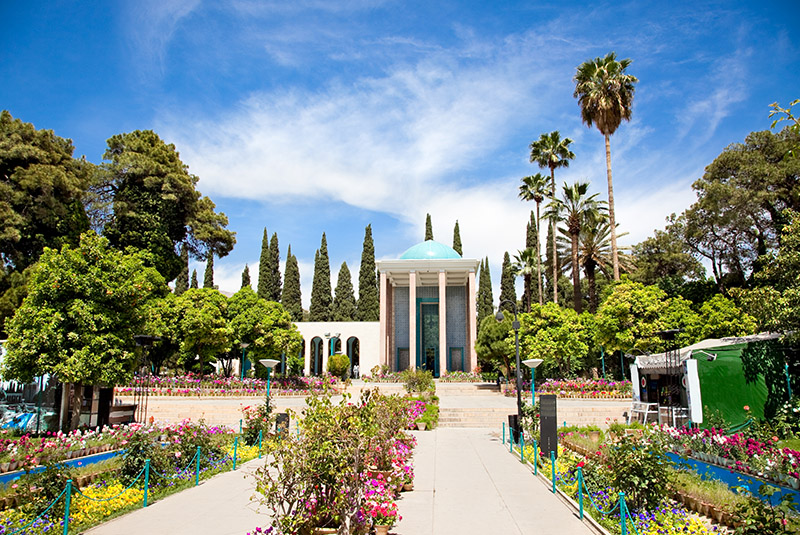 His father passed away when he was a child. In his poems, he narrates memories of going out with his father as a child during festivities. In 1225, he left Shiraz to explore the world and visit foreign lands. It was the time of the invasion of Mongols to Fars Province.

He enrolled at the Nizamiyya University in Baghdad, Iraq after he left Shiraz. He studied Islamic sciences, law, governance, history, Persian literature, and Islamic theology at the university. According to one of his poem in Golestan, he tells us that he studied under the scholar Abu'l-Faraj ibn al-Jawzi.

The unsettled conditions following the Mongol invasion of Khwarezm and Iran led him to wander for thirty years abroad through Anatolia (where he visited the Port of Adana and near Konya met ghazi landlords), Syria (where he mentions the famine in Damascus), Egypt (where he describes its music, bazaars, clerics, and elites), and Iraq (where he visits the port of Basra and the Tigris river). He also visited Jerusalem and then set out on a pilgrimage to Mecca and Medina.

He claimed that he was held captive by the Franks and put to work in the trenches of the fortress of Tripoli (now in Lebanon); however, this story, like many of his other “autobiographical” anecdotes, is considered highly suspect.

Due to the Mongol invasions, he was forced to live in isolated refugee camps for more than twenty years where he met bandits, Imams, men who formerly owned great wealth or commanded armies, intellectuals, and ordinary people. He sat in remote tea houses late into the night and exchanged views with merchants, farmers, preachers, wayfarers, thieves, and Sufi mendicants. As a result of this experience, his works reflect upon the lives of ordinary Iranians suffering displacement, agony, and conflict during the turbulent times of the Mongol invasion.

He finally returns to Persia where he meets his childhood companions in Isfahan and other cities. Saadi came back to Shiraz before 1257 CE in the same year he finished composition of his Bustan. He was in his late forties when he goes back to Shiraz. The city was under Atabak Abubakr ibn Sa'd ibn Zangi (1231–60), the Salghurid ruler of Fars.

Apparently, he spent the rest of his life in his birthplace and was greatly respected by the ruler and people. He passed away between 1291 and 1294 in Shiraz.

The two most reliable dates in Saadi’s biography are the dates of the completion of his two best-known books, the Bustan (The Orchard) and the Golestan (The Rose Garden). The Bustan was completed late in the year of 1257, after his return to Shiraz, and Golestan was completed a year later in 1258.

Goethe, the famous German poet was influenced by Saadi in his works. He adapted some of Saadi’s poems from Bustan and Golestan in his book called West-Oestlicher Divan.

Golestan-e Saadi is one of the most influential works of prose in the Persian tradition. It was dedicated to the Salghurid Atabeg in Fars, Moẓaffaral-Din Abu Bakr b. Saʿd b. Zangi (G51). The Golestan is a collection of poems and stories which is widely quoted as a source of wisdom.

Bustan is entirely in verse (epic meter). It consists of stories aptly illustrating the standard virtues recommended to Muslims (justice, liberality, modesty, and contentment) and reflections on the behavior of dervishes and their ecstatic practices.

Mausoleum of Saadi or Sa'diyeh

Mausoleum of Saadi or Sa'diyeh is situated just next to the Delgosha Garden, in the northeastern part of Shiraz. At first, the same place was his monastery in which he lived the last years of his life.

Shams al-Din Muhammad Saheb Divani first built a mausoleum over Saadi's tomb. According to Ibn Batooteh, visitors used to wash their clothes in a marble pond. It had been a tradition of the people of Shiraz before Islam and perhaps even before Saadi because they believed it had healing effects.

In 1589 (998 AH), his monastery was ruined by the ruler of Fars, Yaghoob Zolghadr. According to Muhammad Taghi Behrouzi, the reason was Saadi's attribution to the Sunni religion. Due to that, a while later, Ali- Akbar Ghavam al- Mulk Shirazi, a well-known scholar from Shiraz, replaced Saadi's tombstone and carved inscription of Saadi's Bustan on the stone. The tombstone has remained the same until the present day. 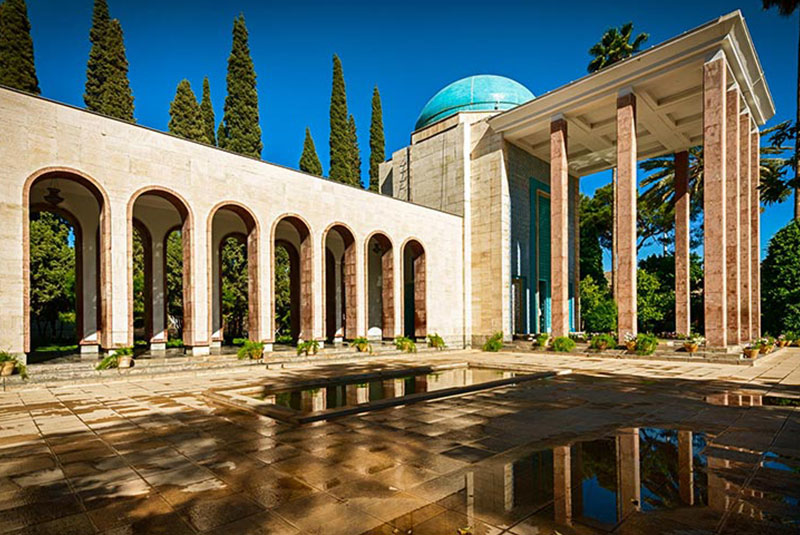 In 1773, under Karimkhan Zand, a glorious mausoleum made of plaster and brick was built above Saadi's tomb. Downstairs was a hallway. In the room located on the east side of this hallway, was Saadi's tomb surrounded by a wooden coverage and in another room on the west side another poet, Shoorideh Shirazi who was a blind poet from Shiraz, was rested according to his will. The upper floor was the same, except that in respect to Sheikh (Saadi), no room was built above the eastern room, in which Saadi's tomb was located.

During the Qajar Era, Saadi's mausoleum went under restoration works, and years later some parts of the mausoleum were repaired and restored with the order of Habib Allah Khan Qavam al- Mulk.

In 1949 a contract was signed with Mohsen Foroughi and Ali Sadeghi to design another mausoleum. In March 1951, the reconstruction of the present Saadi's mausoleum started. It was an adaptation of Isfahan's Chehel- Sotoun Palace and a combination of modern and classic in terms of architecture. It covers an area of 7700 square meter garden and was finished in 1953. It was officially reopened to the public with the attendance of Minister of Culture, Mahmoud Hesabi and Ali Asghar Hekmat. On that same day, a statue of Saadi was unveiled at the gate of Isfahan, this statue was built by Abolhassan Sedighi.

The dome above the tomb is decorated with turquoise colored tiles. Stones used at the base of the structure are black. The columns and the frontal part of the porticos are built with red granite stone. Travertine covers the facade of the mausoleum and the interior walls are built with marble. The tomb is placed at the center of the octagon. On 7 sides of the mausoleum, there are 7 inscriptions of Gulistan, Bustan, and his mono- rhyme lyrics (Qasidas), written by Ibrahim Bouzari. Another inscription carved by Ali Asghar Hekmat describes the construction of the tomb. 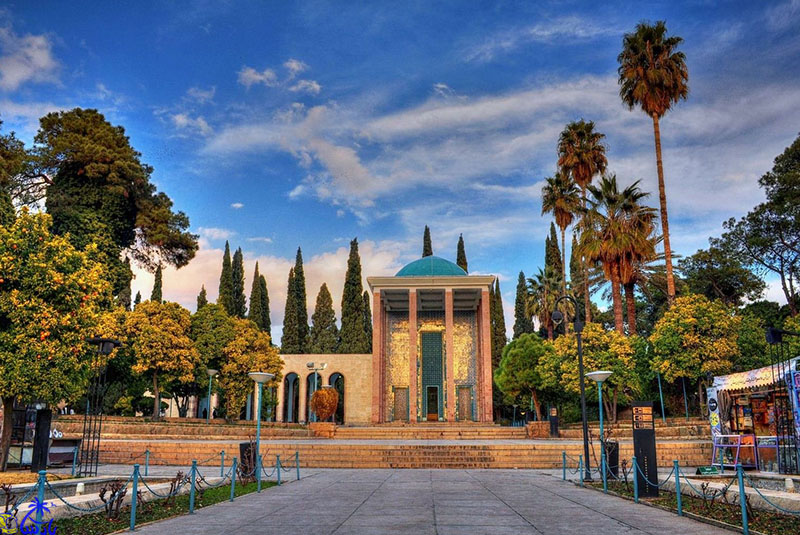 The main entrance to the garden is designed by famous architect Andre Godard, embroidered by a verse of Saadi. In front of the portico, a pond is built, filled with coins, which have been dropped by the visitors to make their wish come true. There's Qanat or aqueduct with the depth of 10 meters which flows under the ground and pours into the fish pond.

There's an octagonal shaped fish pond located on the left-hand side of the mausoleum. It's been reputed that Saadi built mini marble ponds near his hermitage. Tiling of the ponds are specific to Seljuk’s and in 1993 it has been designed by the master of tiling known as "Tirandaz" and executed by Cultural Heritage Organization.