Top 5 Iranian Handicraft; on the occasion of World Handicrafts Day

The World Crafts Council (WCC), affiliated to UNESCO, was founded in 1964 which is a non-profit, non-governmental organization, established to promote fellowship and foster economic development through income-generating craft-related activities. The WCC is organized into five regions: Africa, Asia Pacific, Europe, Latin America and North America.

On the occasion of World handicraft, it may be a good idea to become familiar with some of the history and the most popular handicrafts of Iran.

Iranian art and architecture reflect a 5,000-year-old cultural tradition with a significant development over the history. Numerous artists have produced beautiful items which are known throughout the world. The most famous of Iranian handicrafts includes Persian Carpet, Minakari, Miniature, Khatamkari, and Ghalamzani (Metal-work). 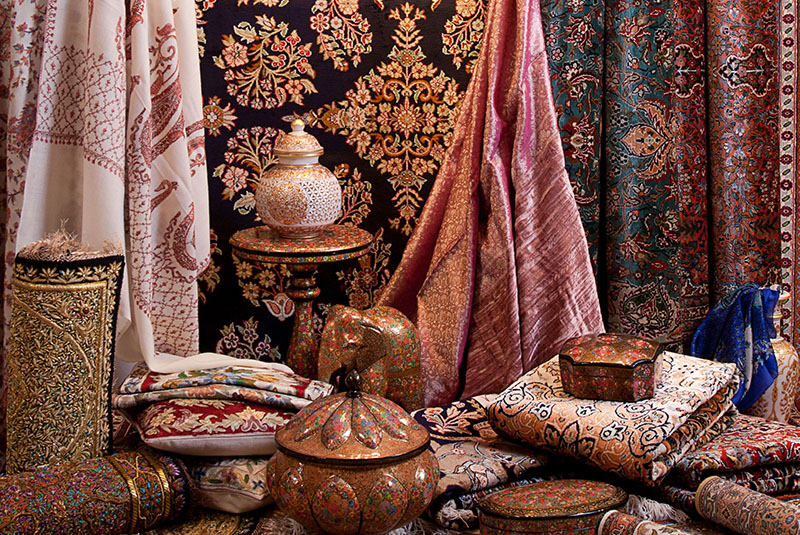 Persian Carpet is an inseparable item from Iranian art and culture. It is undoubtedly one of the most distinguished manifestations of Persian dates back to the Ancient Persia (c.500 BC). The "traditional skills of carpet weaving" in Fars Province and Kashan City were inscribed as Intangible Cultural Heritage Lists of UNESCO in 2010.

The pattern of carpets reminds you of the Persian garden which is full of florae, birds, and other animals. Wool, cotton, and silk are the most common materials in carpet weaving.

Traditional dyes used in Persian carpets are taken from plants and insects. As an example, red from “Madder”, yellow from “onion”, and black from “Oak apples”.

The art of Minakari or Enameling is the art of fire which is used to make decoration on metal and tile with mina glaze. The patterns used for enamel works are traditional designs depending on the preferences of the artist. In Iran, is mostly done on copper and silver. Enamel working and decorating metals with and baked coats is one of the distinguished courses of art in Isfahan. 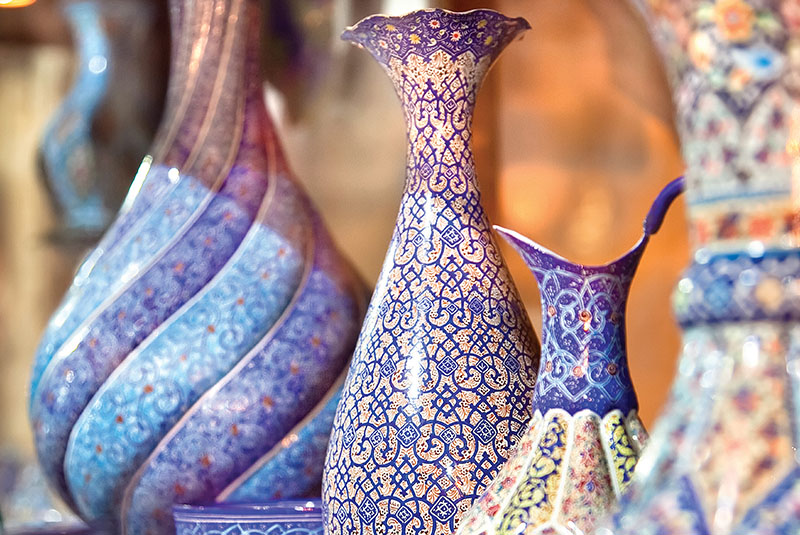 The greatest master of of Isfahan is Shokrollah Sanizadeh, whose ancestor was a renowned painter. One of the invaluable works of this master was used for printing a stamp for commemorating Iranian handicrafts in 2008-9 and registered as national heritage. These artists present their works in Chahar-Bagh Street and the vicinity of Naqsh-e Jahan Square.

The Persian miniature is a rich and detailed painting with religious or mythological patterns. According to the evidence the art of miniature painting in Persia started from early centuries in early post-Islam and after the collapse of Sassanians. However, the art has flourished in the 13th century during the Safavid dynasty. One of the specifications of Iranian miniature is the bright in which the pigments are mineral-based.

The earliest painted miniatures appeared in horizontal orientation without any frame. The vertical format first introduced in the 14th century.

Khatam Kari is the art of decorating wooden surfaces with small mosaic-like veneers in the form of triangles made of different woods and materials. These materials include Areca wood, Ebony, the wood of Citron Tree, Jujube wood, and bones of camel, horse, and cow.

The oldest item of Khatam-Kari art is dated back to the Safavid period, however, there is no evidence when the art started exactly. There are some similar works in other countries such as Syria and Lebanon but the cradle of Khatam-Kari is Iran.

Isfahan city has been the main center of Khatam working in Safavid period but, then it became popular in Shiraz. It is used to produce some objects such as backgammon board, chessboard, Quran rack, Frames and small boxes. 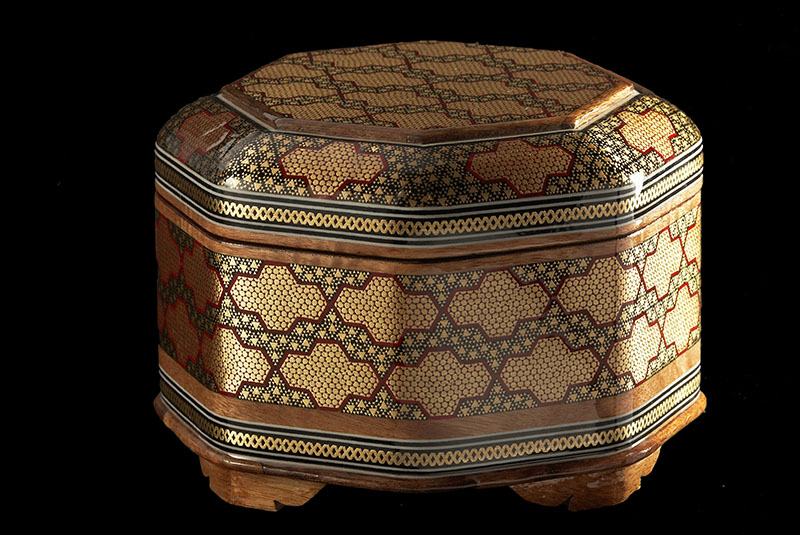 Ghalamzani is the art of carving superb designs on metals such as copper, brass, silver, and gold. The same as other Iranian arts, Isfahan is the main for engraving with a significant development in the Safavid dynasty.