Iran, one of the oldest nations on Earth, is home to many ancient, enigmatic, and strange civilizations.

Many facts regarding Iran's numerous ancient sites, particularly those in the country's central and southern regions, remain unknown until now. Many facts about these mysterious prehistoric civilizations are now regarded by the majority of people as fictions based on myth and fantasy. However, despite what would seem unbelievable, finds show that these civilizations had advanced significantly. For example, it is intriguing to learn that the bones of a woman's body at Shahr-e Sukhte (which means Burnt City), in the southern part of Iran, included the world's first known artificial eyeball, with two holes in both sides and a golden thread to hold it in place! In this blog, we are going to introduce you to the strange, mysterious city of Shahr-e Sukhte.

Where Is Shahr-e Sukhte Located? 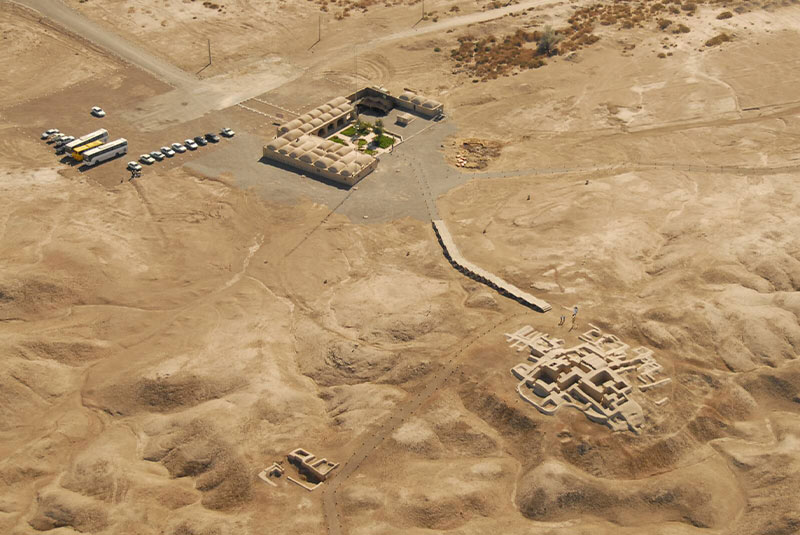 In the southwest of Iran, in a location known as Shahr-e Sukhteh, are the remnants of a large Bronze Age metropolis. This old city, the most significant ancient site in Sistan, is situated at the highest northern edge of the former delta, which was made possible by the Helmand River in the fourth and third millennia BC. As the greatest ancient city on the Iranian plateau, the 5,000-year-old Shahr-e Sukhte (Burnt City) of Sistan is a beautiful destination for both local and foreign tourists. The ruins of Iran's old city government, which are known as Shahr-e Sukhte, are situated in eastern Iran, in northern Sistan and Baluchestan, 56 kilometres from Zabol on the Zabol-Zahedan route. The city was constructed on the alluvium of the Helmand River and the beaches of Lake Hamoon.

The analysis of this city's ruins reveals how many sciences and technologies developed on Iran's plateau. Sociology, commerce, Archeology, trade and international exchanges, the evolution of architecture, the evolution of traditional arts and technologies, the history of urbanization and urban planning, zoology, history of medicine and related sciences, agriculture, nutrition, animal husbandry, entomology, metalworking, geology, botany, and jewellery making are just a few of the various sciences and technologies mentioned. Among the information and data gathered on this place are traces of the oldest surgical specimens, the oldest specimens of current textiles, the oldest mosaics, and the most recent finding of the oldest specimens of cumin, coriander, and wild pistachios. 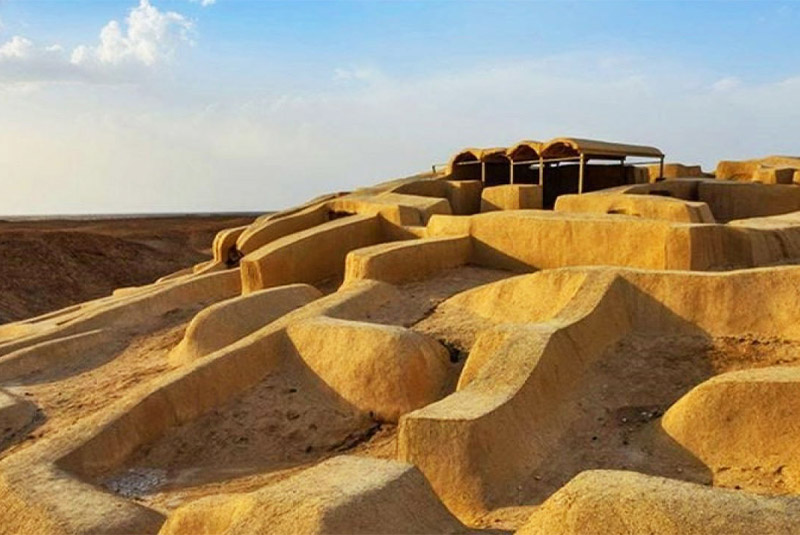 Ancient artifacts and fragments may be found on 120 hectares of the burnt city area, with the most extensive phase dating to the years 2500 to 2800 BC, when the area reached more than 80 hectares. In the course of 400 years, this city's cultural, political, social, and industrial growth transformed it from a little 15-hectare village into one of the biggest bronze cities in the Middle East. Only a few towns, such as Mohenjo-Daro in the Indus plain and Anshan or Tappeh Millian in Persia, Ur in Mesopotamia, and Susa on the Khuzestan plain, have been similar. Three main parts and three auxiliary parts make up the city. Five thousand years ago, Shahr-e Sukhte was a lush, fruitful area with a wide variety of attractive vegetation and plenty of willow, maple, and poplar trees. In 3,200 BC, Lake Hamoon was a sizable body of water that received its water from a number of permanent rivers, including Helmand. Excavations near Shahr-e Sukhte have revealed the bed of several streams and canals that are considered to have supplied the city's farms with water. This ancient city, which has a 5000-year history and is regarded as one of the most advanced ancient cities in the world, is the 17th historical monument of Iran on the UNESCO World's Heritage List.

Different Parts Of The Shahr-e Sukhte 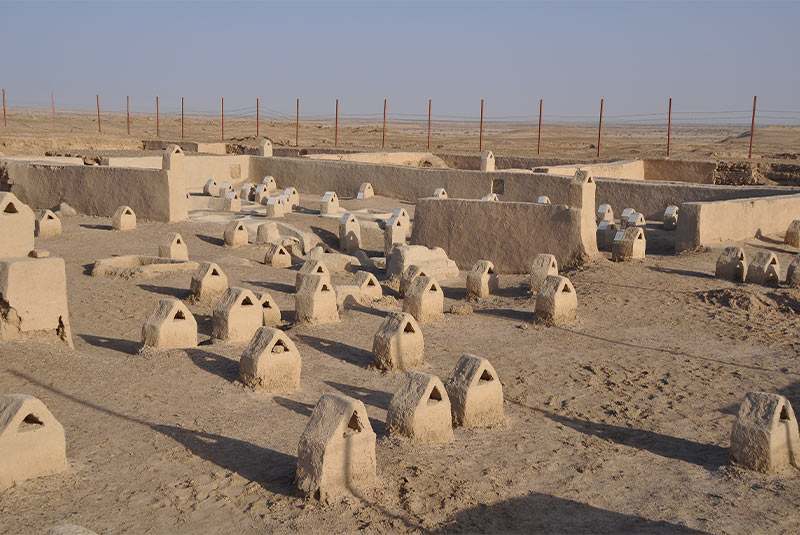 The city has a total size of around 151 hectares, say archaeologists. There are five distinct sections of the Shahr-e Sukhte, as evidenced by the remnants of that enormous, splendid, and ancient metropolis. The Residential Section, Central Section, Industrial Zone, Monuments, and Cemeteries are these five distinct sections. The Shahr-e Sukhteh's northeastern region is where the residential portion is situated. These five sections are arranged like a series of hills. The residential area makes up 80 hectares of the city's total 151 hectares. Regular alleyways and residences with water and sewage plumbing were discovered during excavations in the burnt city. These ceramic pipes exhibit a certain level of urban planning and feature cutting-edge facilities and equipment. In this region, some 310 burials have been found. Between 1997 and 2004, these 310 tombs were found during excavations. According to archaeologists, some people of Shahr-e Sukhte were interred in fabric and garment shrouds. Additionally, in some of the tombs found in this cemetery, there are signs of fabric on the bodies of the deceased. In cemeteries, these materials can be found in three distinct forms, such as:

The presence of pottery inside the tombs is another characteristic of the remains at the Shahr-e Sukhte cemetery. One may say that practically every tombstone in this cemetery has ceramic items. Along with pottery, there are other presents that are made of stone, wood, or fabric. Shahr-e Sukhte was the hub of several industrial and creative endeavours in addition to serving as the region's agricultural centre in the past. You might find it fascinating to hear that this old city has produced some exquisite and striking pieces of jewellery. The city's inhabitants also used tree wood to supply the fuel for their enormous pottery studios and jewellery studios. Similar to the Sumerian, Egyptian, and Sindh civilizations, the burnt city is situated in an area that is absolutely earthquake-proof.

The Most Important Discoveries In Shahr-e Sukhte

Along with the enormous amount of handmade items found in Shahr-e Sukhteh, different artifacts have also been recovered in the nearby Shahdad and Bam districts. Therefore, it appears that before it dried up, the Hirmand River, like the Nile River, offered a favourable environment for habitation and the development of towns in the area. Shahr-e Sukhteh was transformed into an astounding example of urbanization as a result, and during its height, it restored trade and cultural contacts with other ancient civilizations in Central Asia, Indians, and even as far away as China. Shahr-e Sukhteh was one of the greatest cities in the world during the rise of urbanization, according to what has been discovered in an area larger than 151 hectares, and specialists think it may be found up to 11 meters below the surface. A 20-centimetre layer of ash and dust concealed Shahr-e Sukhteh for around 4,000 years until it was eventually discovered.

The region's arid desert climate also contributed to the preservation of little that was left of an ancient civilization. The maze-like rooms in the buildings that had been preserved intact under the salt were where the archaeologists found more than 2 million artifacts. As a result, there is now a wonderful opportunity to study an ancient culture that was established approximately 3200 BC. The city is said to be situated where "Bronze Age" trade routes that span the Iranian plateau, when organized city-states first appeared and writing was formed in the Near East, connect. In fact, according to archaeologists, the oldest writing discovered so far was created in this area (Jiroft, Kerman Province), yet no language has been able to decipher it. Some of the most important discoveries in this ancient city are as following.

A 4,800-year-old artificial eyeball was found for the first time at Shahr-e Sukhte. This prosthetic eye was attached to the skull of a 25 to 30-year-old lady who was interred in one of the tombs from the burnt city. The woman's left eye contains an artificial eyeball that was implanted and has endured over time. Although the exact composition of this artificial eye is unknown, it appears that it was composed of natural bitumen combined with some sort of animal fat. According to the initial study, this eye belonged to the left eye of a large lady who was interred in grave number 6,705, who was probably between the ages of 25 and 30 and of mixed race (black and white). The tomb also included pottery, ornamental seals, a leather purse, and a bronze mirror. 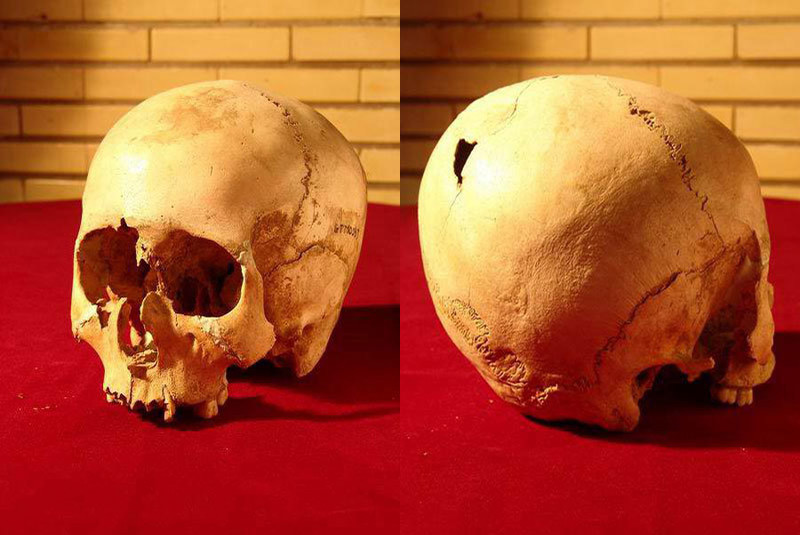 The finding of the first traces of brain surgery is one of this ancient city's most astonishing discoveries. In this ancient city, the skull of a 12- or 13-year-old girl has been found. She underwent surgery to correct her hydrocephalus 4,800 years ago, during which local surgeons removed a portion of her skull bone. This kid lived for a very long time after the procedure. Paleontologists have rebuilt this little girl's face using the full skeleton that has been discovered.

Discovery Of The World's Oldest Backgammon 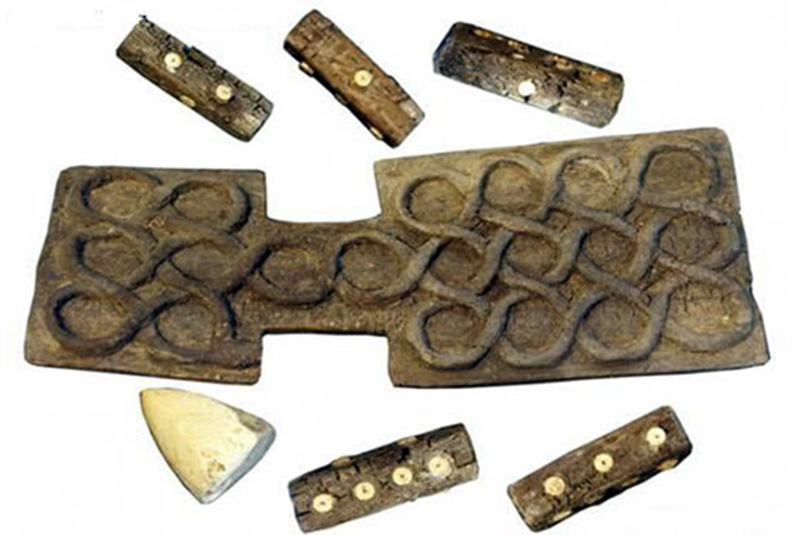 The ancient tomb Number 761 in the burnt city had the earliest backgammon ever discovered, which had 60 beads. Compared to the backgammon unearthed at the royal grave of Ur in Mesopotamia, this game is far older. This rectangular-shaped, ebony backgammon features a snake etched 20 times around it while gripping its tail in its teeth. The 60 beads that were set in an earthenware plate next to the backgammon are made of the typical stones of Shahre  Sukhte, including azure, agate, and turquoise. This backgammon includes 20 game houses.

Discovery Of The Oldest Ruler 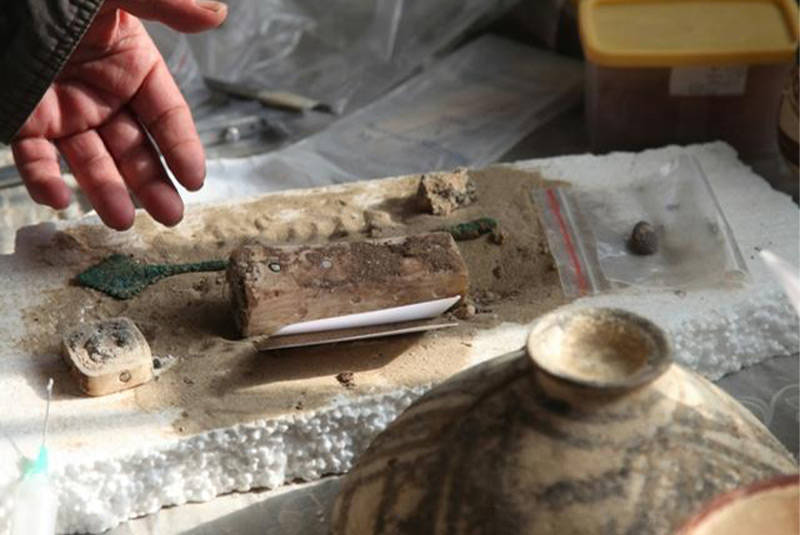 Archaeological digs in the burnt city have turned up a ruler made of ebony wood. This ebony ruler is 10 cm long and has a half-millimetre precision. Its finding reveals that the people of this ancient city achieved significant advancements in mathematics. 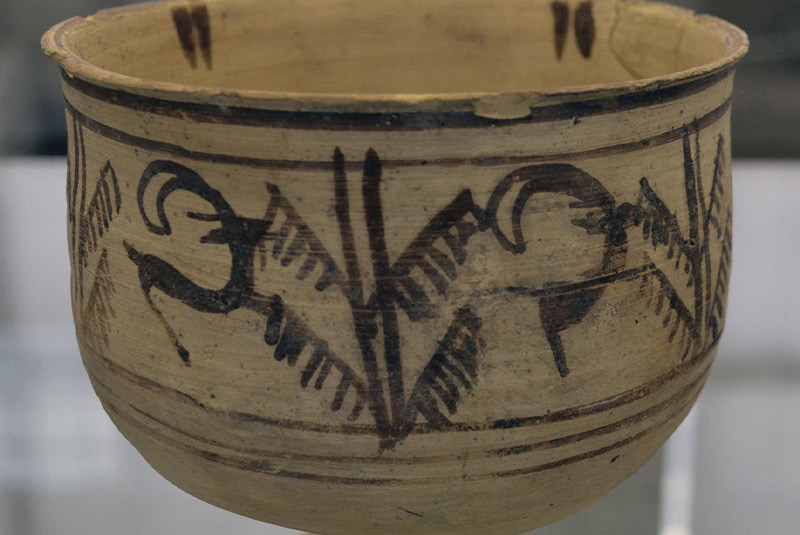 A cup with the depiction of a goat and a tree was discovered by archaeologists during the excavation of a 5,000-year-old grave. The movement of the goat toward the tree is repeated on purpose. Archaeologists were able to create a 20-second film sample of a moving scene by cropping these photographs closer together. One animal that is adept at scaling heights is the goat, and the painter of Shahr-e Sukhteh was able to represent this goat's jump with accuracy and agility. This 10 cm-tall cup is supported by a pedestal and was used for drinking. Although our study has revealed that this function is the earliest notion of the ancient people to give a "moving picture", and in today's perception of "animation," many dishes have forms that are just repeated with no movement.

Other Discoveries In Shahr-e Sukhte

One of the most extraordinary and stunning remnants of Iran's rich past is The Burnt City (Shahr-e Sukhte). Because of this, a journey to this historic city will be more enjoyable for travellers interested in ancient Iranian history or history buffs than any other vacation or location.The authenticity and originality of this culture, which fills visitors with an overpowering feeling of amazement, as well as the city's antiquity and extensive history, are what draw thousands of travellers here each year. The stunning desert scenery in Lut's surroundings only adds to its extraordinary attractiveness. Shahr-e Sukhteh, Perspolis, and other distinctive, historic archeological monuments of Iran should thus be better included on the must-see list of the country's attractions.