Iran is among the oldest countries in the world, with many celebrations, ceremonies, and customs held annually; The Celebration of Shabe Yalda (Yalda Night) is one of them.

When is Yalda Night?

"Shabe Yelda" was one of the holy nights celebrated since ancient Iran. It was included in the official calendar of the ancient Persians during the time of Darius I in 502 BC.and is annually celebrated on December 21 by Iranians worldwide.

Every year, Persians remind themselves that winter is coming as the days become shorter and the nights become darker and longer. Iranians celebrate the dawn of the first day of winter each year and welcome the longer days with pomegranates, poetry and sacred rituals.

Yalda is celebrated by millions of people from Iran and its neighbouring countries who share this ancient civilization and festivities, such as Azerbaijan, Iraqi Kurdistan, Afghanistan, Tajikistan, and Turkey. The celebration begins on the last day of autumn when the sun sets and continues until the dawn of the first day of winter.

This particular night was called Yalda, which means rebirth (of the sun) because the idea behind the celebration was to honour the triumph of light over darkness. Stay with us to learn more about this fantastic and historical Iranian celebration.

What is Yalda Night? 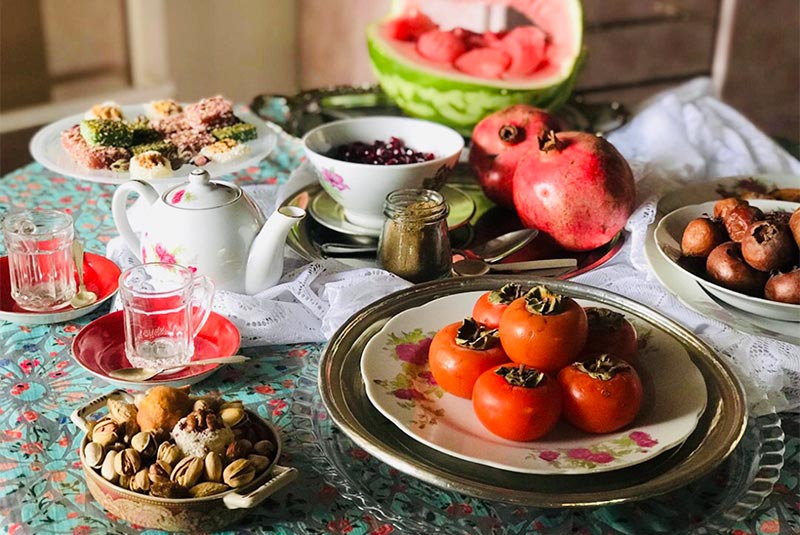 The festival's name, 'Yaldā', is ultimately a borrowing from Syriac-speaking Christians. In the first and third centuries, significant Eastern Christians fled to Iran seeking shelter from religious persecution. Through them, Iranians came in contact with their language and customs. Among these customs was the celebration of the birth of Jesus Christ which they called Yalda.

Yalda in Syriac (a Middle Aramaic dialect) means "birth", but in a religious context, it is the Syriac Christian proper name for Christmas. Because it fell nine months after Annunciation, it was celebrated on the eve of the winter solstice.

Chelleh means forty in Persian, and because this night is the opening of the forty days of the three-month winter, it is also called Shabe Chelle. Iranians divided seasons into a forty-days period called Chelle. There are three Chelle, one in summer and two in winter.

The first chelleh is in summer, and the remaining ones are in winter. They go by the name of the great and the small Chelleh. The two winter forty periods are known as the "great Chelleh". It starts from the first day of Dey to 11 Bahman, followed by the "small Chelleh" period, which starts from 10-13 Bahman to 30 Bahman, containing twenty nights and days added to create the second forty-day period of the small Chelleh.

Shabe Chelleh and Yalda Night are used interchangeably to refer to this ancient festival. Thus, Yalda Night and Shabeh Chelleh are the same.

Why Do Iranians Celebrate Yalda Night? 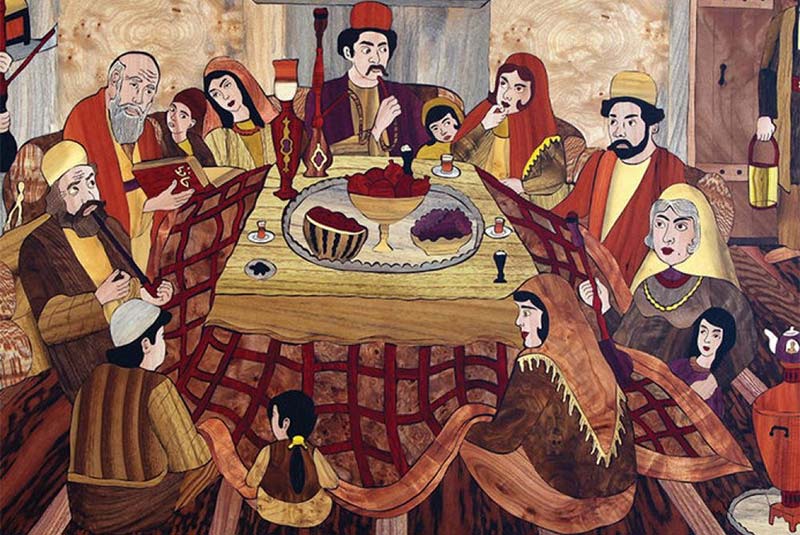 Ancient Iranians were used to the passing of seasons throughout the year due to their experience. They realized that in some seasons, the days were longer, so they could use more sunlight on those days.

The ancient Iranians were also followers of the Zoroastrian religion. In Zoroastrianism, darkness is associated with evil. They believed that the brightness and light of the sun were a symbol of prosperity and goodness and that they were in battle with the darkness of the night.

To prevent evil from winning, ancient Iranians usually gathered together in groups of family and friends to spend this night together. They would stay awake all night, share stories and have fun celebrating the sun's birth. And this is where the name Yalda gives meaning to itself.

In Iranian culture and many other cultures, darkness connotes evil and loneliness. On the other hand, the sunlight, joy and life. This is why Iranians celebrate the victory of light over darkness.

How is Yalda Celebration Held? 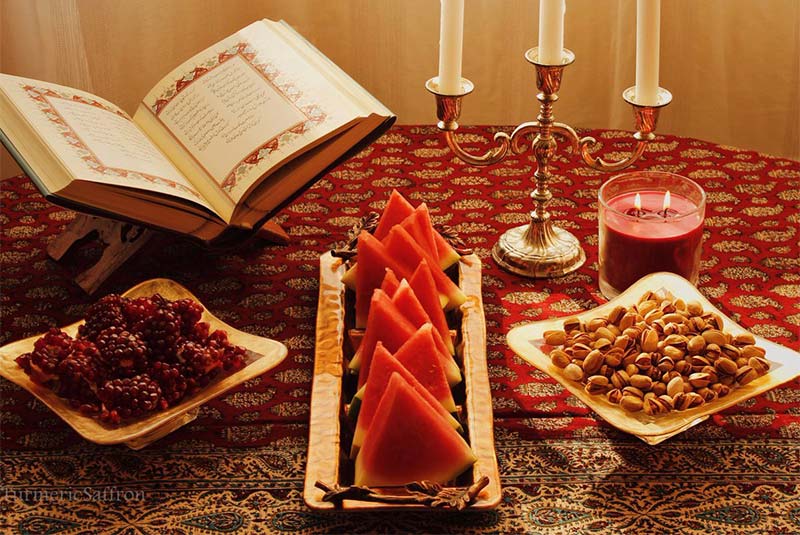 Shabe Chelleh is a night of chatter and laughter till dawn; Iranian families and friends sit together and recall their joyful memories while celebrating the chance of being together under one roof once again, enjoying each others' company.

On this night, friends and family gather happily at their elders' house to pass the year's longest night. Iranians make special arrangements and decorate their homes with a big table with short legs and a vast red blanket covering the whole setting.

There is also a Korsi, meaning a chair, but a massive chair! In the past, the big chair was the solution for cold winter nights in the absence of modern-day equipment. Although not all houses have Korsi nowadays, it is still a tradition to set up one on Yalda night to gather around and enjoy the warmth.

On top of the table, the hosts place different nuts and fruit such as watermelon and pomegranate. Fruits of Shabe Yalda have symbolic meanings. Some believe that watermelon represents the sun because of its spherical shape. Others believe that eating watermelon that night keeps you from being infected by winter diseases and protects you from the devil. In addition, the pomegranate symbolizes birth and the glow of life.

Although different cities in Iran serve different dishes on Shabe Yalda, Each city in Iran celebrates this night by eating its typical traditional food; however, most cities eat Khoreshet Fesenjoon, an Iranian chicken stew, on this night.

In the north of Iran, they serve Sabzi Polo Maahi, a dish of rice and chopped herbs, along with smoked fish or whitefish.

In Shiraz, the special dish of this night is Havij Polo, carrot rice with chicken and Persian roasted saffron, or Kalam Polo, a dish made with rice and cabbage.

The Special Appearance of the Yalda Night Celebration is Red Colour. 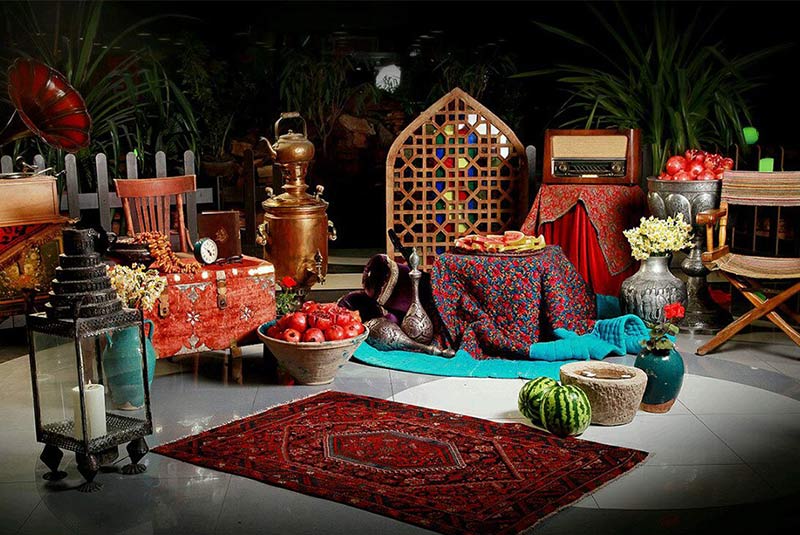 Everything is red, not only the fruits to red, but most guests also wear the colour. Red is considered to be the colour of the crimson hues of dawn and the glow of life.

Shabe Yalda is the festival of the victory of light over darkness. To magnify the importance of light, many candles and light decorations are usually used in gardens and houses on this night. In some places, the festival is held with fireworks.

In ancient Iran, there once lived a goddess named Mithra. Mithra was the goddess of light; Iranians believe she brings warmth to people's lives. Shabe Yalda's celebration is a dedication to her, and the red-coloured fruits and decorations are believed to symbolize the glow of life, invoking the glory of Mithra.

Reading the Enchanting Poems by Hafez 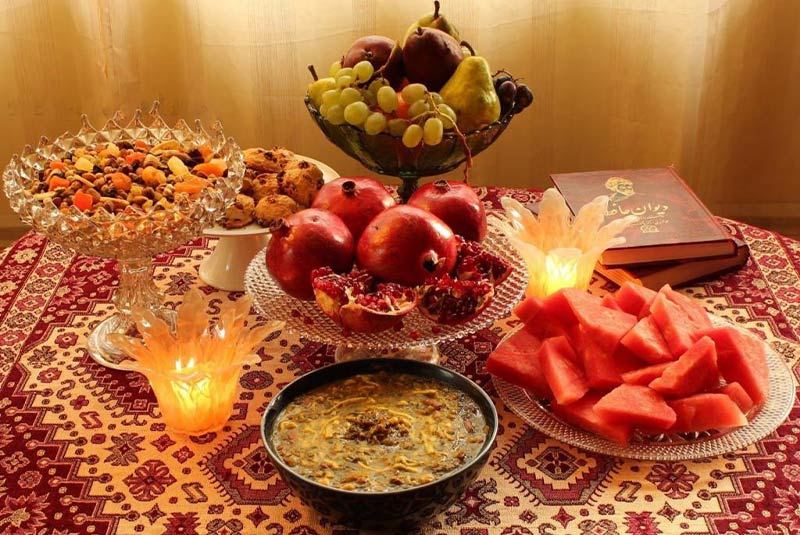 Shams Al-din Mohammad Hafez Shirazi is one of the famous and renowned Iranian poets of the 14th century. Hafiz is highly valued and much loved by Iranians. Almost all Iranians keep a copy of his book of poems called Divane Hafiz in their homes.

You may wonder why Hafez is so much loved and what he does with the celebration of Shabe Chelleh. Most Iranians believe that he answers back if you ask him a question or make a wish from the bottom of your heart.

During Shabeh Chelleh, after everyone has eaten their food, one of the family's elders would do a Hafez Khaani for them. Each of them would ask a question or make a wish and open the Divan-e Hafiz, and the eldest family member read Hafez's answer and interpret it.

Iranian Festivals and Celebrations
Do Iranians Celebrate Christmas?
What is Zoroastrianism Relegion
Traditional Persian Breakfast You Should Try
Remaining characters