The Most Beautiful Waterfalls in Iran

Iran is a great destination for nature lovers. In addition to historical and cultural places to visit, there are plenty of natural places to see. Despite most people think of Iran as a desert country, there are so many different types and climates in the country.

The natural beauty of Iran includes lakes, wetlands, forests, valleys, mountains, caves, islands, springs and waterfalls. Sitting nearby a waterfall and listen to the sound of water dropping from a high mountain is one of the most refreshing and revealing experience. Here, we are going to introduce some of the most beautiful waterfalls in Iran to encourage you visiting them when you travel to Iran. 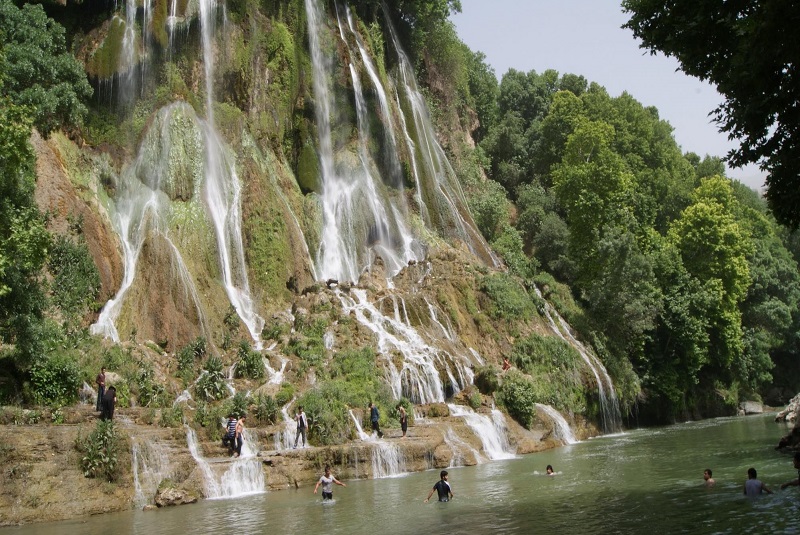 Margoon literally means in "snake-like" in Farsi. The waterfall is situated in the Margoon village, in the western valleys of Sepidan County in Fars Province. It is also 150 kilometers north of Shiraz.

Margoon Waterfall has 70 meters height and 100 meters in width. It is one of the largest and most beautiful waterfalls in Iran. The waterfall is, in fact, the source of the river at the top of the mountain, but from the body of the rocky mountain walls, there are more than a few thousand springs that the water is poured out from them.

Margoon Village has a mountainous neighborhood with an elevation of over 2,200 meters above sea level. Most of the year, the weather is cold, and during the winter the waterfall can eventually freeze in December and January. The weather is mild during the summertime. So, the best time to travel to Margoon Waterfall is during spring and summer.

Laton Waterfall with 105 meters height is the highest waterfall in Iran. The waterfall lies 15 kilometers south of the border town of Astara in Gilan Province. The Laton Waterfall originates from the fabulous Kootah-Koomeh Village and it’s just in the center of a beautiful forest.

The fauna and flora of the neighborhood are absolutely amazing with a great range of different species. Apricot, quince, pear, walnut, hazelnut, wild apple, and plum trees can be seen around the Laton Waterfall in different seasons. The fauna of that area is also noticeable as animals such as wolves, bears, porcupines, and raccoons. 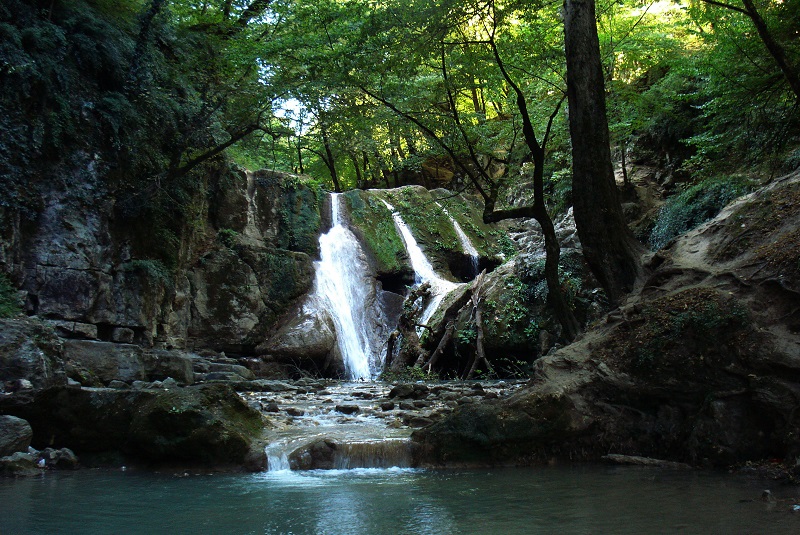 To go to the Laton Waterfall you need to drive about 15 kilometers south of Astara, on the border with Ardabil Province. Then, you should pass along the roads of Londvil City and Kooteh Koomeh Village. At the end of this road, you should trek for about 4 hours in one of the most amazing paths in Iran.

Backpacking and camping are the things you can enjoy, apart from walking. The best time to go is spring and summer; you will be impressed by the pleasant weather beside verdant green trees.

Bisheh waterfall is situated in the heart of Zagros Mountain range, 65 kilometers to the city of Khorramabad in Lorestan Province. Bisheh Waterfall is the forty-eight national monument that was recorded in the list of Iran’s natural heritage by the Cultural Heritage Organization.

It is almost 48 meters high and 10 meters wide. At the top of the waterfall, there are several springs which join together and create the waterfall.

Due to the adjacent of this waterfall with several beautiful complexes such as the vast oak forests, the Bisheh village and the perspective of the railway station of Bisheh, it can be considered as an appropriate tourist area.

Yakhi literally means icy in Farsi, and the waterfall gets its name since it is completely frozen almost all over the year. The waterfall is located in Amol City, in Mazandaran Province, at an elevation of 5,100 meters. This waterfall is 70 meters in height and 3 meters in width.

Shevi Waterfall or as locals call it Tale Zang Waterfall is one of the most beautiful waterfalls in Iran. In Bakhtiari language, Shevi means tenderness.

The waterfall is located in the Zagros Mountains, in Sardash Area of Dezful, in Khuzestan Province. Shevi Waterfall was registered as one of the national monuments of Iran. It is just 10 kilometers from Tale Zang Rail station on Tehran-South Railroad. Taking the train is the easiest way to go to this amazing waterfall. Shevi Waterfall originates from a cave and flows in a high defile downwards. 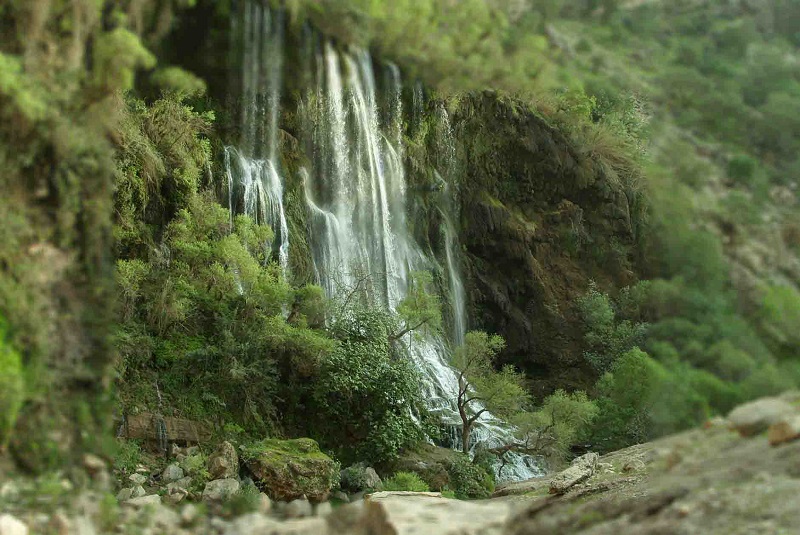 The best time to visit Shevi Waterfall is in spring, especially March, in which the weather is fresh and all the surrounding area is greener than ever.

To reach the Shevi Waterfall, you need to pass through a mountainous road. As you walk through the road, you will hear the sound of the water and will feel that the humidity gets higher. There are terraced pools at the bottom of the waterfall which are great for swimming.

The Nojian Waterfall in the western part of Iran is one of the highest waterfalls in the country with 95 meters height and 5 meters in width. The water comes from the upstream springs and is abundant in springtime. Therefore, the best time to visit Nojian Waterfall is in May, April, and early June. At this time of the year, you will enjoy wondrous scenes on your way to the waterfall.

The waterfall is located at a distance of 51 kilometers in the southeast of Khoramabad City in Lorestan Province.

In 2008, Nojian Waterfall was inscribed on the Natural Heritage list by Cultural Heritage, Handicrafts and Tourism Organization of Iran.

The Kaboud-val Waterfall is the largest full-moss waterfall in Iran. The waterfall is situated in an amazing environment, full of beautiful trees from different species. It is almost 6 meters in height and has one of the coolest and refreshing water. 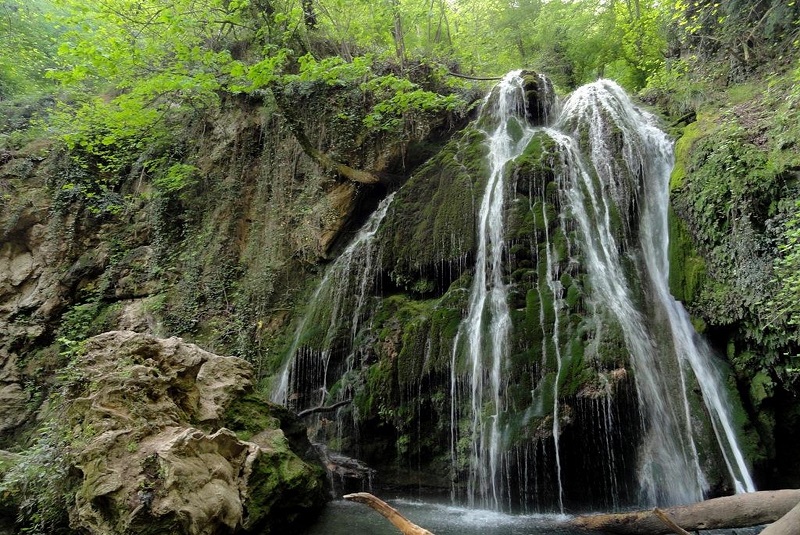 Shahandasht Waterfall is situated deep in the rich nature of Mazandaran Province, 65 kilometers away from Amol. It is the second-highest waterfall in Iran, and the most interesting thing about this waterfall is that water never stops falling from it, even during the cold and breezy winter.

If you are planning to have a visit of Shahandasht Waterfall, it is good to know that there is the magnificent Malek Bahman Fort just nearby it.

The height of Shahandasht Waterfall is about 51 meters, and it consists of 8 smaller ones which pour cascade down beside of Malek Bahman castle. Source of the waterfall is Elias Strait.

The waterfall goes through a tunnel and comes out of the heart of a rocky mountain. With a height of 69 meters, its exit from the mountain is so amazing. It joins the river of Rudbar (Ab Zalaki) in Lorestan and eventually pours into Dez River. 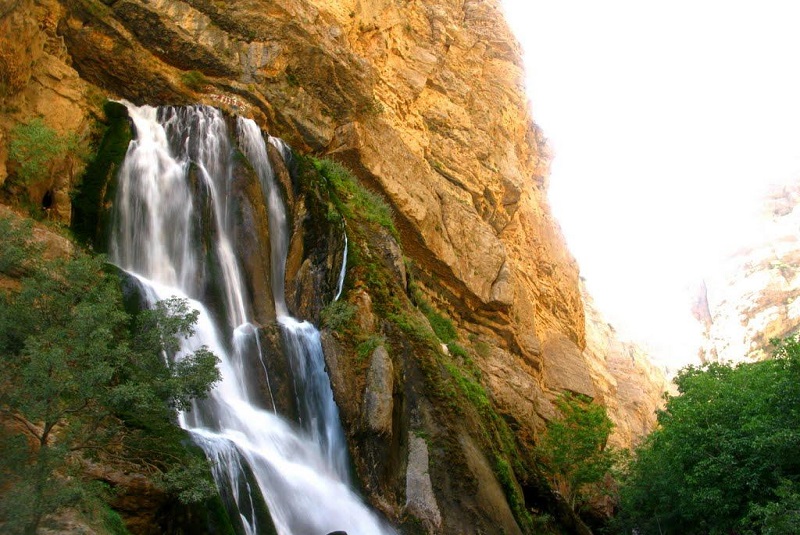 In hot summers, innumerable families pack picnics for a couple of delightful hours in the heart of nature. It might be crowded in peak seasons but is still worthwhile and enjoyable. Families like to settle for a few hours and paddle in cool waters; this is what children love the most, and you will find it difficult to convince them to leave.

Sangan Village is a beautiful and mountainous area in the northwest of Tehran. It is a bit upper than Suluqan Village and has an amazing waterfall. Sangan Waterfall is just outside the village with great access from Tehran through Kan Road.

Sangan Waterfall is unique in its kind. In winter, dripping water creates an ice stalagmite at the base of the waterfall. This stalagmite usually reaches a height of 40 m. Although the ice stalagmite is sometimes climbed, this is generally not recommended due to the danger of falling ice from above.

During the summer months, lack of rainfall can significantly reduce the water flow. The waterfall will obviously be most impressive after heavy rains in spring and autumn.

Semirom Waterfall is known as the beautiful bride of the Zagros Mountains. The waterfall is situated 4 kilometers east of the Semirom city and 160 kilometers south of Isfahan. As a result of its beautiful and mountainous neighborhood, Semirom region is considered as one of the most privileged areas for nature lovers.