Temple of Anahita; the Historic Monument of Kangavar

On the road traveling from Tehran toward the city of Kermanshah "Bakhtaran," one passes through the valley of Asad-Abad. In the small town of Kangavar located at the distance of about 75 km from Hamadan and 96 km from Kermanshah, ruins of a majestic historic site start to appear right by the roadside.

The famous structure of the Temple of Anahita built on a rock platform overlooking the plain of Kangavar, which is a huge building, and the second largest stone monument in Iran. Anahita is the name of the goddess of the planet Venus, who seems to have been worshipped by the Medes and Persians before they adopted Zoroastrianism.

The history of the Temple of Anahita

According to historical evidence, in about 200 B.C., during the Seleucid Greek occupation of Kangavar, a major sanctuary was erected to the mother goddess Anahita – who was worshipped in ancient Persia along with Ahura Mazda and Mithras. This vast temple was built of enormous blocks of dressed stone with an imposing entrance of opposed staircases which may have been inspired by the Apadana at Persepolis

One of the early references to such temple is by Isidore of Charax who reports that in the Parthian territory, Ecbatana, the greatest metropolis of Media, retained a temple of Anahita where sacrifices were regularly offered. At Concobar (Kangavar) in lower Media, a temple of "Artemis" built about 200 B.C., was standing when Isidore of Charax wrote, and some vestiges of this Greek-style edifice survive today. 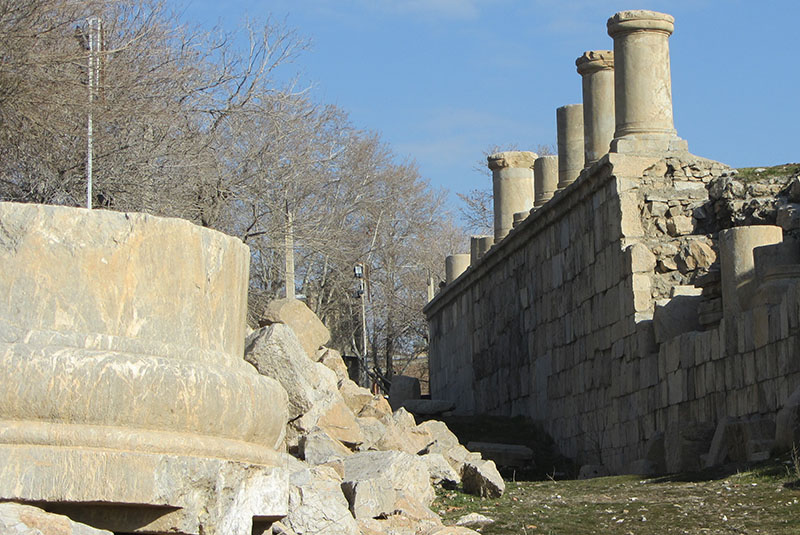 The goddess’ temple was built by Ardeshir II also known as Artaxerxes II who ruled from 404 -359 BCE.

The Arab geographer Yaqut wrote of Kangavar in 1220; he says the place was the haunt of bandits, locally called either Qasr-i Shirin, 'castle of Shirin' after Khosro's favorite wife, or more often Qasr al-Lasus, the 'Robber Castle'. He wrote: "The Robber Castle is a very remarkable monument, and there is a platform some twenty cubits above the ground and on it, there are vast portals, palaces, and pavilions, remarkable for their solidity and their beauty."

In the nineteenth century, various Europeans investigated the ruins. Ker Porter in 1818 found them to form the foundations of a single huge platform - a rectangular terrace three hundred yards square, crowned with a colonnade.

The Architecture of Temple of Anahita

The architecture of this temple coincides with palaces and temples built during the Achaemenian period, 550 BC to 330 BC, in western Iran. Large pieces of stone are cut and shaped into blocks of rock. They are placed on top of each other; their shape usually causes them to interlock to form a wall or platform by a mountainside.

The monument has a two-sided stairway on its southern front and a one-sided stairway at its northeastern corner. Historical sources and archaeological evidence attribute this monument to the Achaemenid period until the Islamic period.