Saffron is one of Iran’s non-oil exports. Although it’s grown in only a few provinces throughout the country, it’s easy to find it in the various spice markets. Persian Saffron; the Red-Gold ingredient grows from late October to mid-November, early in the morning before the sunlight women harvest the flowers before they bloom, so the stigma (which is the actual Saffron) is out of any dust. Once the flowers picked, they start the process of separating the purple stigma from the purple crocus flower.

Later, the drying process starts by sun-dried, or by the machine to ensure no dust come into contact with Saffron. The process, however, is completely dependent on the weather. If the weather become cold earlier that year they have to start the harvest as soon as possible.

In this article we are going to give you more information about this red-gold ingredient and different types of it. So you have enough information when you want to buy some at any local market.

Saffron is from the flower of “Crocus sativus”, known as the "saffron crocus". The flower is originally growing in Eurasia countries and was later brought to parts of North Africa, North America, and Oceania. 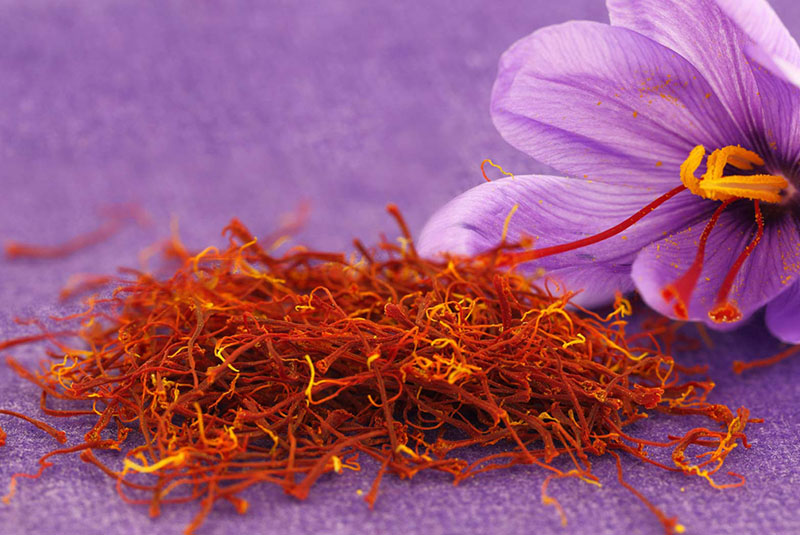 Saffron's taste results from two chemicals called picrocrocin and safranal. The golden-yellow color is because of carotenoid pigment.

Iran is known for the best quality Saffron in the world. However, you should always remember that there are different kinds of Saffron with four main types, each with different quality. These four types are Sargol, Super Negin, Negin, and Poshal.

1. Sargol: In Farsi it literally means "Top of the flower" which derives from the very tip of the saffron thread. It has a specific, powerful aroma more than other types. It is also known as high quality since it does not contain any Yellow or Orange threads. However, during the harvest, and separation process, Sargol saffron often contains crumbs and broken threads.

3. Negin: This type of Saffron is longer in length but contains some yellow and orange portions. However, the aroma, quality, and purity are still great but the color is not perfect due to some portions of yellow and orange threads, which makes this type less quality than others.

4. Poshal: The cheapest and least quality type of Saffron is known as Poshal. This Saffron is from yellow parts of the stigma which contains no value, taste, and aroma.

To conclude, as long as Persian Saffron known as one of the best quality products, it should always be bought from a reputable and trusted source.

Saffron is widely used in Iran, India, European Countries, and Arab cuisines due to its great taste, and color. It is also used in confectioneries and drinks.

Saffron has a long history of use in traditional medicine. It is known as a remedy for asthma, cough, whooping cough, and to loosen phlegm. It is also used for sleep problems (insomnia), depression, Alzheimer’s disease, fright, shock, spitting up blood (hemoptysis), pain, heartburn, and dry skin.

Saffron has also been used as a fabric dye, particularly in China and India. In India, it is also used for religious purposes.

In comparison to other spices or dried foods, the nutrient content of dried saffron shows the richness of nutritional value across B vitamins and manganese.