Iran is a vast country with different climates, natural landscapes, and geographical variations in every part of the country.

The same as any other country worldwide, inhabitants in Iran separated into cities or rural life. According to the latest researches in 2017, about 75% of Iranian lives in the cities and the rest of the 25% live in the villages. To be more familiar with the Iranian who chose rural lives against living in the cities, we are going to rural housing in the country. 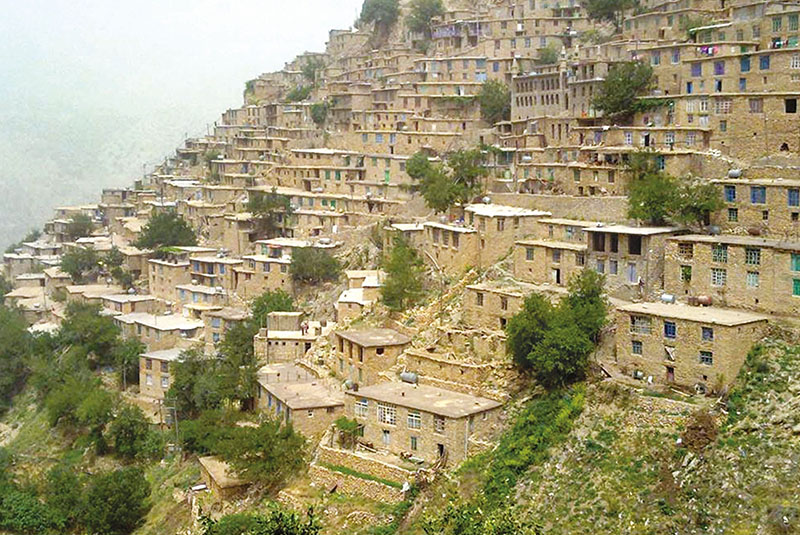 Generally speaking, by considering the history of housing it is known that housing is a social, cultural, economic, and structural phenomenon which provides livelihood conditions. These items, lead us to four common patterns with quite distinctive features:

1. Northern areas alongside the Caspian Sea

3. Central Iran (areas bordering with the Dasht-e Kavir and the Persian Gulf)

4. The Persian Gulf and Sea of Oman in the south

1. Northern areas alongside the Caspian Sea

These areas have a fertile soil for farming and plenty of water, therefore, villages have a scattered pattern. There are citrus trees all around the residential districts. People this area make their living by farming, gardening, and fishing. Houses used to build with wood, clay, and straw. Ceilings were also covered with Sufal which is the same as tile but from baked clay.

In these areas, houses are usually two-stories building with a drawing-room the second floor for entertaining visitors. In these types of houses, the first floor usually used as a place for keeping livestock, stable, kitchen, while, the second floor is designed for living.

3. Central Iran (areas bordering with the Dasht-e Kavir and the Persian Gulf)

Central Iran is a district with an arid salt desert and harsh nature. The average precipitation in this area is less than 200 mm on an annual basis and living totally depends on Qanats and springs. In these areas, houses are built mainly with clay and sun-dried clay, very close to each other in a dense context.

4. The Persian Gulf and Sea of Oman in the south

Living in these areas are based on fishing, cultivating palm and citrus trees, transportation of goods to the countries of the Persian Gulf. Due to the hot and humid weather, villages and houses have scattered textures so that coast breezes will easily flow the atmosphere.

As a result of this condition, houses have windows on both sides of the house. They also have a wind-catchers to maximize their benefit from the breezes.