Ta’ziye is a ritual dramatic art among Iranian traditions which recounts the religious and historical events and mythical stories and folktales.

It is originated in ancient Iranian ritual practices and is based on myths and historical events.

Every Ta’ziye is a demonstration of the battle between a celestial group and a devilish one which symbolizes the right and wrong. Each performance has four elements: poetry, music, song and motion. The dramas are symbolic, full of codes and signs which are understood by Iranian spectators.

Ta’ziye mostly narrates the religious events which have happened during the history. The Shia Muslims repeat and imitate the behaviours and practices of their ancestors as if they have occurred at present. One of the most important and popular Ta’ziye dramas among the Shia Muslims is the events of Karbala which demonstrate the battle between Imam Hossein (the third Imams of Shia) and his enemies.

Every Ta’ziye has its own subject, characters, costumes and music. The characters are divided into three groups: the holy successors, the evil people and the middle ones. The costumes of the characters are different in color and design. A lot of tools are used in Ta’ziye such as sward, dagger, shield, beam and bow, spear, helmet, armor, boot, claw, chain, flag, horse, camel and so on. 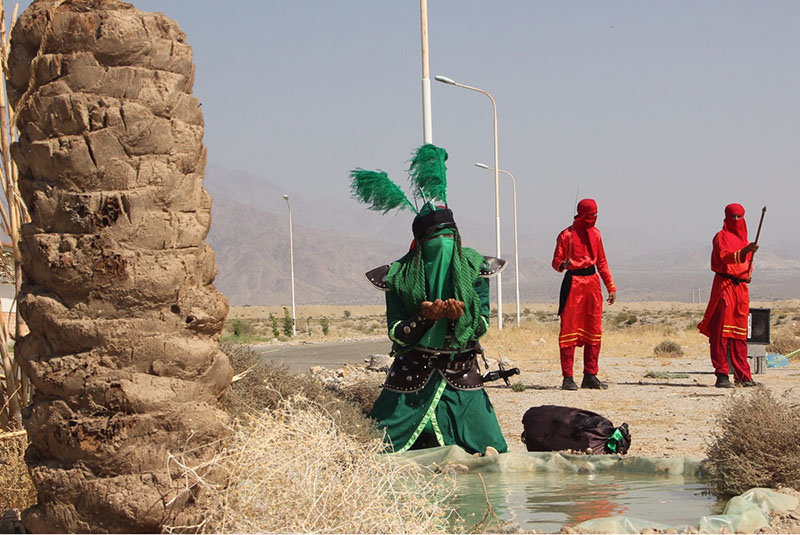 We cannot ignore the role of music in Ta’ziye. Since the beginning of this art in the form of a musical show, its main framework of music has been based on the radif of Iranian music.

Before using dramatic techniques in Ta’ziye, its themes were expressed in poetry and singing. The first performers of Ta’ziye were the artists who sang very well.  The awareness of these artists about the radif of Iranian music and the continuous use of it in Ta'ziye formed the identity and the structure of the music of this art.

The place of the performance is also significant. It is usually in tekyeh, hosseinieh or the squares. The place should be in the circle or square form that spectators could easily watch the stage.

The literature in Ta’ziye has its own features. The dialects are in poetry and full of simile, metaphor, and irony. Boasting, chanting, talking with themselves, singing together, praying at the end of the performance, are different kinds of speech in Ta’ziye.

This art is transmitted from generation to generation (from tutor to pupil) and was registered as a world intangible heritage in UNESCO in 2010.