One of the most remote places in Iran which have not been discovered by many international tourists is Tabas. The city is located at the heart of the desert, amazingly with beautiful date and citrus gardens

to the historical evidence, the city used to be several times larger than its current area and during the centuries some parts of it were separated and joined other areas. Here, we are going to talk about the city of Tabas and best places to visit when you travel to this beautiful city.

People and population of Tabas

According to the 2016 census, its population was approximately 40,000 people in 10,000 families. The people of Tabas speak with a Khorasani dialect of Persian that sounds somewhat different from the standard Iranian version. 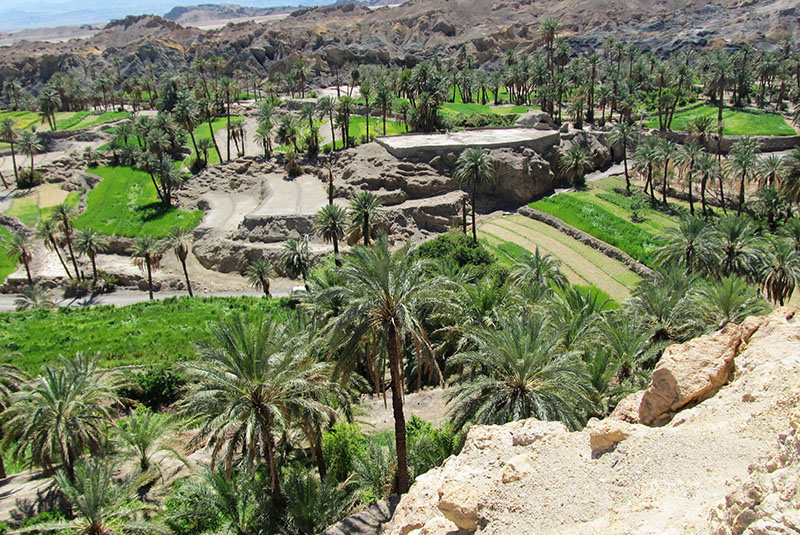 Tabas has a desert climate, and virtually there is no rainfall. The average annual temperature in the city is about 21°C. Summers are long, sweltering, arid, and clear, while winters are cold, dry, and mostly clear. The average rainfall on an annual basis is 77 mm.

The best time to visit Tabas is from mid-April to late May and also from late August to early October.

The history of Tabas dates back to pre-Islamic times, in which the city was an important outpost of the Sassanid Empire. During the Arab invasion it was considered the gateway to Khorasan, and later it was spared when the Mongols attacked the country.

The 1978 Tabas earthquake with 7.4 on the moment magnitude scale affected the city with a maximum Mercalli intensity of IX (Violent), and unfortunately, at least 15,000 people were killed. Since then, the city has been rebuilt with many new streets, parks and public buildings.

There are a number of date and citrus gardens in the city where you can spend a few hours relaxing and enjoy the peace and silence, especially during the spring when you can smell the fragrance of citrus blossom. In addition, Morteza Ali Canyon, Golshan Garden, Nay Band Village, and Kal-e Jeni are the most visited places in the area. In the following, we are going to introduce these places briefly.

At Kale’ Sar Dar valley, around Kharv village, there are a number of small and big springs with some cavities and channels, which is believed that dates back to Sassanid Dynasty (early 3rd century AD until 651). 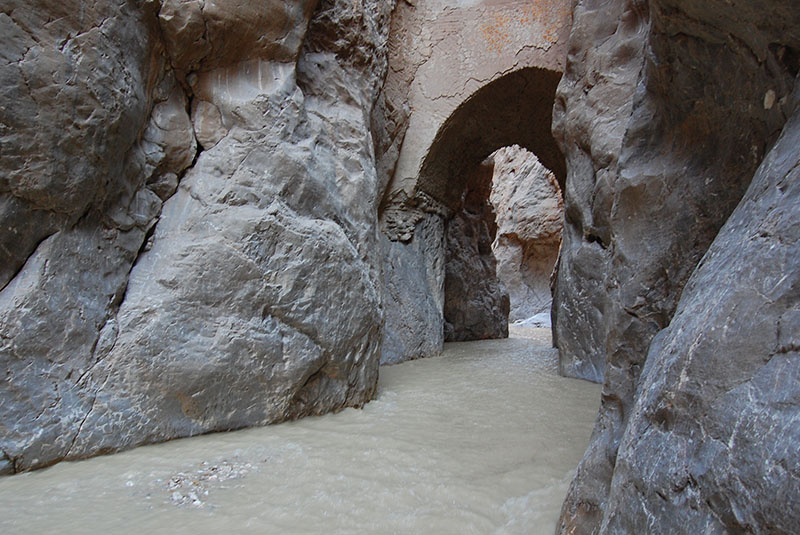 Walking along the stream of water for about one hour brings you to the biggest one which is flowing from a cavity, names called Morteza-Ali Canyon. If you continue walking through the spring, you will notice that the valley is getting narrow and the small springs flow into the valley. The interesting point about this canyon is the structural difference with the running water at the riverbed lead to a flow of about 300 meters of the riverbed, while they are not completely mixed together, hot water flows to the river from the right side, and cold water of the river flows to the river from the left side.

Continuing the way we encounter Shah-Abbasi Dam (Tagh-e-Shah-Abbasi) with 60 meters height which is known as the highest historical buildings in Iran!

It is believed that the garden goes back to the Zand and Qajar dynasties about 300 hundred years ago, and was constructed by order of Mirza Hassan Khan who was the third appointed governor of Tabas by Nader Shah Afshar at Afshariyeh era.

The garden covers an area of 8 hectares, and currently used as a public park. The garden has been constructed and developed in compliance with Iranian garden architecture, with two crossed water streams. At the center point of this garden, there is a pond where habitat of a number of birds, including two beautiful pelicans. In addition, there is also an eight-acre monument with different fruit trees in each.

Nay Band Village has a unique architecture, and all houses are constructed in a vertical line where the roofs of lower houses are used as the yard of the upper houses. In addition, roofs of the houses in Nay Band are made of wood and a special type of soil; consequently, in summer people feel cool in the houses. Also, if an earthquake happens, less destruction would take place.

People of Nay Band village are engaged in farming and animal husbandry because of the subterranean canals, known as “qanat” in Persian, and sprigs. Although the population of this village has decreased, there are building constructions, showing the expansion of Nay Band village.

Kal-e Jeni canyon is shaped by water movement and erosion during centuries. There is a canal to a village called Tashkuni which carries the water of Kal-e Jeni canyon. People believe this is where Cyrus the Great has spent 16 years of his life. 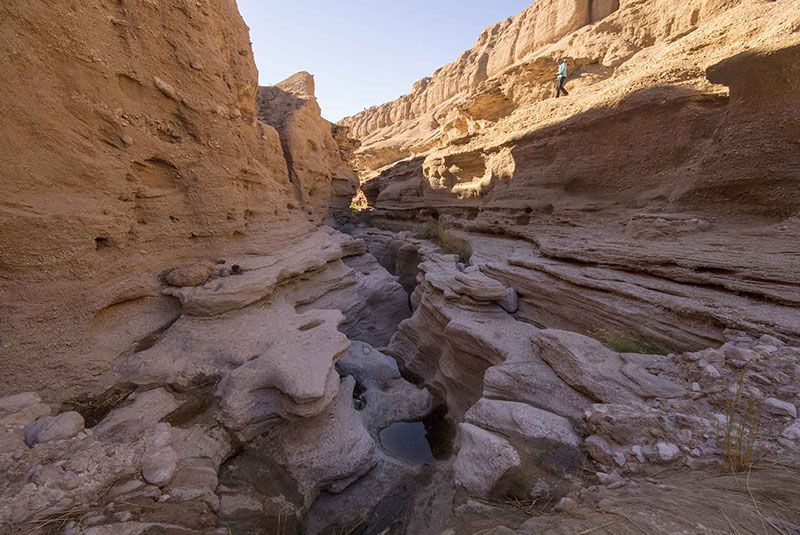 The name means canal of Jinn! Historians believe there are some reasons for this naming. First is the mysterious looking columns, walls, and arcs in this valley. The second reason is locals’ belief, they believe this place was the house of aliens. The other reason is that there are rooms carved into the walls of the valley which their real function is not found yet. However, the historians believed that the followers of Mithraism used these rooms to hold their Cheleh (the ceremony in which they isolate themselves for forty nights in one place) in them.

As locals think this is a cryptic place, Kale Jenni canyon has not been visited by many tourists during the past decades. But now people have understood that it is one of the astonishing places offered by Mother Nature. So many visitors decide to visit here each year.