Saddam wanted to turn the Iran-Iraq war into a Persian-Arab war.

Carl von Clausewitz, one of the most influential philosophers of war and a soldier of the Prussian army in the 19th century, while emphasizing the political nature of wars, considers three important motives involved in their occurrence: hatred, accident, and politics. But after the start of the war, this phenomenon is the art of thinking about how to use military forces to impose the political opinion on the enemy and, at the same time, destroy him, which also indicates the purpose of the war.

With Saddam's invasion of Iran in September 1980, one of the longest and bloodiest wars in the modern history of the Middle East began. In fact, he thought that the Islamic revolution was a threat against him that he could not deal with using diplomacy. Meanwhile, Iran had become very vulnerable after the overthrow of the Shah. It seems that these reasons caused Saddam to use his military force. Of course, his military goals were limited. By doing this, he ignited the nationalism of the Iranian people and, as a result, started an eight-year war that was far beyond Iraq's means. For those interested, we will discuss the reasons for the war in detail later.

Having gained experience from the war with Israel and seeing the conditions of the war with Iran as suitable, Saddam decided to attack Iran. 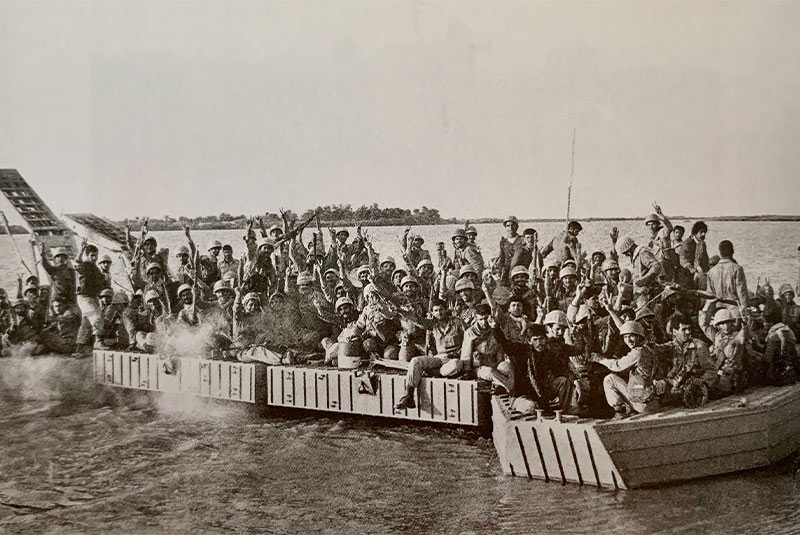 Before the large-scale attack of the Iraqi army on Iranian soil, the conflicts were going on along the borders of the two countries for fourteen months. A few weeks before the start of Saddam's attack, the Iraqis captured the border areas of Zain al-Qaws and Saïf Saad (Kūh Mī Mak region in the western part of Ilam province) on September 7 and 10, respectively, and dominated five border posts from September 10 to 13, and thus, they intensified the conflicts.

It is worth noting that Iran did not show a robust military response to these actions of Iraq until the Iraqi attack on Iran actually began on September 22. Considering that Iran did not react to the seizure of two districts and five border posts between September 7 and 13, it indicates Iran was against the start of the war. However, Iraq ignited the national feelings of Iranians in the next attack, which was a decisive battle with complete equipment. The main attack was carried out by three armored divisions and two mechanized divisions from the direction of Basra and they advanced almost a hundred kilometers without stopping. Meanwhile, at the same time as this attack, Iraqi forces also besieged the cities of Abadan and Khorramshahr (two cities in Khuzestan Province, Iran). 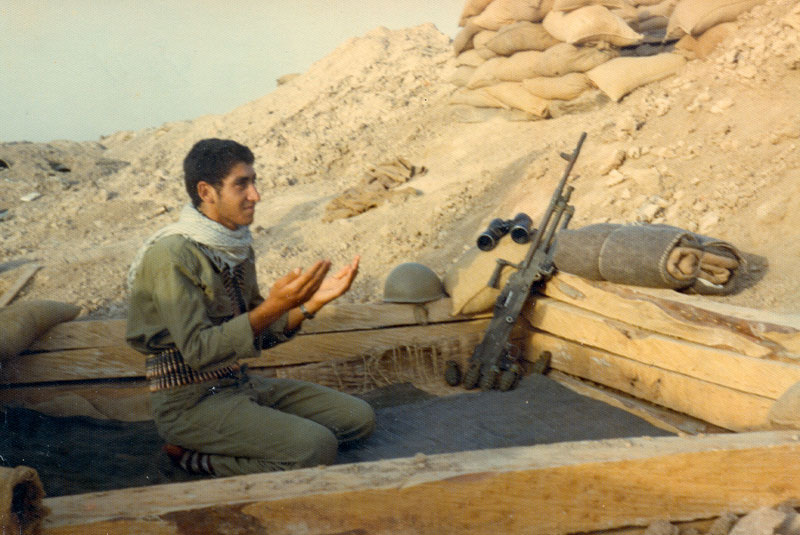 After the siege of the cities of Abadan and Khorramshahr, Iraqi forces reached near Ahvaz, which was on the southern front of the Iraqi invasion. In the middle front, they occupied Mehran (a city in Ilam Province, Iran) and almost reached the Zagros mountains. On the northern front, they captured large areas of Iranian soil near Qasr-e Shirin (a city in Kermanshah Province, Iran).

In the afternoon of September 22, 1980, Khorramshahr came under heavy fire from the Iraqi army. The large fire of mortars and cannons of the enemy rained on the city had taken everyone by surprise. The town was on fire and the sound of the explosion did not stop for a moment. It didn't take long for the hospitals to be filled with wounded and martyrs. The deserts and roads displaced women, children, and the elderly. People, especially the youth, came to the Jame Mosque (the symbol of resistance) and other bases to organize for resistance.

Resistance groups quickly formed and began to attack, fight and flee. The Iraqi forces used artillery, tanks, mortars, heavy machine guns, and armored forces, and the Iranians only had a few M-1, J-3 rifles, incendiary bottles, and a few RPGs. 34 days of resistance and effort in these conditions, although many city defenders were martyred, Iraq failed to reach its goals and quickly occupied Khuzestan. Nevertheless, Khorramshahr became a bloody city and fell into the hands of the enemy. 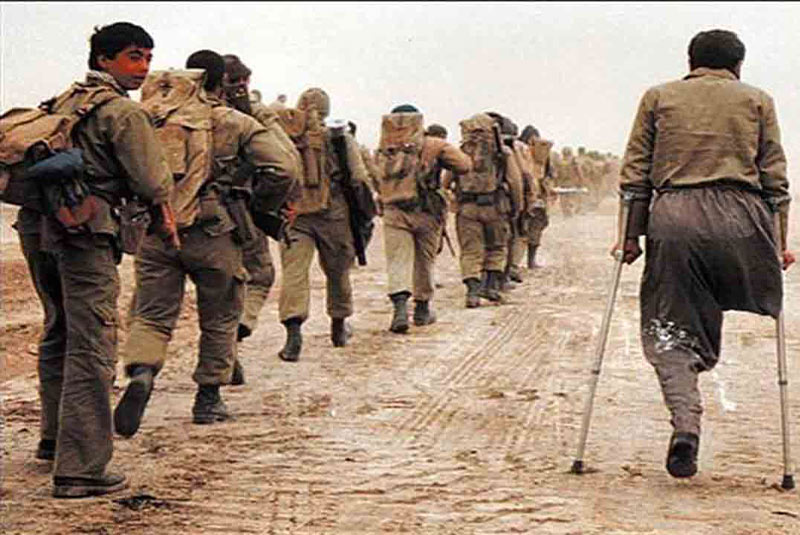 On October 26, 1980, Khorramshahr city in Khuzestan province was completely occupied by the Iraqi army after more than a month of resistance by Iranian fighters and local forces. It was midnight on October 25 when the Iraqi army forces organized and equipped the forces stationed on the Khorramshahr front and called fresh troops to this front. It launched a massive attack on the city, and after an unequal battle, they entered the streets of Khorramshahr. The fighters and the people of the town around Khorramshahr Bridge, which was now known as Bloody City, made great efforts to prevent the advance of Saddam's forces. However, finally, on the evening of October 26, the west of Khorramshahr fell into the hands of the enemy, and the bitter tragedy of Bloody City took place. The rest of the defenders retreated to the city's East, but with all their persistence, Khorramshahr finally fell and was completely occupied by the invading enemy. However, this did not mean the end of the conflicts, as Iranian fighters were still engaged on the eastern front with the invading forces.

Although Khorramshahr fell on October 26, 1980, and the Iraqis continued their aggression, in addition to the complete looting of the city, they did not spare even the houses of Khorramshahr and completely destroyed some of them with 300 tons of TNT. However, the resistance of the people and warriors continued until 20 months later. 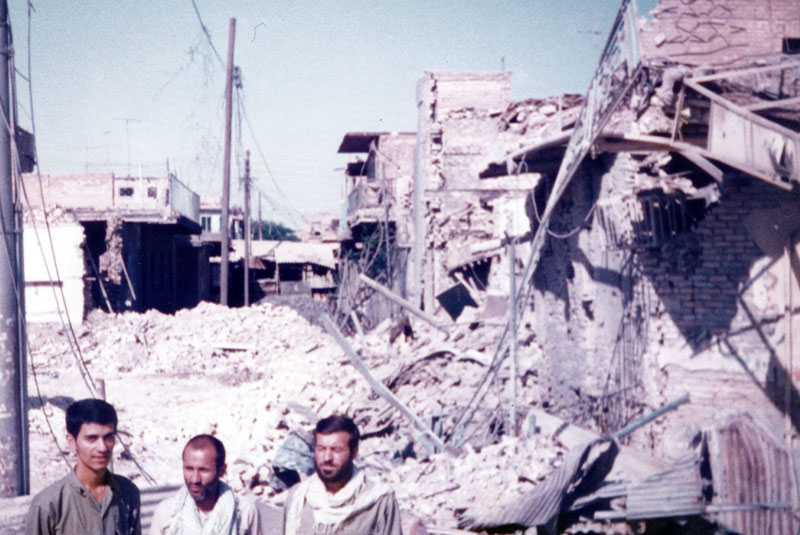 After occupying Khorramshahr, the Iraqi army tried to enter the Abadan peninsula by passing through the East of Karun and the north of Bahmanshir (the name of one of the branches of Karun River in Khuzestan province). To achieve this goal, on October 30, 1980, they built a floating bridge over the Bahmanshir river so that they could stay away from the sight of the Iranian warriors and easily enter the city of Abadan by using the cover of palm trees and reeds. However, this time they were forced to retreat from Bahmanshir due to people's resistance.

In October 1980, Iraqi forces attempted to capture Abadan again, and a week later, they tightened the siege ring; all land routes to Abadan were cut off so that the only way to reach this city was by air and sea.

Saddam's failure to foresee the nature of the war and his poor strategy in the battle led to the continuation of the war in the summer of 1981. During this period, Iran found the opportunity to mobilize its extensive reserve forces and push Iraq back from Iran's territory to Basra. 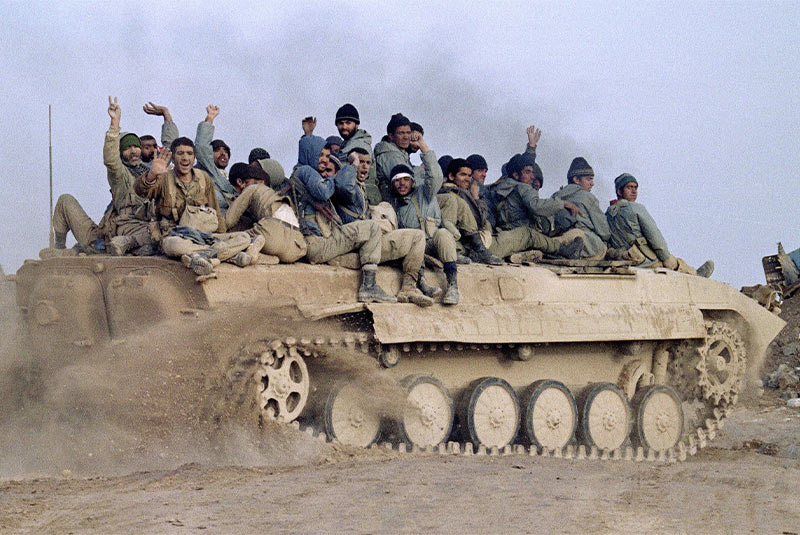 After many investigations and several preparatory operations, the "Bait al-Maqdis" operation began in the west of the Karun River, southwest of Ahvaz, and north of Khorramshahr on April 30, 1982. In contrast, the sensitivity and importance of Iran's and Iraq's goals in this region caused the operation last for 25 days. Finally, Iranian warriors liberated Khorramshahr while fighting in very harsh weather conditions. 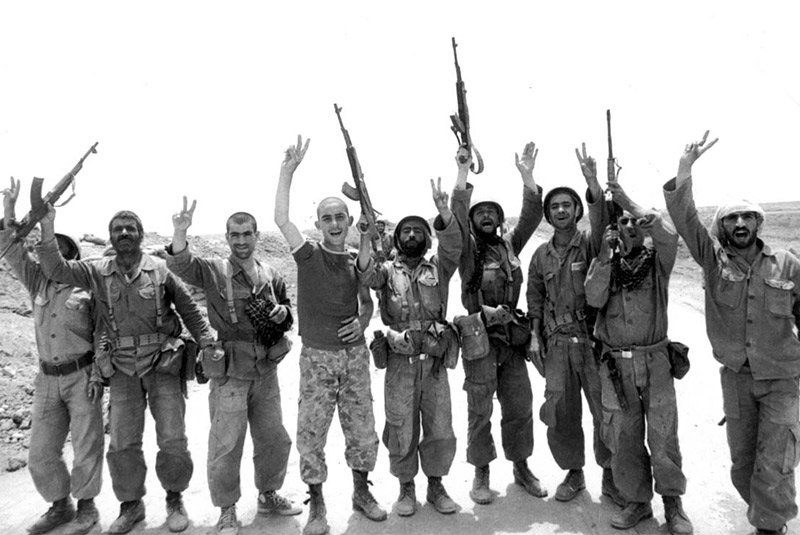 The operation to break the siege of Abadan began at one o'clock in the morning on September 27, 1981, local time, and it was successfully implemented during the 42-hour battle between the army, the Revolutionary Guards, and the local forces. 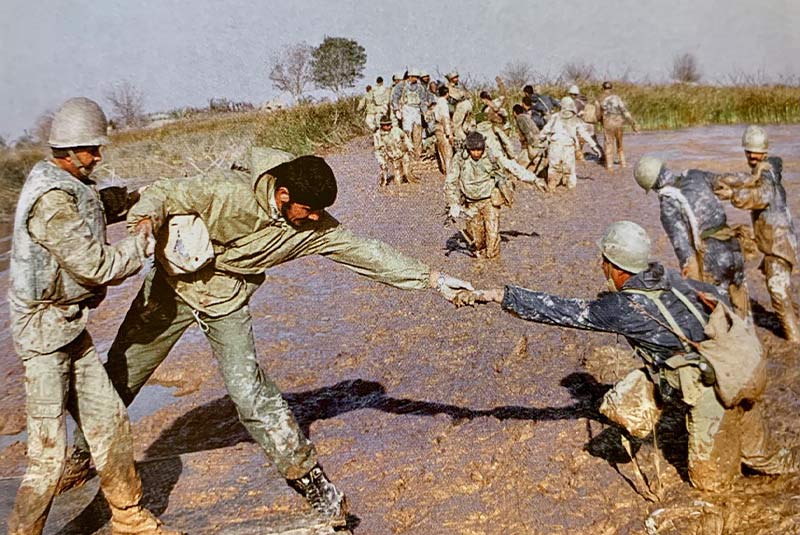 When Iran launched its attack east of Basra, it showed Saddam that it had reached the highest level of readiness. In the late spring of 1988, Saddam began new battles to end the war. He targeted the cities of Tehran, Isfahan, and Qom with a missile attack. The Iraqis attacked from land and sea to destroy Iranian forces, and by using chemical attacks, they were able to take the power of mobility from Iran's defense equipment. They could also advance 40 miles inside Iran in the final battle using coordinated, concentrated, and combined military measures. When Saddam realized this advance had exceeded his goals, he felt threatened again and withdrew his army.

At the strategic level, Saddam was able to simultaneously attack civilians, economic warfare, and practical ground attack alongside diplomatic measures, and he accepted UN Security Council Resolution 598 to return to internationally recognized borders; thus, in the last stage of the war, Iran accepted the ceasefire resolution on August 20, 1988.

IV. Causes of the Iran-Iraq War 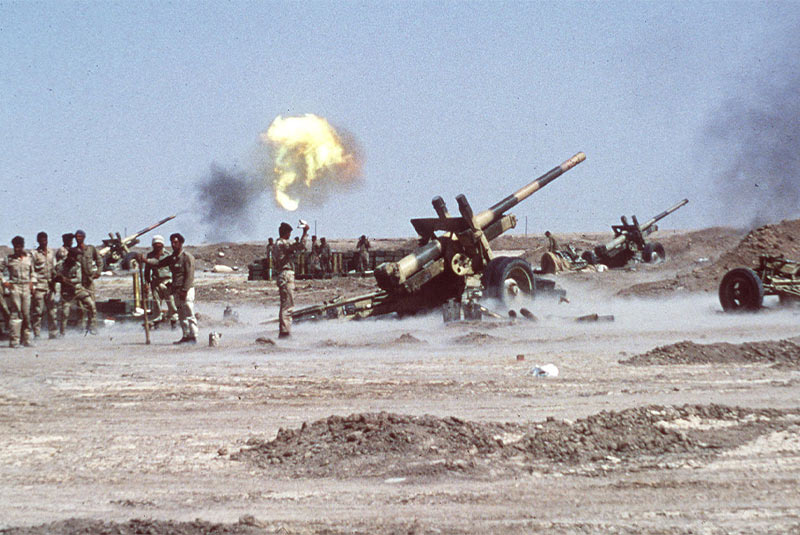 The factors of geography and geopolitics play an undeniable role in the occurrence of wars. Iran has always been affected by this feature due to its geopolitical position. Throughout history, Iran has been invaded and attacked by neighboring countries, which has sometimes been a bridge between the civilization of East and West and sometimes a crossing point for the primitive tribes of the East. The attacks have always caused heavy human and financial losses for this land. They have been an obstacle to forming the economic, social, and cultural infrastructures necessary to develop powerful governments. Due to Iran's geopolitical characteristics, it has been the target of the expansionism of its neighboring countries several times in the new era.

Furthermore, Khuzestan province is of great importance among other regions of the country in terms of geopolitical location, abundant oil resources, good agricultural lands, and ethnic background among different areas of the country. Arvandroud, the only navigable river in Iran, is this province's most vital economic artery, and the economic life of cities such as Khorramshahr and Abadan - among the essential export ports of Iran - is mainly dependent on this river. On the other hand, a large part of Iran's oil resources is located in this province, which is very important for this country.

It is worth mentioning that in the general review of the causes of the Iran-Iraq war, there are several cases, the most important of which are briefly discussed here:

Iran never launched an attack to overthrow Saddam; although, in 1982, it carried out a large-scale strategic attack against Iraq; after a long strategic stalemate, finally, in 1988, Iraq pushed back Iranian forces using military maneuvers and the use of nerve gas.

In the end, Iran accepted the ceasefire, Iraq maintained sovereignty over a part of the Shatt al-Arab, and Saddam remained in power. A few years later, in 1990, Saddam started a war in Kuwait.

Most of the soldiers in this war were just ordinary people, and they were just trying to defend their homes, family, and country. It is noteworthy that most of the people who live along the borders are relatives and friends of each other, and their languages are the same as well, for instance, the language of the people of Khuzestan is Arabic like the people of Iraq and they can also speak Persian like Iranians. Governments never think of their own people when they decide to start a war, even though the people will suffer the most. Therefore, in wartime, the only thing they can do is defend themselves and their property.