Many tourists often overlook Hormuz Island, but it is one of the most beautiful Islands in Iran.

It is also among the most colourful and magical islands in the Middle East and worldwide.The unique Island of Hormuz is nicknamed the "Rainbow Island of Iran" thanks to its different shades and hues of red, yellow, pink, ochre, orange, green, white, brown, beige, gold, grey, and turquoise colours. Hormuz Island is also famous for the bewildering reddish hue of its sea, which is due to the high concentration of iron oxides.

Why is Hormuz Island Red?

Hormuz island is famous precisely because of the red colour of its landscape and the water: the Red Beach. The soil of Hormuz has a high concentration of iron oxide that gives the landscape a characteristic reddish hue.

Hormuz Island is located in the Hormozgan Province of Iran and has seven thousand inhabitants. Hormuz island is surrounded by a beautiful coastal road that opens up to a view of an extraordinary landscape composed of sedimentary rocks and volcanic materials of a thousand colours. Hormuz Island's temperature reaches up to 113°F and 95% humidity during the summer, while it maintains a calm and pleasant temperature in autumn and winter. Hormuz Island also has a unique culture and hospitable people. Life is simple and fascinating on the island. The locals use Hormuz island's red soil for cooking and only use tuk-tuks (rickshaws) and motorbikes to get around the island.

Visiting Hormuz Island is a must for travellers wanting to get off the beaten path in Iran. Extraordinary and mindblowing landscapes and untouched nature are magnificent features of this beautiful island. This tiny island is unique for its peculiarly red beach and colourful soil. Hormuz island allows you to explore many natural and unique tourist attractions and walk on its colourful beaches as the soil colour around you changes.

You can also camp on the beach and enjoy many traditional entertainments, experience the locals' lifestyles, traditions, and clothing, and taste the local dishes of the south of Iran. Regardless, Read on to discover some tourist spots and hidden gems throughout Hormuz island that can be covered in a 4 hour tuk-tuk ride: 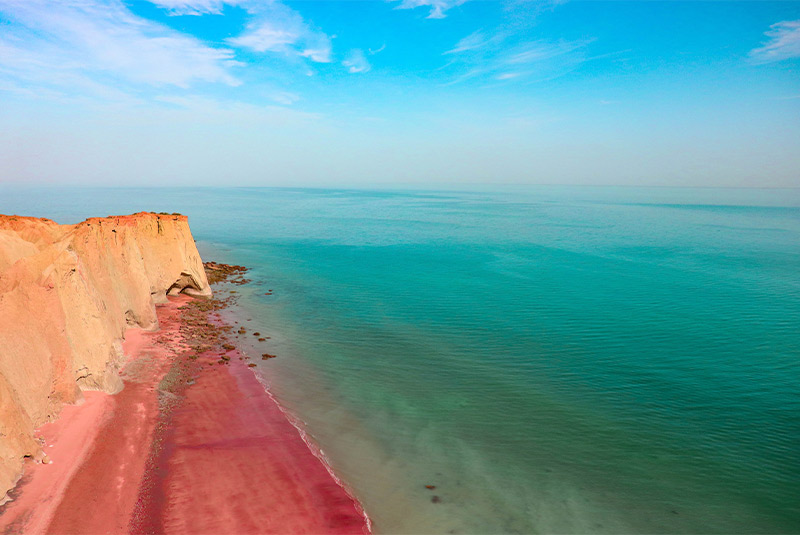 The Red Beach is one of the unique beaches in the world and is among Hormuz Island's tourist attractions. It is a mysterious beach shimmering silvery-black sand, and that's why it is sometimes referred to as the "Silver beach". Its sand is shining and glittering, and the inexplicable reddish hue of its sea makes people call it the blood beach. Many people associate superstitious beliefs with the beach, including the apocalypse and the world's end. Some even believe that the coast was bathed in blood, but the actual cause of the characteristic colour of the red soil is due to the presence of high iron oxide concentration.

The iron oxide in Hormuz's red beach soil also has a high economic value. It has been exported for several years to different countries for use in various industries such as dyeing, fabrics, cosmetics, food colouring and glass and ceramics. The locals also use it for baking a local bread called "tomshi". The Red sand and bright red waters make this beach pretty and magical. You will love walking across the beach and witnessing the sand's colour change from black to red and back again. 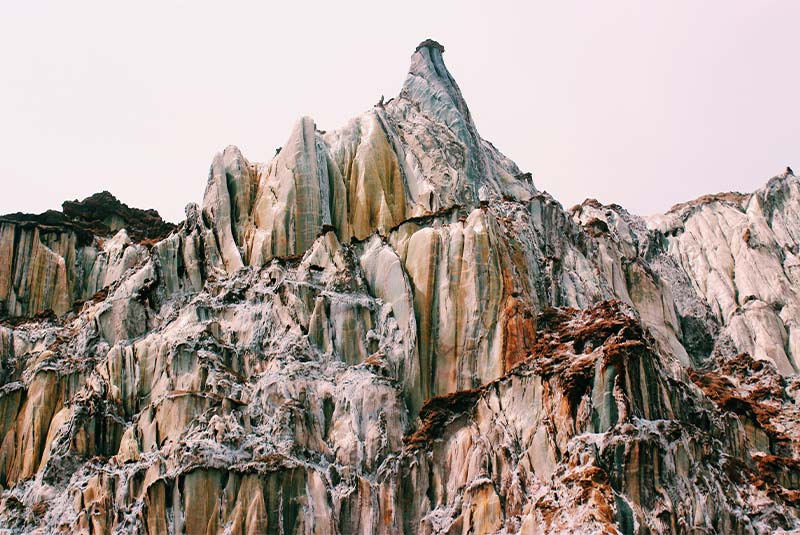 Visiting the rainbow valley is every geologist's dream. The valley is also an inspiration for artists and nature enthusiasts. It is an excellent place to see the beautiful canvas of numerous hues of Hormuz island. The valley has different hues of yellows and greens layered with red, purples and whites, giving the valley a rainbow appearance. The different colours make up a stellar landscape no visitor of Hormuz wishes to miss.

The valley has different colours due to layers of volcanic rock laid out unevenly while cooling. The best time to visit this valley is in the late afternoon when you can spend time hiking the narrow valley and taking nice pictures of yourself on this awesomely photogenic natural site.

3. Valley Of The Statues 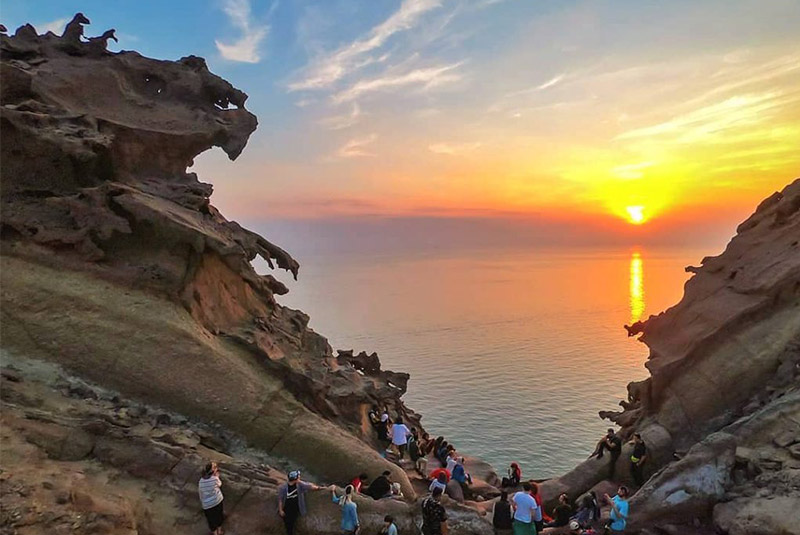 Valley of the statues is a stunningly beautiful natural site with a series of strange-looking tall rocks sculpted into bizarre shapes by harsh elements. The valley of the sculptures is also called the valley of imagination because you can see many creatures like a dragon, a sheep's head, poultry, birds and some mythical creatures, depending on how imaginative you are.

The valley of sculptures is located on a cliff that affords fantastic coastline vistas. You can have an incredible view of the Mofannagh beach from the ridge. It is also a gorgeous spot to take photos, but watch your step and be careful since there are no barriers on the cliff. The whole path of the valley is filled with crystalline sand, making it a dreamlike quality. 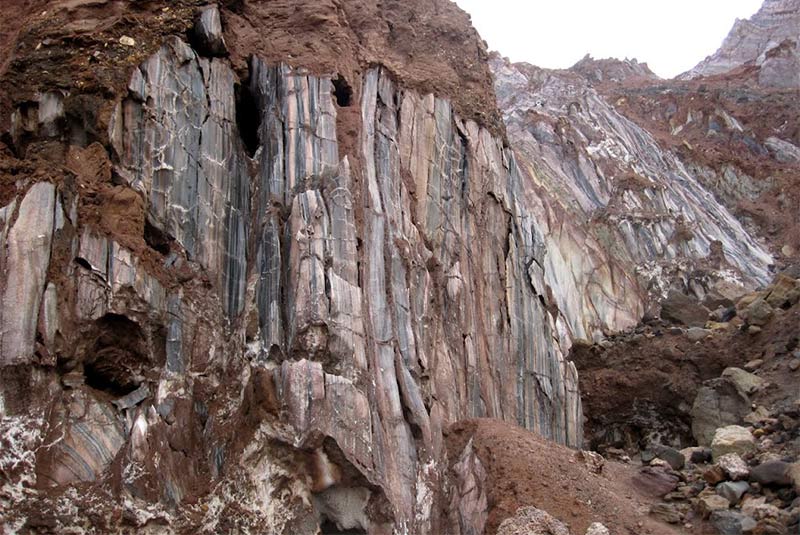 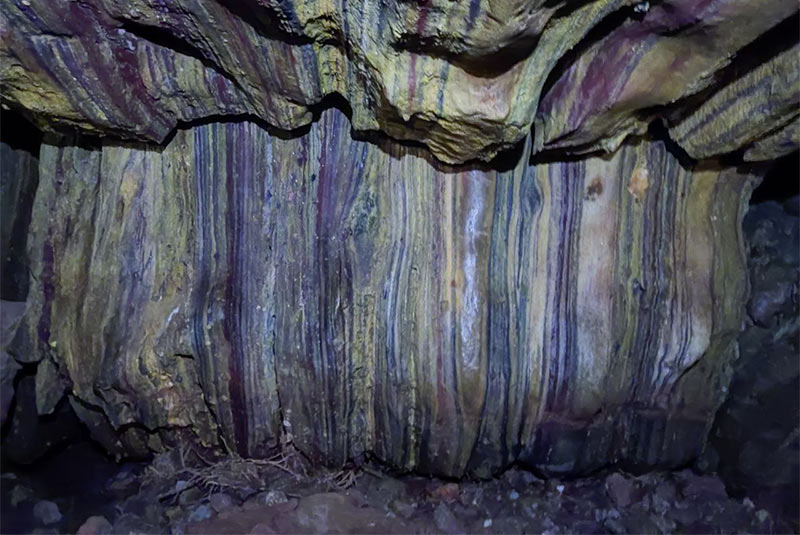 The Rainbow cave is a beautiful and colourful cave that will keep your head high upon entrance. The Rainbow cave on Hormuz island has differently-coloured layers of striped rock, looking like vast masses of shiny candy. The cave's interior is naturally designed with a vibrant combination of yellow, green, orange, purple and red colours. 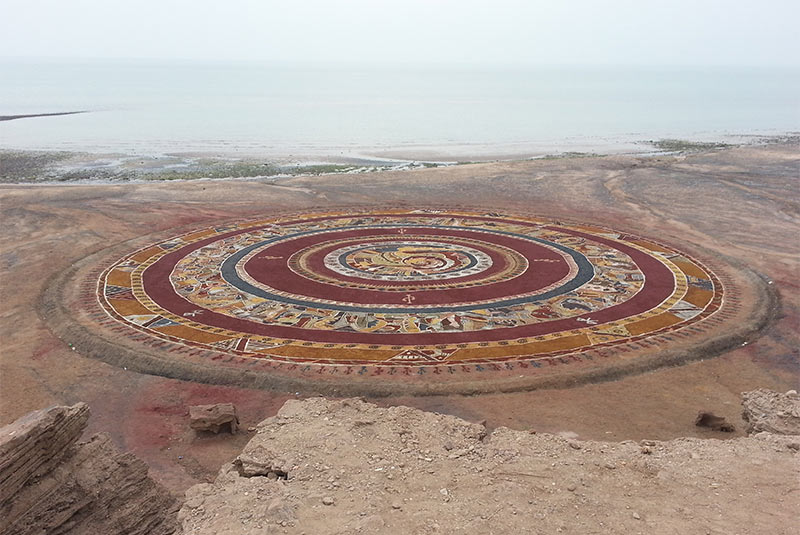 The soiled carpet is considered the world's largest soil carpet. The soiled carpet covers an area of 1300 square meters. The carpet is made from 90 different soil colours. The designers called the carpet 'Damahi', adapted from a mythical fish's name.

The giant fish is believed to help the natives trapped in panic situations. Soil carpets are part of the tradition of the Hormuz island people that dates back over a thousand years. The carpets are usually created at festival times using the colourful soils Hormuz island is blessed with. 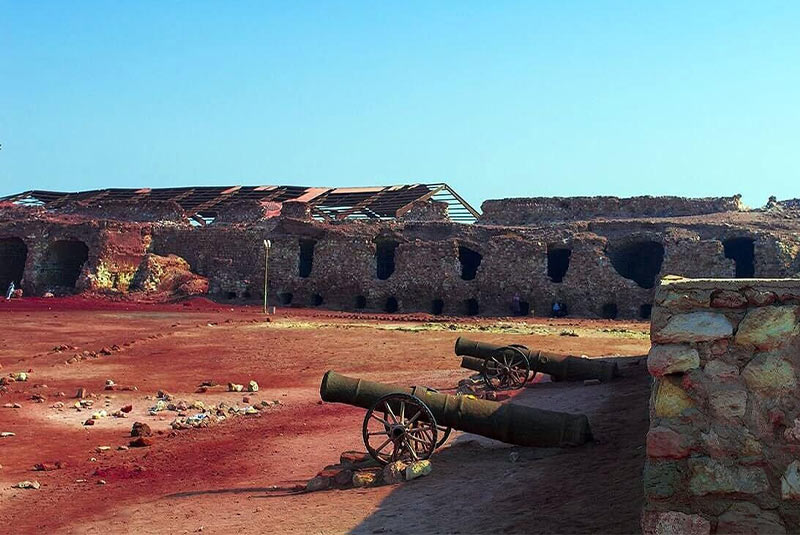 The Portuguese Castle is a historically-significant relic left from colonial times in the 16th century by the Portuguese. The Portuguese castle highlights the times of the Portuguese and their domination of the coastal areas and islands of the Persian Gulf. The red stone fortress was named the "Fort of Our Lady of Conception".

The Portuguese castle is located north of Hormuz island. The fort was made from reddish stones on a rocky promontory and was constructed in 1507 AD on the orders of Alfonso de Albuquerque, the renounced Portuguese navigator. The castle has an arms depot, water reservoir, barrack, prison, church, command centre and central hall. 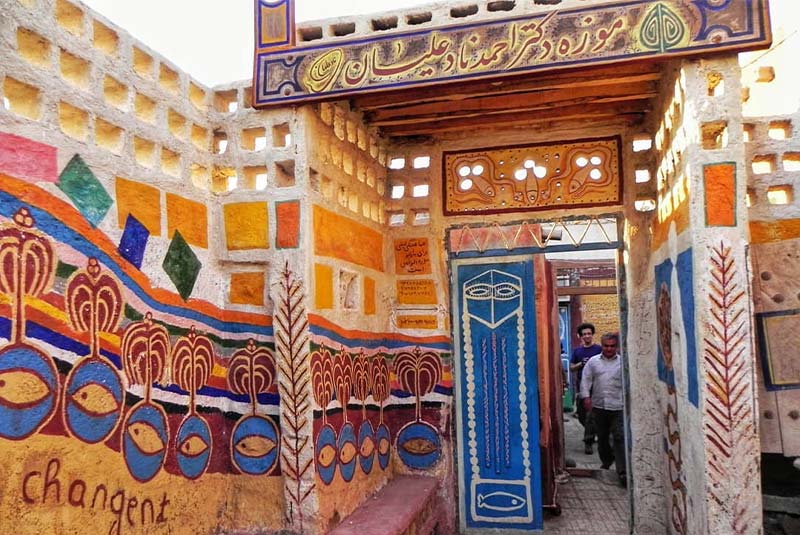 The museum also exhibits the works of local indigenous women and bones of sea creatures. In addition, dolls made of recycled materials are displayed here. A video in English explains Dr Ahmad Nadalian's involvement with local communities. 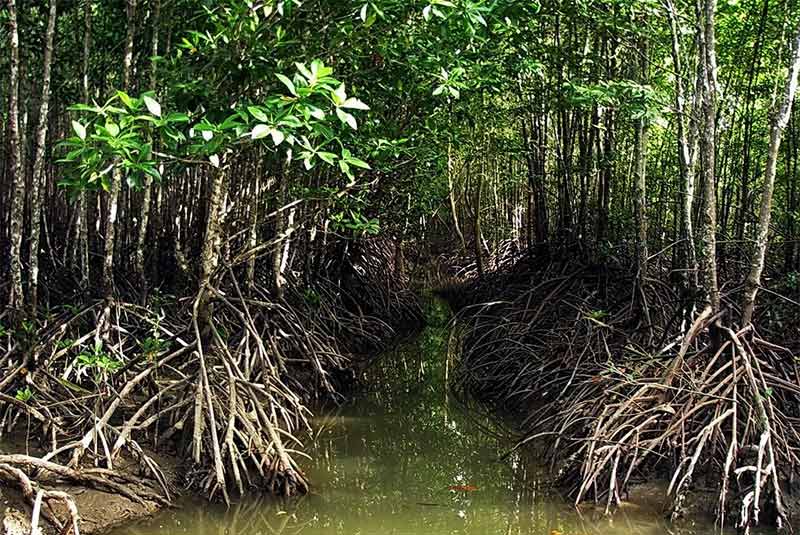 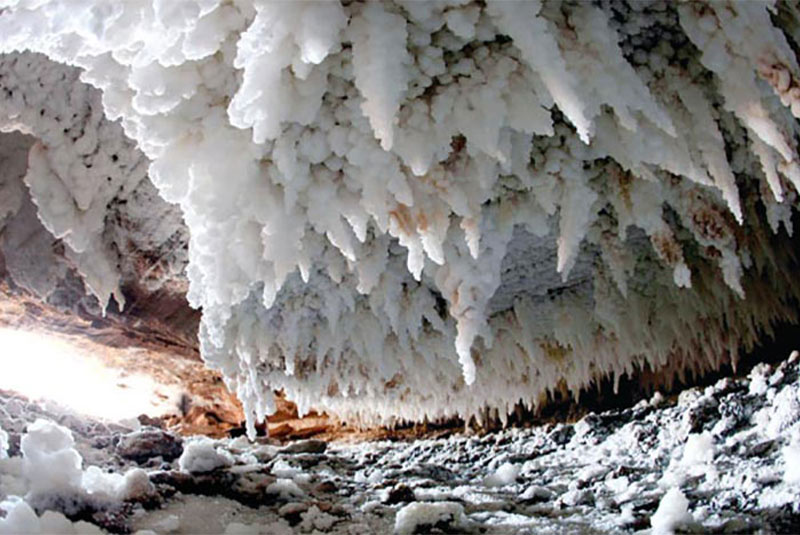 Because of the breathtaking nature and whiteness of the salt mountain, it is nicknamed The Goddess of Salt. The mountain is composed of salt with colourful textures, beautifully cut by nature over time. Underneath the salt mountain, a stream flows against an orange backdrop. The stream's excellent sound creates a pleasant feeling amid the heavy silence of the island.

The salt cave is located close to the salt mountains. You will need to bring a flashlight inside the cave to illuminate the petrified salt and the colours beneath the cave. 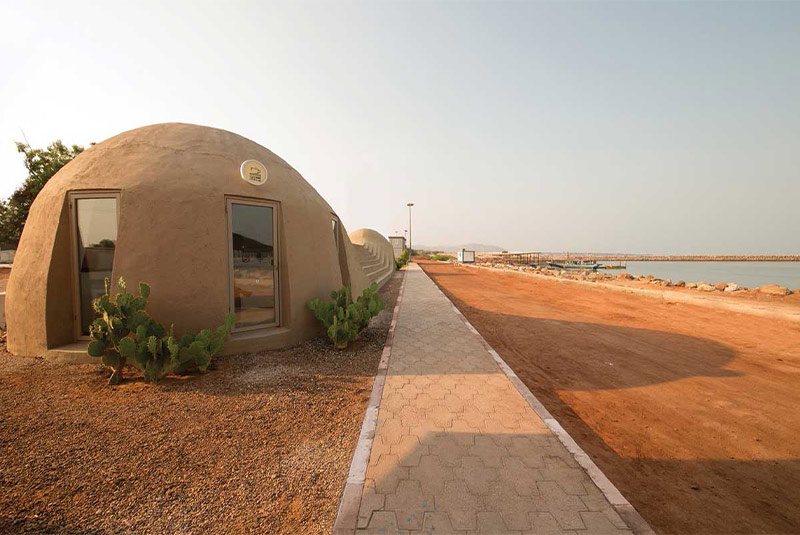 It’s very difficult to find hotels on Hormuz island. however, many locals offer their rooms as guesthouses.

The guesthouses are very simple, traditionally decorated and with a great outdoor area. The owners are very relaxed and can offer good information about the island. The bedding is traditional style with mats and blankets on the floor. Breakfast (omelette, bread, jam, tea) is included.

Another option is to camp on the beach. It is really popular in Hormuz so if you have a tent then find a nice spot and set up camp. It’s legal in Iran to pitch a tent almost anywhere!

How to Get to Hormuz Island 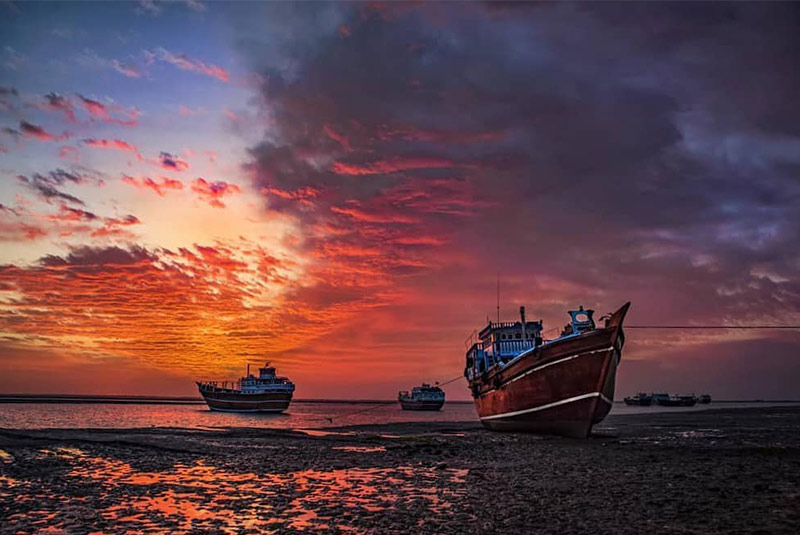 The only way to get to Hormuz is by ferry or boat. You will either need to travel there from Bandar Abbas or Qeshm Island. If you travel from Tehran or Isfahan, you might want to fly as they are too far from Bandar Abbas.

The best time to travel to Hormuz, the Rainbow Island, is winter, as the temperature is around 25°C degrees (77°F). But this is also when there are so many tourists on Hormuz Island.

How to Move Around Hormuz Island 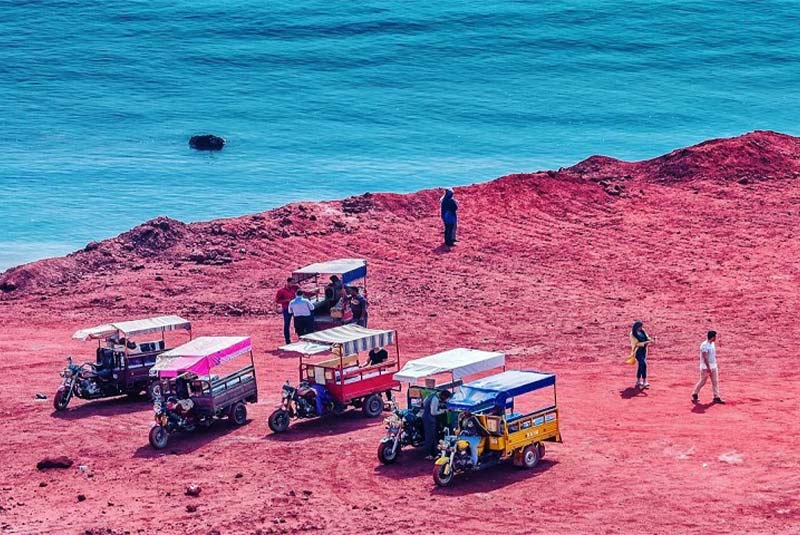 The entire island is around 30 km, with a couple of roads. Thus, it's straightforward to navigate there. There are no cars on Hormuz island, only tuk-tuks (rickshaws) and motorbikes.The best way to move around Hormuz island is by tuk-tuk (rickshaw).

This vehicle can typically accommodate 6-8 people. You can also rent a bike at the harbour when you arrive. There are other places as well to find motorbikes to rent. As the island is tiny, you can also walk around, especially if you stay there for a long time.

What & Where to Eat on Hormuz Island 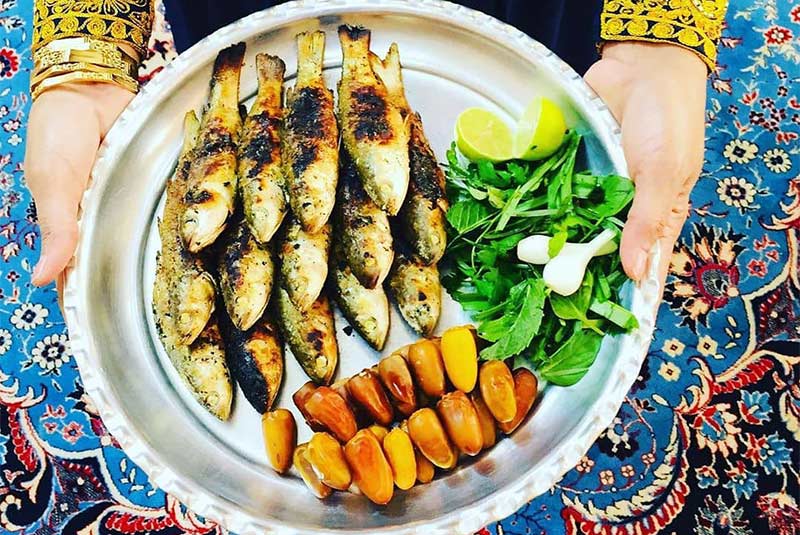 If you like seafood, You should consider shrimp and rice called maygoo and birinj in Farsi. One of the most exciting things is Hormuz Island's red soil. The red soil is an essential spice on the island. For example, the soil of Hormuz Island is used to make the local bread called Tomshi. You can also find homecooked fish stew, also known as Ghalieh Mahi, which is made with herbs and rice. Falafel is popular with the locals and is the most accessible food on Hormuz Island.

There is a scattering of cafes on the island to choose from and restaurants serving traditional food. In addition, some women cook on the street or in houses and sell food such as falafel or crapes.The cafés usually serve falafel, tahini and date shakes. Also, some cafes serve tea and snacks. Moreover, there are a couple of cafés such as the Gelak Café where you can find tasty seafood.