Top 9 most beautiful and historical castles in Iran

Iran is one of the first civilizations in the world and it has been the homestead of many people and rulers during its thousands of years of history. As the country situated on the ancient Silk Road to connect West and East, it has always been a witness of battle and invasion by different countries.

Therefore, defending measures take major roles and among those, castles play the most important role. Here, we try to introduce the most beautiful and historic castles in Iran. 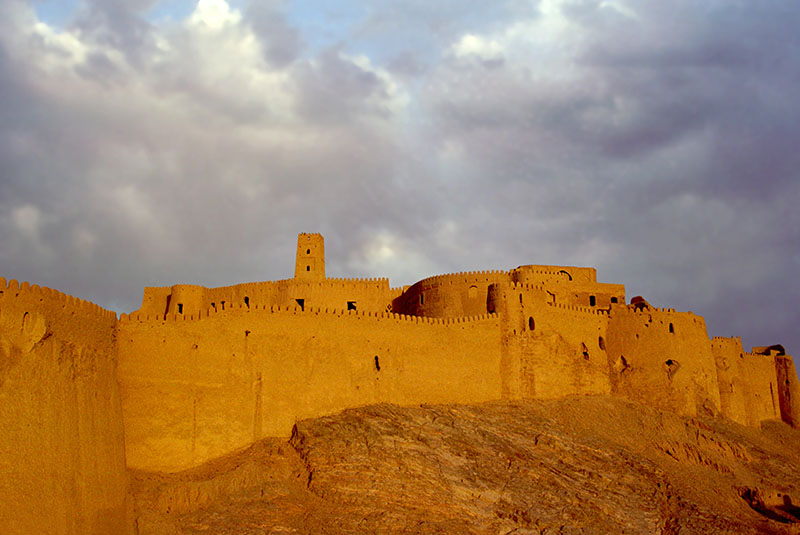 The city of Bam in Kerman Province and its cultural landscape were listed as the World Heritage Site of UNESCO in 2004, one year after the 2003 earthquake.

The most interesting site of the city is the Arg-e Bam (Bam Castel) with a history of 2,000 years at the Parthian Empire (248 BC – 224 AD). The castle is the best example of a fortified medieval town built in mud layers.

Unfortunately, most of the citadel was destroyed after the earthquake of 2003. However, even by considering the damage that happened to this magnificent place, you can still imagine the beauty of it.

The building of Arg-e Bam consists of two main parts: the "rulers' part" and the "ruled-over part". The former part, which lies in the most internal wall, consists of the citadel, a four-season mansion, barracks, 40-meter water well, and a stable large enough for 200 horses.

"The ruled-over part", on the other hand, is located around "the ruler's part" and contains the main entrance of the city, the main path connecting the city entrance to the fortress and bazaar alongside it, about 400 houses and public buildings like schools and sports centers. 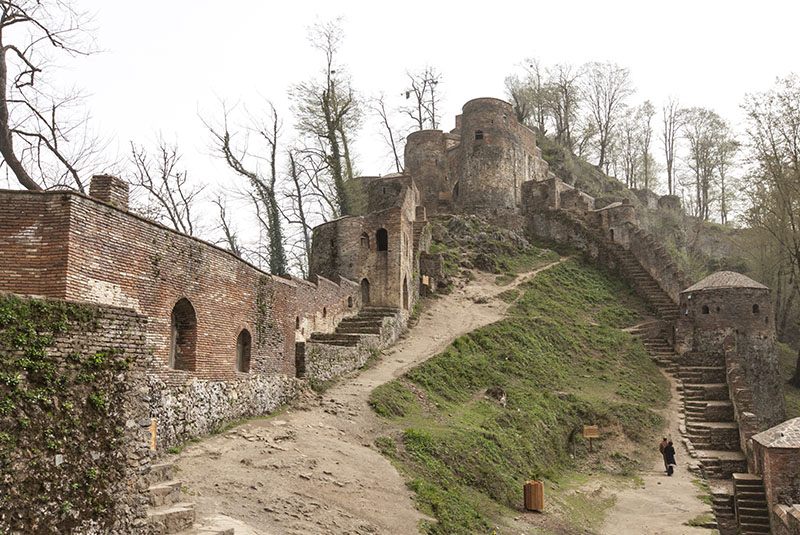 Rudkhan Castle was a military medieval castle built during the Sassanid Empire (224 – 651 AD) to defend the northern part of the country from southern Arab invaders. Throughout the centuries, this huge castle has been renovated and strengthened several times.

Rudkhan Castle is situated 25 kilometers southwest of Fuman city north of Iran in Gilan Province. The castle is built on two tips of amount, with an area of 2.6 hectares (6.4 acres).

The castle consists of several parts, most notable of which are the water reservoir, twelve gates, the prison, 42 watchtowers, housings, and the king’s quarters. The king’s quarters are located on the highest point of the castle and feature breathtaking views of the surrounding area.

To reach the castle, you need to hike in the jungle. Depending on how prepared you are, this hike can take from 1 to 2 hours.

The unique Falak-ol Aflak Castle belongs to the Sassanid Empire. It has been registered in the list of Iran's National Heritage under the registration number of 883.

The beauty and wonderful architecture of Falak-ol Aflak Castle has convinced many experts to consider this ancient historical castle of Lorestan Province as one of the engineering and architectural masterpieces. Since the first construction of the castle in the Sassanid Empire, different parts have been added to the castle.

Due to its strategic position, this castle was selected as the seat of government of Hasanawayhids and as the treasurer in Buyid Dynasty in the 4th century AH. Since the 6th century AH when the new city of Khorramabad was built, the castle became also known as Khorramabad.

The name of Falak-ol Aflak might have been given to it in the Qajar Dynasty.

There are two museums of anthropology and archeology in Falak-ol Aflak Castle Complex that are considered as the attractions of Khorramabad. 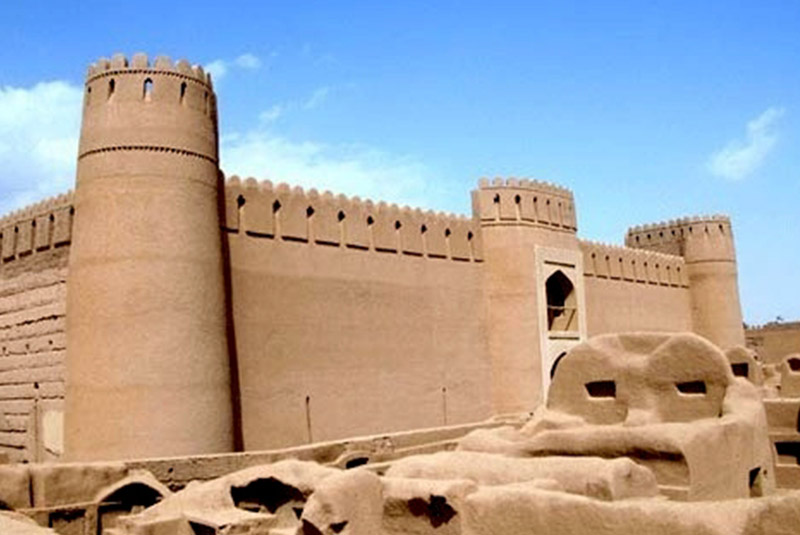 Rayen Castle is the second adobe monument in the world after Bam Citadel. It is located in the southwest of the current Rayen city in Kerman Province. Rayen Castle, a medieval mud brick, includes a school, a dock, barracks, quarantine building, and a mosque or warehouse. Watchtowers had it under control from several directions such that this castle is considered an indomitable castle.

It is believed that Rayen Castle dates back to the Sassanid Dynasty and proves the presence of Rayen in pre-Islamic Era. During the reign of third Yazdgerd, the Sasanid King, Arabs could not conquer this city thanks to its high walls supporting the counterparts of the city.

The castle was situated on the trade route, and was one of the centers for trading valuable goods, such as textiles, sword, and knife manufacturing, and later on, also guns. 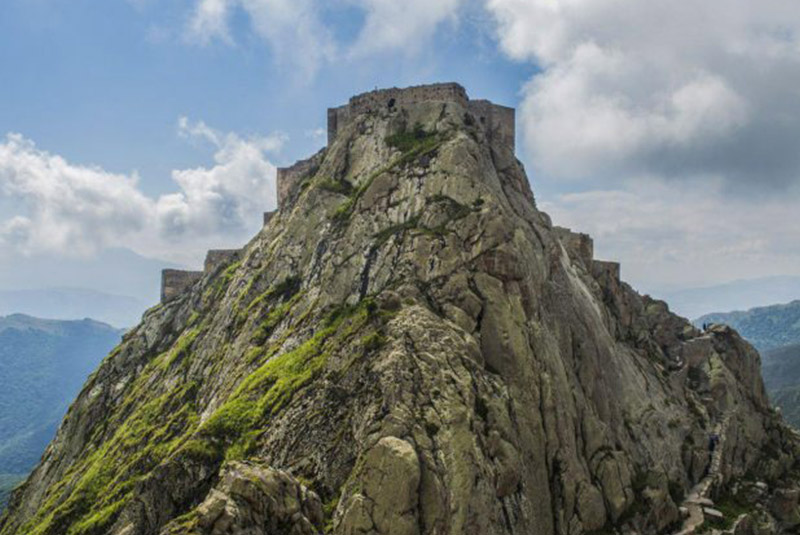 Babak Khorramdin Castle is located on the top of a mountain, on 2300–2600 meter heights, in the Arasbaran Forests. It is 6 kilometers southwest of Kalibar City in northwestern Iran.

The castle is believed to be the stronghold of Babak Khorramdin (795-838 AD), the commander of the Khurramites in Iran. Babak fought for Persian ways of life and independence of his motherland against the Islamic caliphate of Abbassids, based in Baghdad.

Access to the castle is a narrow track that winds its way across patches of dense forest, through gorges, and up steep slopes. The final approach to the castle's gate is through a narrow defile wide enough for only one person to walk at a time.

Large military equipment can be carried up this path. The citadel itself was located a further 100 meters climb from the castle's walls via a narrow path along a ridge, and the path once again was wide enough for only one person. The ridge is surrounded by a forested ravine some 100 meters deep.

Izad Khast Castle is one of the Sassanid reliefs in 57 kilometers from the north of Abadeh that is seen when entering Fars Province from Isfahan. It covers an area of 7,500 square kilometers.

One of the unique features of this castle is its significant safety and the deep trench around it. Therefore, it is one of the most unattainable monuments of ancient times for robbers and enemies.

Another archaeological feature found in the historical monument of Izad Khast is a dam. The dam was built during the Sassanid era on the mouth of the river in the south of Izad Khast. It is listed as one of Iran’s national heritage monuments.

Residential buildings in this castle are also of a special type. These houses are designed on a slope as if they are forming a staircase. In fact, the roof of the lower house was used as the yard of the upper one.

Iranian architects had also implemented such style in the architecture of Abyaneh village. This architectural pattern is one of the particular features of Sassanid architecture used in spaces with a limited area.

The fire temple of Izad Khast Castle is the first fire temple in Iran which was turned into a mosque by the advent of Islam to Iran. 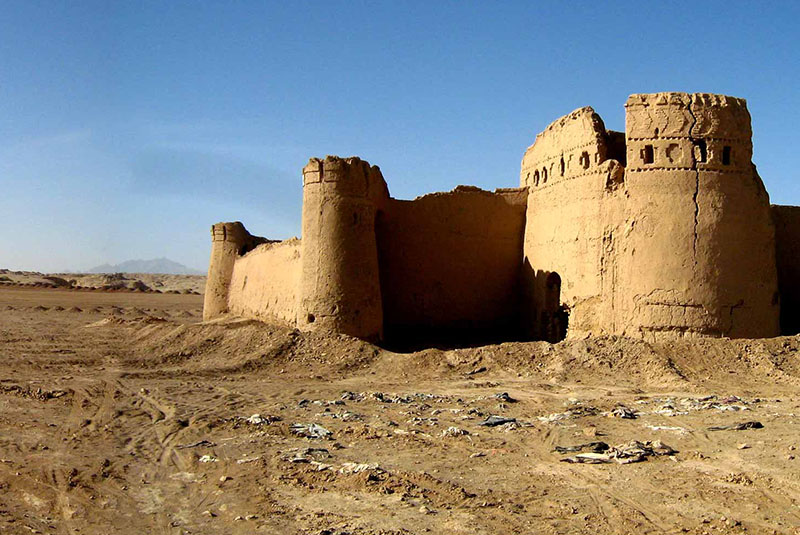 Narin Ghaleh Castle is located in the center of Meybod, Yazd Province. There is actually no written document to determine the exact time of construction of the castle. However, according to the style of the castle and its neighboring castles such as Jandagh castle, it can be said it was built during the Sassanid Empire.

Although built some 2,000 years ago, it contains what seems to be a type of plumbing system. It has a terrace high on top of the structure whose circulation is provided by two helical stairwells.

The structure also has a large underground chamber (filled now by rubble), possibly a prison. Four towers surround the entire compound, and a large gate furnishes access to a large courtyard. The structure seems to have been the victim of numerous earthquakes throughout the ages.

Markooh Castle in the heights of the Alborz Mountains near the city of Ramsar is an old military fortress that originally belongs to Sassanid Empire.

The base of the Markooh Castle is 600 square meters and used to have a capacity of 100 soldiers. The castle walls and watchtowers are made of rock and limestone. At the time of the siege of the Ismailis, 41 soldiers were present inside this imperturbable castle which was conquered due to the betrayal of one soldier. The tombs of these 40 soldiers are still there at the bottom of Markooh.

Bampour Castle used to be a military castle. It is located 24 kilometers west of Iranshahr, in Bampour district, Sistan and Baluchistan Province. The castle is situated on a high artificial hill with an altitude of 80-meter.

Bampour comprises of both a mountainous and plain region and experiences a hot and relatively humid climate. Therefore, the best time to visit the castle and all the neighborhood is during the fall and winter.

The castle is made up of two sections, which are not the same in terms of height. The courtyard is located at the entrance to the eastern wall of the castle and surrounded by several towers, where the materials used are brick and mud.

If you are interested to tarvel to Iran and see its beauty, we are here to offer you the best our Iran tours packages.