Persian Carpet; the variety of pattern, color, and material

Every country is famous for some items, and Iran is very popular for its carpet you ever travel to Iran, it would be a great idea to have a visit to National Museum of Iran in Tehran.

The visit will give you range of information about different types of carpet in every corner of Iran. You will also understand the pattern, , and material which every district use.

The "traditional skills of carpet weaving" in Fars Province and Kashan City were inscribed as Intangible Cultural Heritage Lists of UNESCO in 2010.

In this article, we are going to talk about the history of Persian carpet and various types of that. 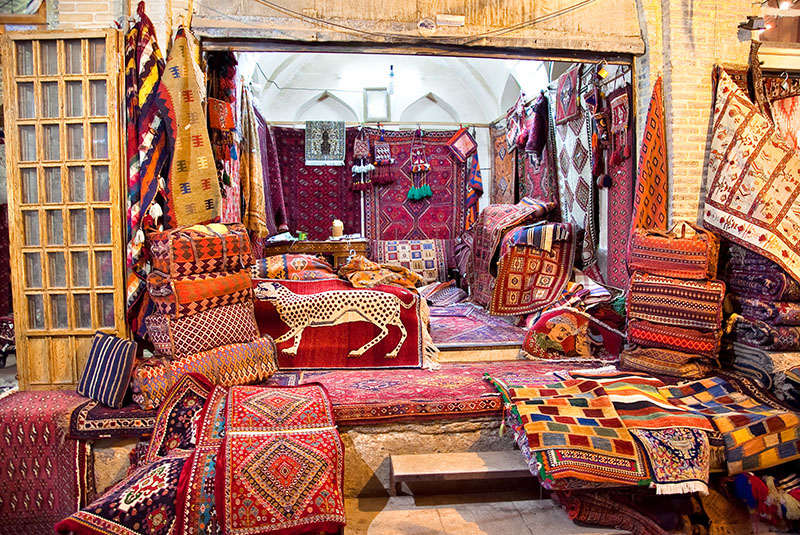 It is still unknown when the carpet weaving started for the first time. It is believed that the Pazyryk carpet which was found in Siberia is the oldest carpet so far. The result of radiocarbon testing indicates that the  Pazyryk carpet was woven in the 5th century BC.

However, from the advanced technology which is used in the carpet, it displays an evolution in weaving, therefore, it is not known when the first carpet was made in history.

Xenophon; the Geek author, mentioned Persian carpets in his book “Anabasis” for the first time in around 400 BC. He mentioned the carpets as valuable diplomatic gifts. Unfortunately, there are no surviving carpets from Achaemenian, Seleucid, and Parthian dynasties. During the Sasanian dynasty, flat weaving and embroidery were started. It was also the beginning of fragmentation.

In 1499, Shah Ismail the first who was the founder of the Safavid dynasty in Iran made a great effort in developing Persian arts included Persian carpet weaving. By the late fifteenth century, the miniature art, floral ornaments, animals, and large spirals were depicted in the design of  Persian carpets.

After the Safavid period, the carpet weaving technique did not change a lot, but the material and patterns were developed.

Wool, cotton, and silk are the most common materials in carpet weaving. The are spun either by hand or mechanically by using spinning wheels, the industrial method is by using spinning machines to produce the yarn.

The dyeing process involves the preparation of the yarn, adding dyestuffs, and drying the yarns in exposure to air and sunlight. Traditional dyes used in Persian carpets are taken from plants and insects. As an example, red from “Madder”, yellow from “onion”, and black from “Oak apples”.

The handmade carpets in Iran are often named after the area where they are made, for example, Hamadan, Mashhad, Kerman, Shiraz, and Bidjar. The carpets can also be named after different ethnic groups like the Ghashghais.

The city of Qom has a great variety of patterns, flowers, medallions, cypresses, gardens, hunting scenes, vases, and birds. The are often reddish-brown, dark blue, orange, pink, or turquoise.

The Persian carpets from Nain have patterns of plants and animals and intertwined branches with small flowers. The are typical of the region, light ivory or white with branches in blue or green. The knots of wool and threads of silk are often seen to emphasize the pattern. 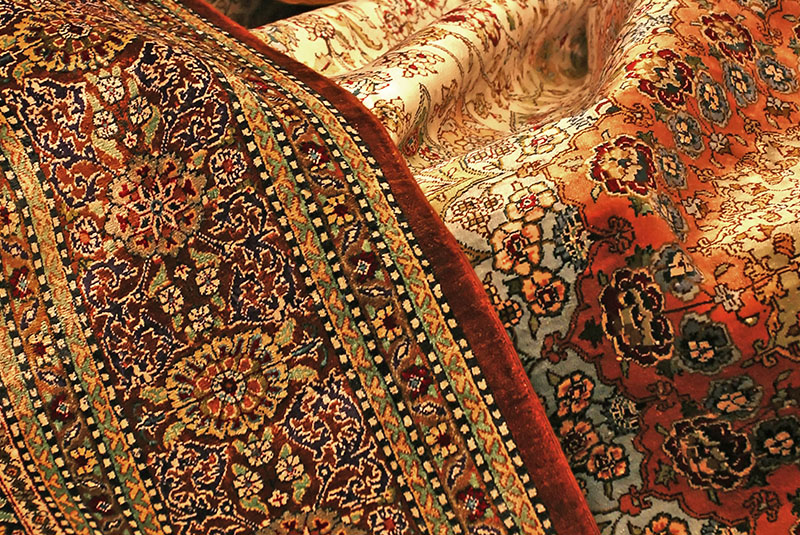 The Isfahan carpets the same as those from Nain, have patterns of flowers and intertwined branches, often with a medallion.

The carpets from Tabriz are of high quality and come in a great variety of sizes. The pattern could be floral, vases, trees, hunting scenes or teardrop medallions. The most famous design is called Mahi “which means fish”.

Kashan is well-known for the carpets produced in this region. There are two types of carpets in Kashan. One of those is made from unbleached cotton warps and double wefts of cotton.

The other type uses pure silk wefts and double silk warps, employing the same Turkish known method. The most common patterns of Kashan carpets are the Mehrab and medallion.