The Moghadam Museum, the incredible house at the heart of Tehran

The Moghadam Museum is one of the most incredible houses in the world due to its architecture, history, and items which are stored and exhibited at the house. With the traditional Iranian architecture, there is a small garden, several turquoise ponds, and lots of trees in the yard

Moghadam Museum is located at the heart of Tehran at the crossroad of Imam Khomeini and Hassan Abad Square. Although, the entrance of the museum is not very obvious from the street, as soon as you step in the , the house is ready to show you all the beauty of it.

The house was originally built during Qajar dynasty, around 200 years ago. The owner was Ehtesab--Molk, one of the authorities of Nasseredin Shah. Later, his son, Mohsen Moghadam, a professor of archeology at Tehran University, who loved painting since childhood, and studied painting at Kamal--Molk School, inherited the house with his French wife Salma. Since the couple appreciated historical and artistic arts and handicrafts of Iran, they started collecting valuable items from all around the country, if possible use them in the structure of the house, and exhibit items in the property.

However, the house became popular in the 50s and 60s when Professor Pope, the American art historian wrote an article about this house with the title: Survey of Iranian Arts, which was published in Sepid-o-Siah magazine. 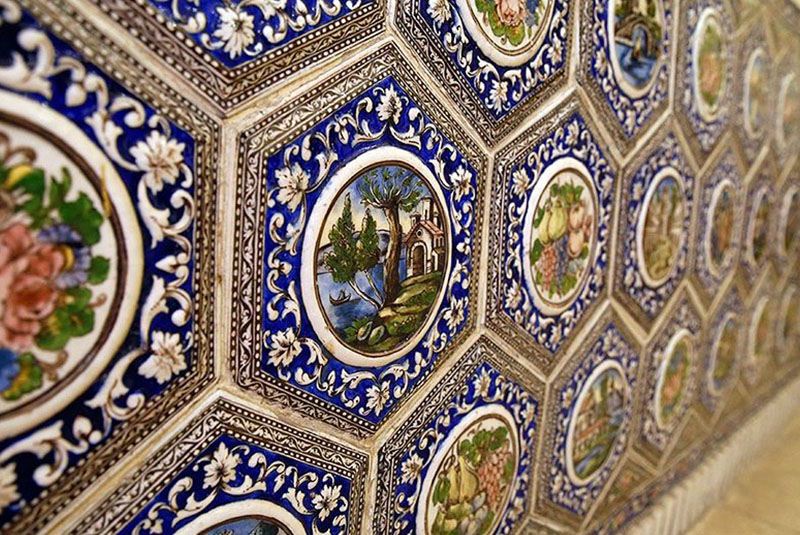 The architecture of Moghadam Museum

The house used to be one of the luxurious houses during the Qajar Dynasty and has the two normally found sections in the Old Iranian houses called (public wing) and (private wing). However, Dr. Moqaddam did not want to follow the exact pattern of Iranian traditional architecture, he asked Professor Houshang Seihoon to separate the inner and outer courtyard with a modern style wall. As a result, he suggested using several tiled columns with arches. The columns reminiscent of the Chehel Sotoon Palace in Isfahan.

In the west part of the mansion, the main section (tower) is located, which had been mastered by professor Moghaddam and one of his students at the Faculty of Fine Arts, doctor Abolqasemi, in 1966. The building is decorated with tiles from the Qajar era and parts of Iranian arts and crafts been exhibited in it.

The decoration of the house is typical for that period style: colorful tiles, columns, and arches create a unique authentic atmosphere.

There are exclusive valuable golden tiles, installed in walls to be protected and preserved. These tiles are absolutely unique in the world.

Next, to the entrance, there is a small room, in which all door and walls decorated with valuable and semi-valuable gems and beautiful corals.

In the northern part of the building a porch with beautiful arches and columns decorated with tiles which were made during Zand and Qajar Dynasties. In the middle of the porch, there is a pond from marble.

In his journals, Dr. Moqadam has mentioned how he founded these historical items and bought them either from vendors or house-owners intending to destroy their historical houses with whatever inside them. Some of the items were given to him as a gift by foreign ambassadors or guests, like those which are speculated to be from Jerusalem.

The museum is located in the heart of Tehran, within walking distance from Hassan Abad metro station and Alborz BRT bus stop.

Opening Hours: From 9 A.M to 4 P.M (closed on Fridays and national holidays)