Golestan Palace, or the Palace of Flowers houses some of the capital’s oldest royal buildings and is one of the most prominent historic complexes in Iran. During the Qājār rule, this now UNESCO World Heritage listed site was considered the political capital of the Qājār dynasty and had witnessed coronations of seven Qājār rulers as well as both of the Pahlavi kings.

The rumour has it that in order to avoid any social unrest following the king’s death, it was decided to keep Nāser Al-Din Shāh’s murder a secret. The dead body of the king was, thus, placed into the royal coach (kept in the National Car Museum of Iran) and sent to the Golestan Palace. A man impersonating Nāser Al-Din Shāh and wearing white gloves would at times wave at people or touch his moustache in the same way as the dead king used to do. Once in the Golestan Palace, the body of the dead king was buried for a period of one year in the Royal Tekiyeh and later moved to the Abdol Azim shrine. 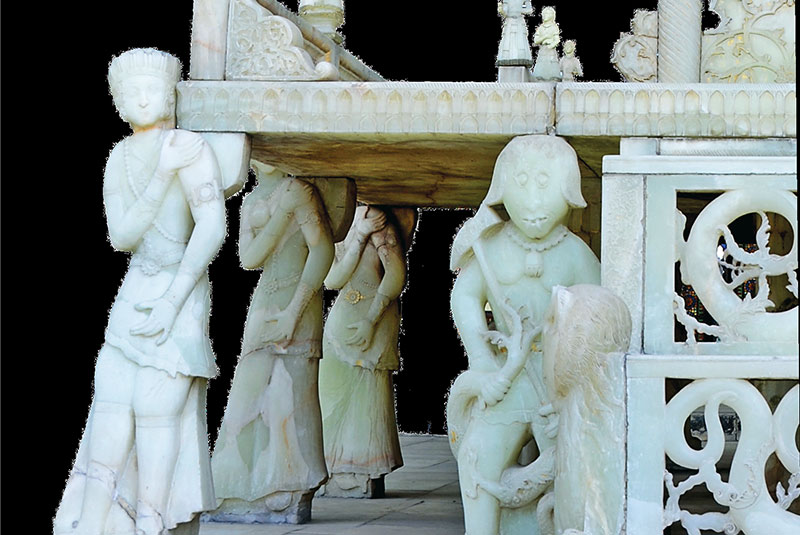 As most of the buildings within the site date to the Qājār era, it is generally perceived as a Qājār palace complex. The true history of its origins, however, stretches far back to the Safavid period when, in 1580, Shāh Abbās I built a citadel in Tehran. Later on, between 1760 and 1767, Karim Khān Zand built a divānkhāneh (court or seat of the government) within the Safavid citadel and changed the main design of the complex. At present only the Marble Throne Veranda and Karim Khāni Nook date to this period.

After Karim Khān’s death, Aghā Mohammad Khān, the founder of the Qājār dynasty, took advantage of the ensuing civil unrest in Iran and expanded Qājār territory up to the cities of Tehran and Damghan. In 1795, he defeated the last king of the Zand Dynasty, Lotf Ali Khān conquered Tehran the following year and declared himself the king of Iran. Aghā Mohammad Khān’s coronation at the Golestan Palace turned it into a place of unrivalled importance among the Qājār kings. Fat’h Ali Shāh(1772–1834), who was also crowned here, had commissioned further decoration and expansion works of the palace complex. Nāser Al-Din Shāh, impressed by the palaces he had visited in Europe, had the Palace extensively renovated, having it almost entirely reshaped. The complex did not undergo any further changes until the fall of the Qājār dynasty in 1925.

Golestan Palace has subsequently witnessed coronations of the Pahlavi kings. During the reign of Rezā Shāh Pahlavi all the surrounding buildings known as andaruni or haramsara (domestic spaces that are reserved for the women of the palace and are inaccessible to adult males except for close relations) were completely demolished. These andaruni spaces, also known as Farahabad during the reign of Fat’h Alī Shāh, consisted of several interconnected, exquisite yards surrounded by rooms of various sizes intended for female dwellers of the royal harem who would spend their allocated time with the monarch here. There have always been numerous stories surrounding the haramsara, as told by the favourite wives of the kings, or stories about the famous clown Aziz Al-Soltan or the coquetries of Babri Khān, the royal cat whose sudden disappearance made haramsara residents feel melancholic. 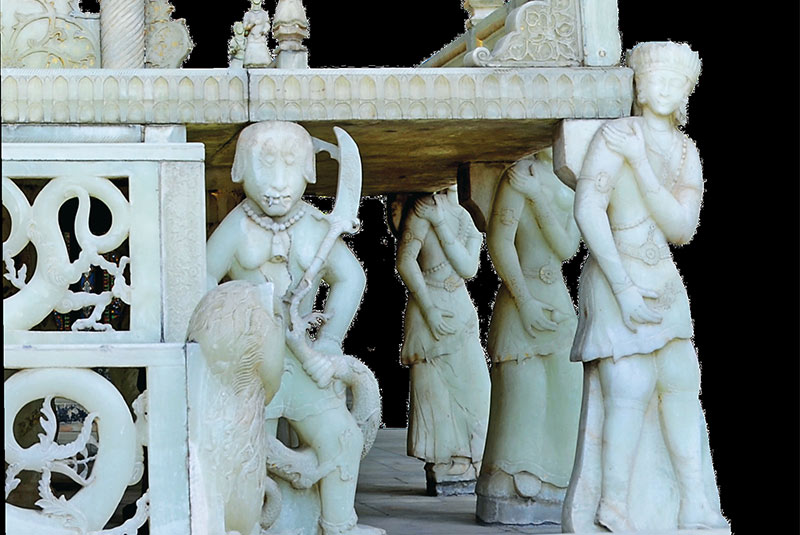 In 1792, when Aghā Mohammad Khān conquered Shiraz, he had the paintings, curtains, mirrors, columns and marble slabs from Karim Khān’s citadel in Shiraz transferred to Tehran, which at that time already had a Zand divānkhāneh, and installed in the Marble Throne Veranda built for this purpose in 1807. The veranda contains elements from both Zand and Qājār periods.

In 1807, Fat’h Alī Shāh ordered construction of a marble throne, which came to be known as Takht-e Tavous (the Peacock Throne), consisting in total of 65 pieces of marble brought from mines in Yazd, to be placed permanently in the veranda. The jewel-studded throne is carried on the shoulders of angels and demons, referring to the story of Solomon’s flying throne. This is why the Peacock Throne is also called the Throne of Solomon. Seventeen verses on its upper side praise Fat’h Alī Shāh and the throne itself.

The Marble Throne Veranda was used on ceremonial occasions and for royal receptions. During religious celebrations and other festivals, the king would sit on the throne while statesmen, royal courtiers, ambassadors and foreign envoys would pay him homage. In 1925, Rezā Shāh Pahlavi held a symbolic coronation in the Marble Throne Veranda before his official crowning. 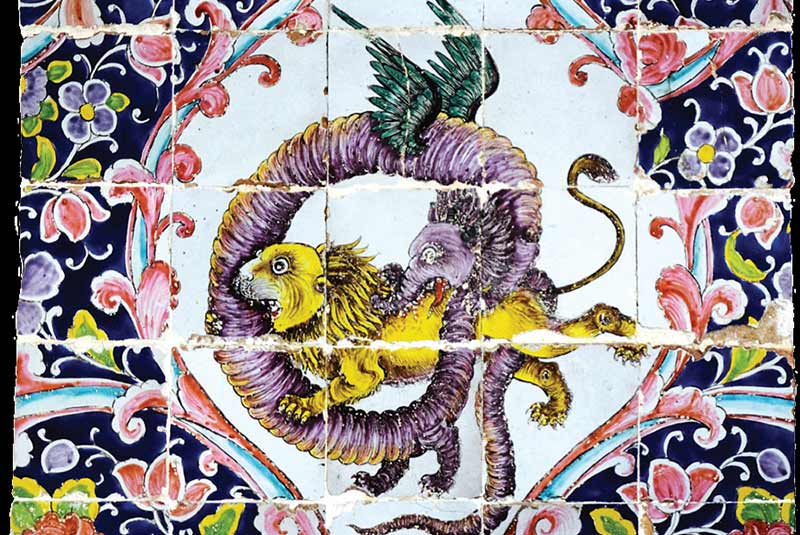 Next to the Marble Throne Veranda is the second Zand monument, the Karim Khāni Nook or Karim Khāni Veranda, which was Nāser Al-Din Shāh’s favourite place of retreat and where he had spent long hours in solitude. When looking at its earlier photos, the veranda has, alas, lost some of its original features. The stairway leading to the Karim Khāni Nook has a tragic story of its own. Out of his long-nurtured hate of Karim Khān, Aghā Mohammad Khān had the Zand monarch’s body disinterred and reburied under the stairway. Later in 1925 Rezā Shāh Pahlavi ordered for Karim Khān’s bones to be reburied next to the Safavid king Shāh Soltan Hosein in Qom. Some historians insist, however, that the remains were brought back to the Karim Khān Zand’s original grave in Shiraz.

One of the most interesting objects in the Karim Khāni Nook is the tombstone of Nāser Al-Din Shāh, assassinated in 1896. Brought here from the Shāh Abdol Azim shrine, it is a single piece of marble stone, bearing a life-like relief of the king carved by Abbās Gholi. More interesting, however, is the story, or rather stories, about the king’s assassination. One common assertion among various divergent versions is that on April 29, 1896 Nāser Al-Din Shāh attended the Shāh Abdol Azim shrine in Rey for prayer. Unlike on other occasions, however, he ordered for the shrine to be kept open to the public. A man known as Mirza Rezā Kermāni, taking advantage of this situation and bearing a petition in his hand, approached the king to ask for his favour. Once at the right distance, he pulled out a handgun and shot the king in the heart. In an attempt to save Nāser Al-Din Shāh, a chair was brought from the private tomb of Badr family, which he was seated on. Faded traces of the king’s blood are still visible on the chair, placed in a corner of the main hall [of the palace] for the visitors to have a look at.

The rumour has it that in order to avoid any social unrest following the king’s death, it was decided to keep Nāser Al-Din Shāh’s murder a secret. The dead body of the king was, thus, placed into the royal coach (kept in the National Car Museum of Iran) and sent to the Golestan Palace. A man impersonating Nāser Al-Din Shāh and wearing white gloves would at times wave at people or touch his moustache in the same way as the dead king used to do. Once in the Golestan Palace, the body of the dead king was buried for a period of one year in the Royal Tekiyeh and later moved to the Abdol Azim shrine. 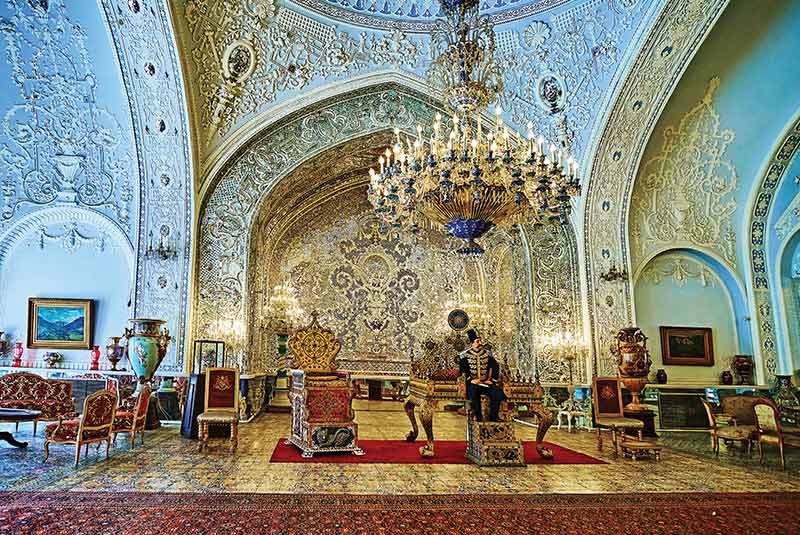 As a passionate collector of unique pieces of art, Nāser Al-Din Shāh converted the Salam Hall into a royal museum, so the valuable gifts from European officials could be kept there. He also ordered demolition the Emarat-e Biruni (outdoor mansion), which had previously been used as the palace museum. The hall had, nonetheless, continued to be used for coronation of some Qājār kings and several royal receptions. The Salam Hall is also adorned with large, attractive chandeliers and eye-catching paintings by Kamāl Al-Molk. To celebrate the coronation of Mohammad Rezā Pahlavi, the display of the objects in this hall were rearranged to what it looks like today. 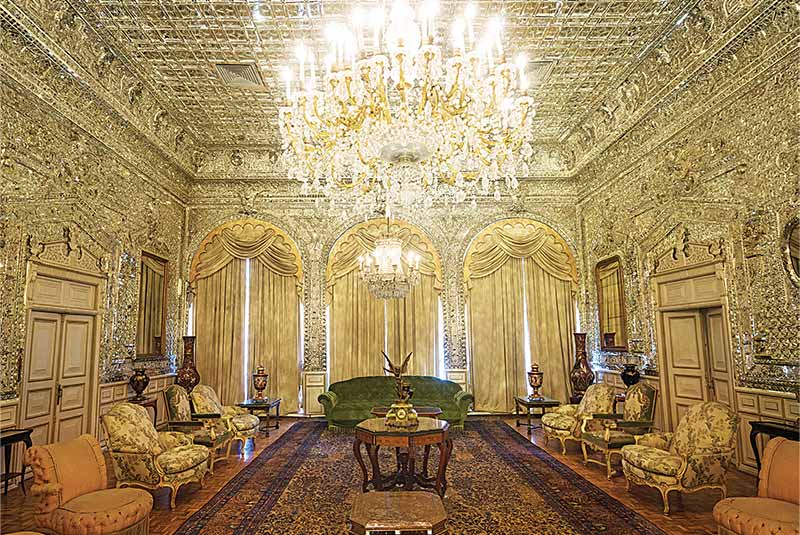 The Mirror Hall and Salam Hall were built concurrently in 1874 to safeguard the Peacock Throne and the Imperial Throne. Abdul Hassan Memārbashi, also known as Sani Al-Molk, had worked on the design of the hall in close cooperation with the then construction minister Mirza Yahyā Khān Moatamed Al-Molk. On completion, renowned painter Kamāl Al-Molk started working on his famous painting of the Mirror Hall. Incidentally some jewels from the Peacock Throne were stolen, thus putting the painter under suspicion and prolonging his work by five years. 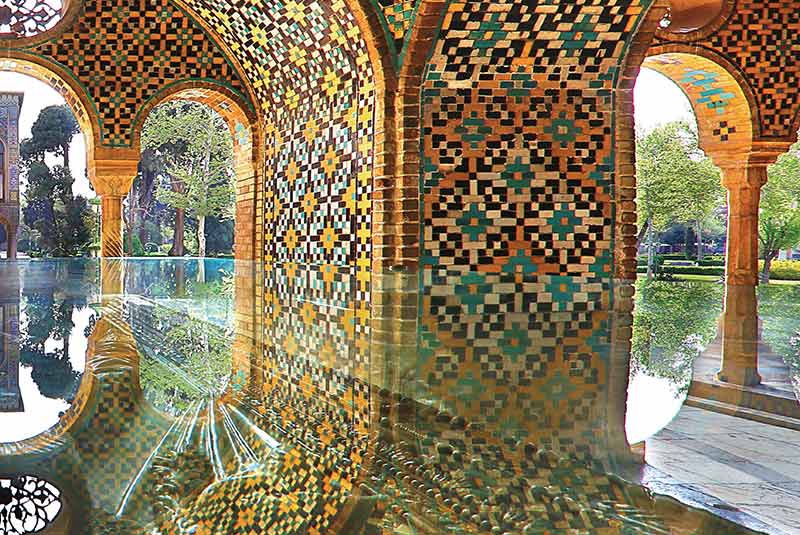 Aaj is a Turkish word for ‘hunger’ and the hall where the king’s guests were served food has, thus, become known as Aaj Hall. A note of caution, nonetheless, seems necessary here. In Persian, the word for ivory has exactly the same pronunciation as the word for hunger in Turkish, namely Aaj, and since there is a pair of elephant tusks in this hall, a gift to Mohammad Rezā Pahlavi from the government of India, many Iranian visitors call the Aaj Hall the Ivory Hall.

Based on the available documents, construction of Shamsol Emāreh started in 1866 and lasted two years. Designed by Moayer Al-Mamālek and built by Ali Mohammad Kāshi, this five-storey high building was meant to stand out against the backdrop of one-storey buildings of Tehran and was, thus, named Shamsol Emāreh, meaning the ‘sun of all buildings’. Besides its height, Shamsol Emāreh was also the first building in Iran to be constructed with iron girders. Its other notable feature is the clock tower, located in the middle of the upper floor façade. The clock was a gift to Nāser Al-Din from Queen Victoria of England. The fifth floor of Shamsol Emāreh was known as Kolah Farangi. From here, using simple binoculars, the king’s wives would enjoy a panoramic view of the city and the Alborz Mountains.

According to historical records, on the inaugural day of Shamsol Emāreh, a royal commander, General Mirza Hossein Khān, whispered ill-intended words into the ears of Nāser Al-Din Shāh that the royal treasury had to take full responsibility for the construction expenses of the monument. General Doost Ali Khān Moayer Al-Molk, passing by the very same minute, had pledged to the Shāh to personally take care of the expenses. 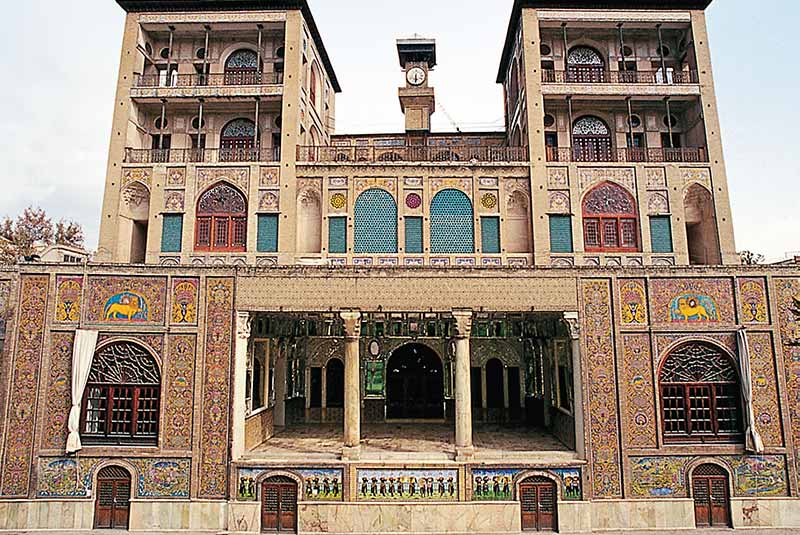 The Wind Tower Building, built on Fat’h Alī Shāh’s orders in circa 1806 is undoubtedly one of the most attractive buildings in the Golestan Palace complex. The grand monument is decorated using a variety of architectural art techniques, including tiles, mirrors, incrustation, gilding, wood carving, etc. Sash windows installed in this building are characteristic of Iranian architecture.

The most conspicuous element of the building, however, is its four wind towers trapping the wind and channelling it to the howzkhāneh (pool house) in the basement and then funnelling the cool air into the interior spaces. This ingenuity would ensure the continuous flow of pleasant air inside the building. There have also been numerous stories associated with the Wind Tower Building. It was said that once when Tehran was experiencing one of its hottest summers and Muzaffar Al-Din Shāhwas due to be crowned the king of Iran, a decision was made to hold his coronation in the tower to escape the scorching heat. Furthermore, Kamāl Al-Molk resided in the Wind Tower Building for a period of time and during the rule of Mohammad Rezā Pahlavi, it was used as the royal library. According to Moayr Al-Molk, beautiful birds of different species were kept around the pool in the basement of the building. Presently, the howzkhāneh houses a photo gallery, whose many photos were taken by Nāser Al-Din Shāh himself.