Shahr-e Sokhteh; the beginning of civilization 5,200 years ago

Shahr-e Sokhteh, which stands for ‘Burnt City’, is situated at the junction of Bronze Age trade routes crossing the Iranian plateau, in the Sistan and Baluchistan province, in the southeast of Iran.

The remains from the mudbrick city display the emergence of the first complex societies in eastern Iran. According to the evidence, it is believed that the city was structured around 3200 BC, which was populated during four main periods till the end of 1800 BC.

During that time, it was developed several distinct areas within the city. For instance, monuments were built, and separate quarters for housing, burial, and manufacture. The eventual abandonment of the city in the early second millennium was caused by the diversions in watercourses and climate change.

The structures, burial grounds and a large number of significant unearthed there, and their well-preserved state due to the dry desert climate, make this site a rich source of information regarding the emergence of complex societies and contacts between them in the third millennium BC. The main monument and all the surroundings listed as World Heritage Site by UNESCO in 2014.

The monument which was one of the world’s largest cities as its time covers an area of 151 hectares. A graveyard with an area of 25 hectares which contains between 25,000 and 40,000 ancient graves located in the western part of the building.

According to the historical evidence the settlement was built around 3200 BCE and had four stages of civilization. It was burnt down three times before being completely abandoned in 1800 BCE.

In the early year of the 1900s, the site was discovered and investigated by Aurel Stein. By the beginning of 1967, excavation started at the site by the Istituto Italiano per l'Africa e l'Oriente (IsIAO) team led by Maurizio Tosi.

The project continued till the end of 1978 when the Islamic revolution happened in Iran. The project later started by the Iranian Cultural Heritage and Tourism Organization team which led to new discoveries.

Almost all the material which was discovered at the monument dated back to the period of c. 2700-2300 BCE. According to these discoveries, the city was a hub of trading routes which connected Mesopotamia and Iran with the Central Asian and Indian civilizations, and as far away as China.

A recent discovery identified a male camel rider who they believe was a messenger in ancient times. Studies on the skeletal remain the evidence of bone trauma, suggesting that he was a professional rider who most likely spent most of his life on camelback.

Although there is evidence showing that smaller draft animals were also used in the Burnt City, the act of gathering up a leg while riding is something that one does while riding a camel over long distances. Scientists, then, believe that the man was probably a courier who regularly on camelback.

Following the evidence founded in the excavations, a group of paleoanthropologists believes that women had a social and financial role in the Shahr-e Sokhteh. Some believe that the female owners of the insignias used them to place their seal on valuable documents. Others believe the owners may have used the seal to indicate their lofty status in society. 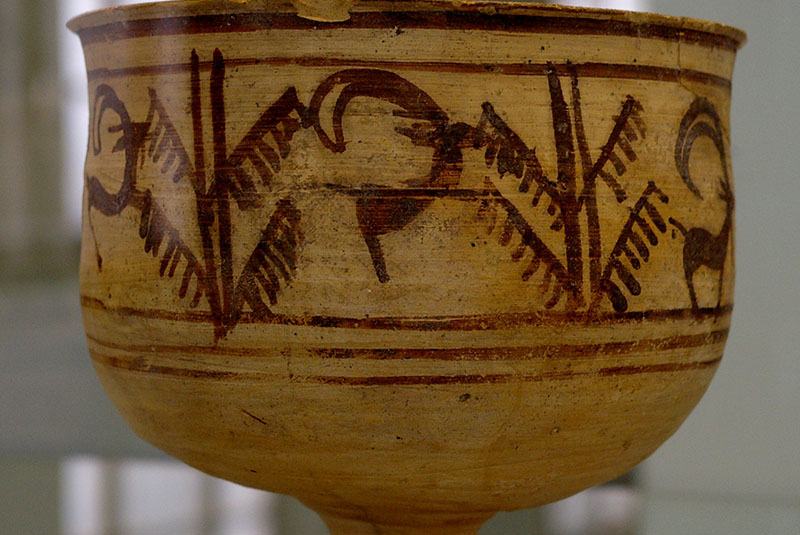 Evidence shows that weaving was not done as a hobby in the prehistoric city but it was a common profession which required a special skill. Residents made a variety of woven products such as carpets, baskets, and other household items.

The excavations at the Burnt City also suggest that the inhabitants were a race of civilized people who were both farmers and craftsmen.