If you travel to Iran and visit Isfahan, you will definitely see the splendid art of engraving at the Bazaar of Isfahan.

The engraving is the art of carving superb designs on various kinds of metals such as copper, brass, silver, and gold. The same as other Iranian handicrafts, Isfahan is the main center for engraving, and it is believed that there was a significant development of engraving during the Safavid dynasty.

According to the historical evidence, the history of engraving has not been too far from the time when man discovered and used the metals. If you visit the Iranian National Museum called Iran-Bastan Museum, you will see the ancient samples exhibited there. The historical discoveries found items belonging to the ancient times of Sassanian (700AD), and the Seljuk (100 AD). Some of the outstanding metalwork have been done during the Safavid dynasty in 1600 AD. 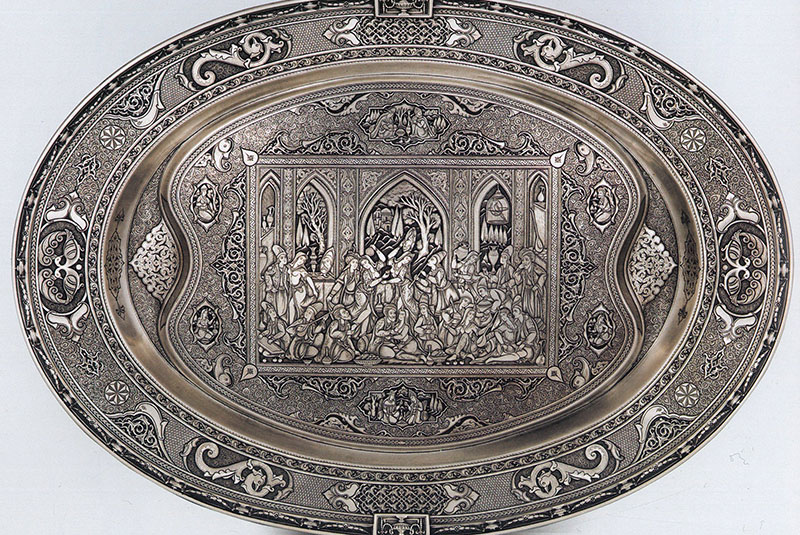 To make an engraving on an item, first, the pattern should be drawn by the artist. The back side of the work should be covered by a layer of tar, and baked with some other materials. After that, the main lines of design would be traced by carving chisels, which usually takes time according to the size of the piece. Sometimes, it even takes months for the artist to bring his imagination to the real world.

To create such a magnificent piece, the artist requires extensive skill, talent, and patient. Numerous tools and materials, such as chisels, hand-made instruments, hammers, etc. are also needed by the artisans to emboss and engrave the patterns which are designed in detailed.

In some items the engraving is done on both sides of the metal, however, there are also pieces with one side engraving only. In this type, the background is only hammered by engraving steel tools.