Persepolis; One of the Most Ancient Civilizations in the History

One of the most visited historical sites in Iran is the Persepolis which is one of the most ancient civilizations in the world. The monument was the center of the great Persian Empire and ceremonial capital of the Achaemenian.

UNESCO has listed the Persepolis in World Heritage Sites in 1979. Here, you can briefly have an understanding of this amazing and breathtaking complex. 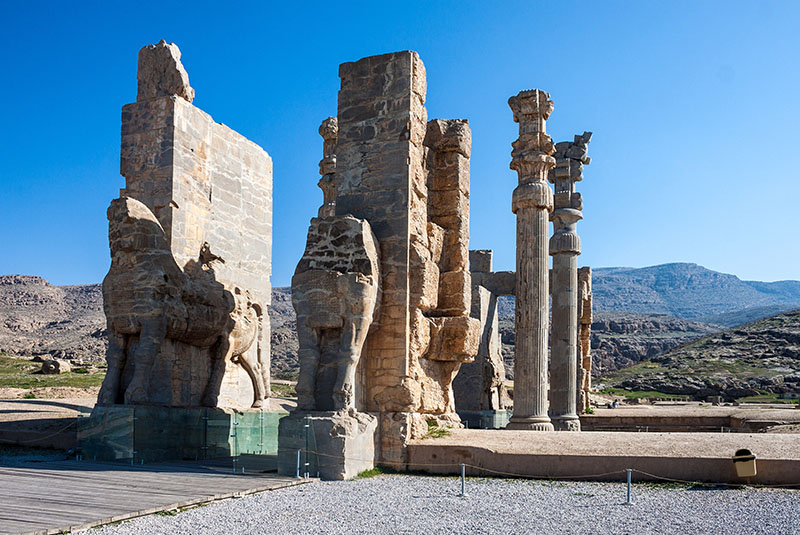 The English word is a combination of Pérsēs and pólis which means “The Persian city”. The Farsi name of Persepolis is Takht-e Jamshid literally means "Throne of Jamshid" because it is believed that Jamshid; an Iranian mythological figure built the monument at the time of the Sassanid period (224-651 AD).

The magnificent ruin of the Persepolis is located at the foot of Kuh-e Rahmat (Mountain of Mercy) in south-western Iran, about 60 kilometers northeast of Shiraz.

If you are planning to travel to Shiraz and thinking of visiting this amazing monument, it is best to rent a car and start your journey by visiting the Pasargadae and then the Persepolis, Naqsh-e Rostam, and Naqsh-e Rajab. In this way, you will have a much better understanding of the whole area.

The History of Persepolis

Andre Godard; the French archaeologist who was participated in the excavation project of the Persepolis during the 1930s, believed that the Cyrus the Great chose the site, but it was Darius 1st who built the terrace and palaces. 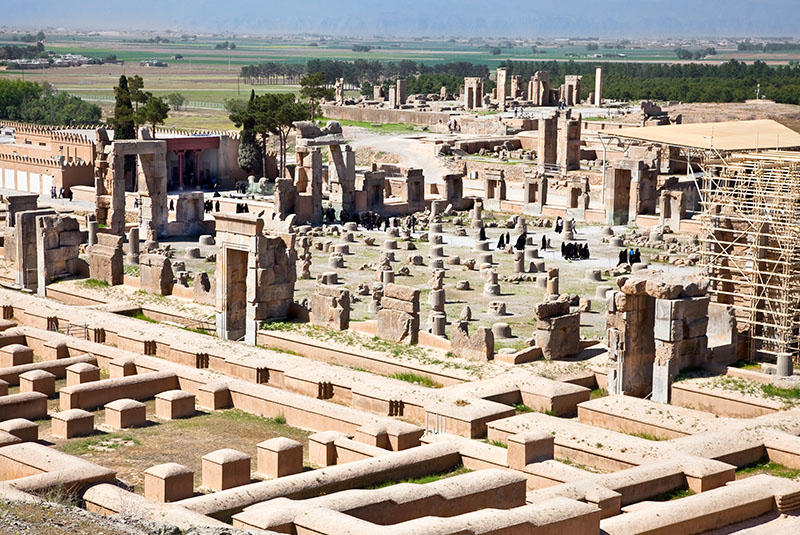 The exact date of the founding of Persepolis is not known. However, it is said that in 519 BC, the construction of a broad stairway started which was initially planned to be the main entrance to the main terrace. Darius, I began work on the platform and its structures between 518 and 516 B.C, although the tremendous task was not completed until about 100 years later by Artaxerxes I.

In 330 BC, Alexander the Great sent the main force of his army to Persepolis by the Royal Road. After being held off for 30 days, he outflanked and destroyed the defenders, and after several months, he allowed his troops to loot the Persepolis.

Many historians believe that, while Alexander's army celebrated their victory with a symposium, they decided to take revenge against the Persians. Therefore, they put the Persepolis on the fire.

In 316 BCE Persepolis was still the capital of Persia as a province of the Macedonian empire. The city gradually declined under the Seleucid Kingdom and after, its ruins attesting its ancient glory.

The Architecture and different sections of Persepolis

The use of the Persian column is one thing that is very notable at the Persepolis. It is believed that the columns were wooden and architects resorted to stone only when the largest cedars of Lebanon or teak trees of India did not fulfill the required sizes. 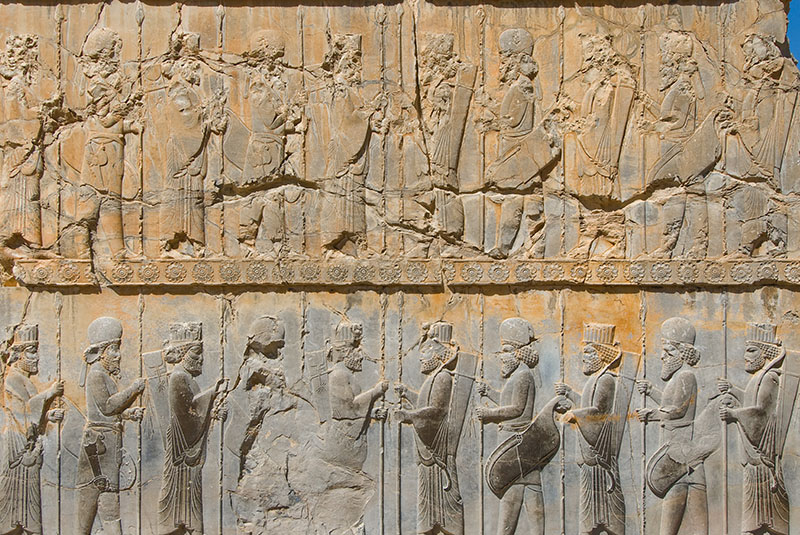 Grey limestone and natural rock were used in the construction of the monument. One of the interesting system in the Persepolis is the sewage system which was constructed with major tunnels.

The monument has different sections; military quarters, the treasury, the reception halls and occasional houses for the King. There are also the Great Stairways, the Gate of All Nations, the Apadana Palace, the Hall of a Hundred Columns, the Tripylon Hall, the Tachara Palace, the Hadish Palace, the Tomb of Artaxerxes III, the Imperial Treasury, the Royal Stables, and the Chariot House.

The dual stairways were built symmetrically on the western side of the Great Wall. There are 111 steps measured 6.9 meters (23 feet) wide, with treads of 31 centimeters (12 inches) and rises of 10 centimeters (3.9 inches). It is said that the steps were constructed to allow the nobles and royal family to ascend by horseback.

The Gate of All Nations

The Gate of All Nations was protected by bulls with the head of a bearded man and mythological creatures named lamassus. The story behind these creatures is that they warded off the evil and that is the reason there were standing at the gate. 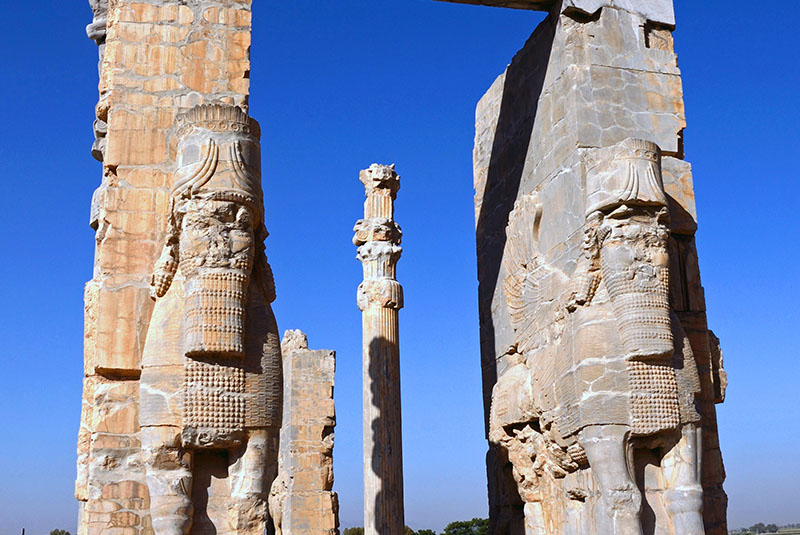 The greatest palace at the Persepolis which was built by Darius 1st is the Apadana on the western side of the platform. The palace used for official audiences. There was a grand hall in the shape of a square and seventy-two columns (only 13 of those are still standing at the platform) with sculptures on the top in shape of two-headed lions, eagles, human beings and cows.

The Hall of a Hundred Columns (The Throne Hall)

The Hall is located next to the Apadana Palace and it is the second largest building of the Persepolis. The construction of this hall was started by Xerxes and completed by his son Artaxerxes I at the end of the fifth century B.C. There are eight stone doorways on the south and north side of the hall with reliefs of throne scenes. On the east and west sides, there are scenes of depicting the king in combat with monsters. This hall was used mainly as the receptions for representatives of all the subject nations of the empire.

The Tripylon ("triple gate") of Persepolis is between the Apadana Palace and the Hall of Hundred Columns. This hall connects these two places and while some historians suggest that it was built after the completion of these two buildings, others argue for an earlier date.

It is said that the hall was a meeting place, where the king could receive his advisers. That is why they call it the Council Hall.

The Tachara Palace was the winter palace which was built by king Darius I the Great. However, he did not live enough to see when it finished. It was completed after his death in 486 by his son and successor Xerxes. In comparison with other palaces at the Persepolis, the Tachara Palace has remained well-preserved. The big stone structures have survived; only the parts of wood have vanished. 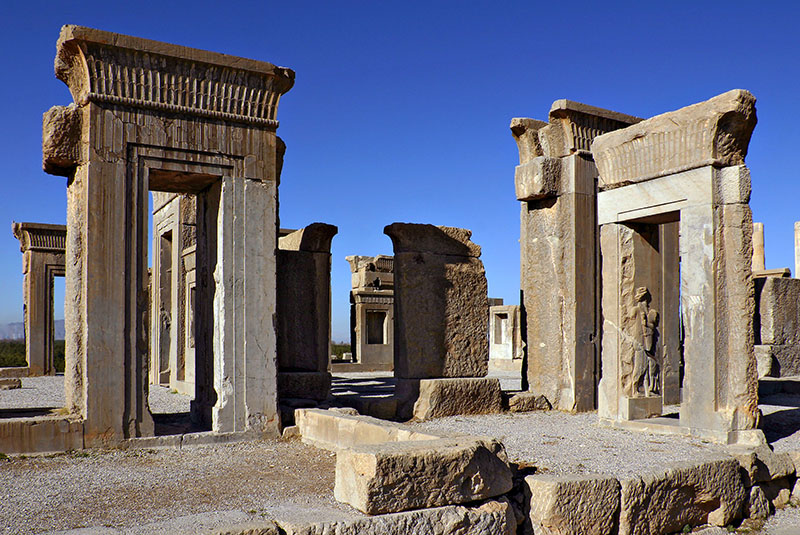 The Hadish Palace (Palace of Xerxes)

Just adjacent to the Throne Hall is the Imperial Treasury which functioned as a royal storehouse of the Achaemenian kings. The tremendous wealth of the royal family kept here came from the booty of conquered nations and from the annual tribute sent by the peoples of the empire to the king on the occasion of the New Year’s feast.

In addition, the Treasury was used as a Court of Reception. Two large stone reliefs were discovered here that attested to its function. These depict Darius I, seated on his throne, being approached by a high dignitary whose hand is raised to his mouth in a gesture of respectful greeting. Behind the king stands Crown Prince Xerxes, followed by court officials.

Where to eat near the Persepolis?

Usually, people start their visit to the Persepolis in the morning and end it at noon when it is lunch time. If you are going to do the same, you should know that there are plenty of Iranian restaurant around the place. To name some; Parsian Restaurant, Laneh Tavoos Restaurant, Traditional Persepolis Restaurant, Pizza Host Poem Restaurant, and Hakhamanesh Traditional Restaurant 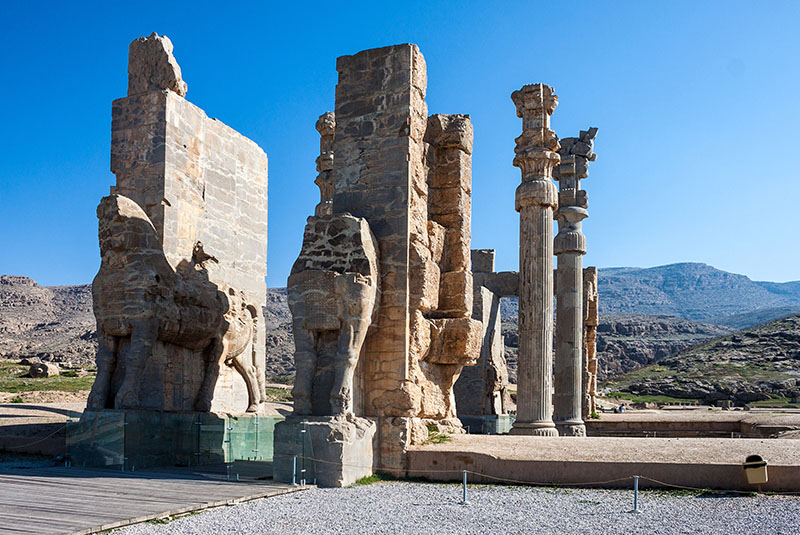 Where to stay near the Persepolis?

If you prefer to stay in Shiraz, we suggest you check on our page: The Top 10 Hotels in Shiraz.

Address and Opening Hours of Persepolis

Closed on some Public Holidays